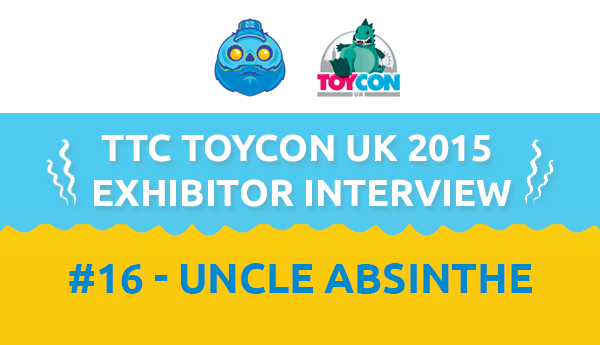 Our favourite bearded brother, Uncle Absinthe, will be back at ToyConUK again in 2015. The Toy Chronicle cannot wait to see what wonderful leafy goodies he brings with him. Not tooting the big man’s horn, but his art sold out in super quick time last year, if you have your eye on one of Uncle Absinthe’s goodies, you’d better be speedy or face missing out & crying in the streets of East London. Uncle Absinthe: I’m just a Beard that grew a Man many moons ago. I studied Food not Art and I seem to have gone on holiday by mistake but I’m enjoying the trip.

Uncle Absinthe: I blame Tea….or more precisely a Lunartik in a Teacup! My first ever custom was for the “Great Tea Trade” organised by Gordon Fitzgerald about 4 years ago. To my starry eyed surprise people liked what I had created and even Mr JOnes himself gave it the thumbs up. This in turn gave me the push that started the leafy ball rolling! Uncle Absinthe: I’ve got a cheap and nasty carpet knife that I always end up using ……its my rusty Excalibur….

Uncle Absinthe: That’s a tricky one, I’m not good with favourites but a Lunartik is always fun to do as there are so many pieces to play with. The vinyl Cavey is a lovely platform too, I’ve had loads of fun customising those. One of the most exciting platforms that I had the pleasure of fiddling with was the mighty War Tourist created by Planet Domu & Run DMB for the first ever ToyCon and fingers crossed I might be doing another for this years show. There will also be a brand new platform on the Buhna & Beard booth this year the “Bonha Skully”which has been created by my partner in crime Gary Blue Frog Boon, so don’t forget to come and check them out on the day! Uncle Absinthe: I love the idea of collaborations and have one on the go at the moment with David Stevenson for ToyCon this year which is very exciting indeed! As for future projects….I’m not sure who would have me haha! Uncle Absinthe: Its sounds odd but I think its the show itself, all the positivity that came from Toycon last year has influenced me to keep creating and make sure 2015 is even more glorious.

Uncle Absinthe: There will be lots of new things this year including the Watchers in the Woods… Dead Heroes and a couple of cheeky Robots…..and you never know a certain Shit Unicorn might show his face! Uncle Absinthe: The Toy Family! Apart from being a showcase of amazing designer toys and art work ToyCon is for one day a home to some of the nicest people to crawl out of the primordial ooze and walk on two legs…. I just cant wait to get elbow deep in that ooze!

Uncle Absinthe: It would be great to get Bryan Brutherford or Ryan Rutherford over they sound pretty cool ……cool as Ice Scream in fact!

Uncle Absinthe: My Eric So Hellboy ….he was born in Hell but I dont think he is quite fire proof.