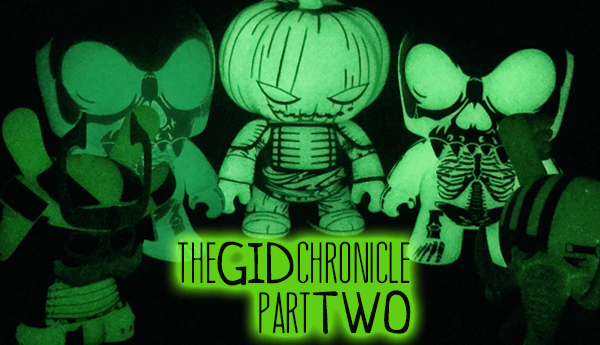 As we hit the Christmas period, we decided to LET IT GLOW! Our second part of The GID Chronicle hits your eyes today. Part Two features the production work of Jon-Paul Kaiser. Before we begin, let’s take a wee look at what the JPK pieces look like before we hit them up with some black-light action to light them up. We’ve taken five pieces from the mind of JPK, each with a varying successful range of their glow-in-the-dark-ness. 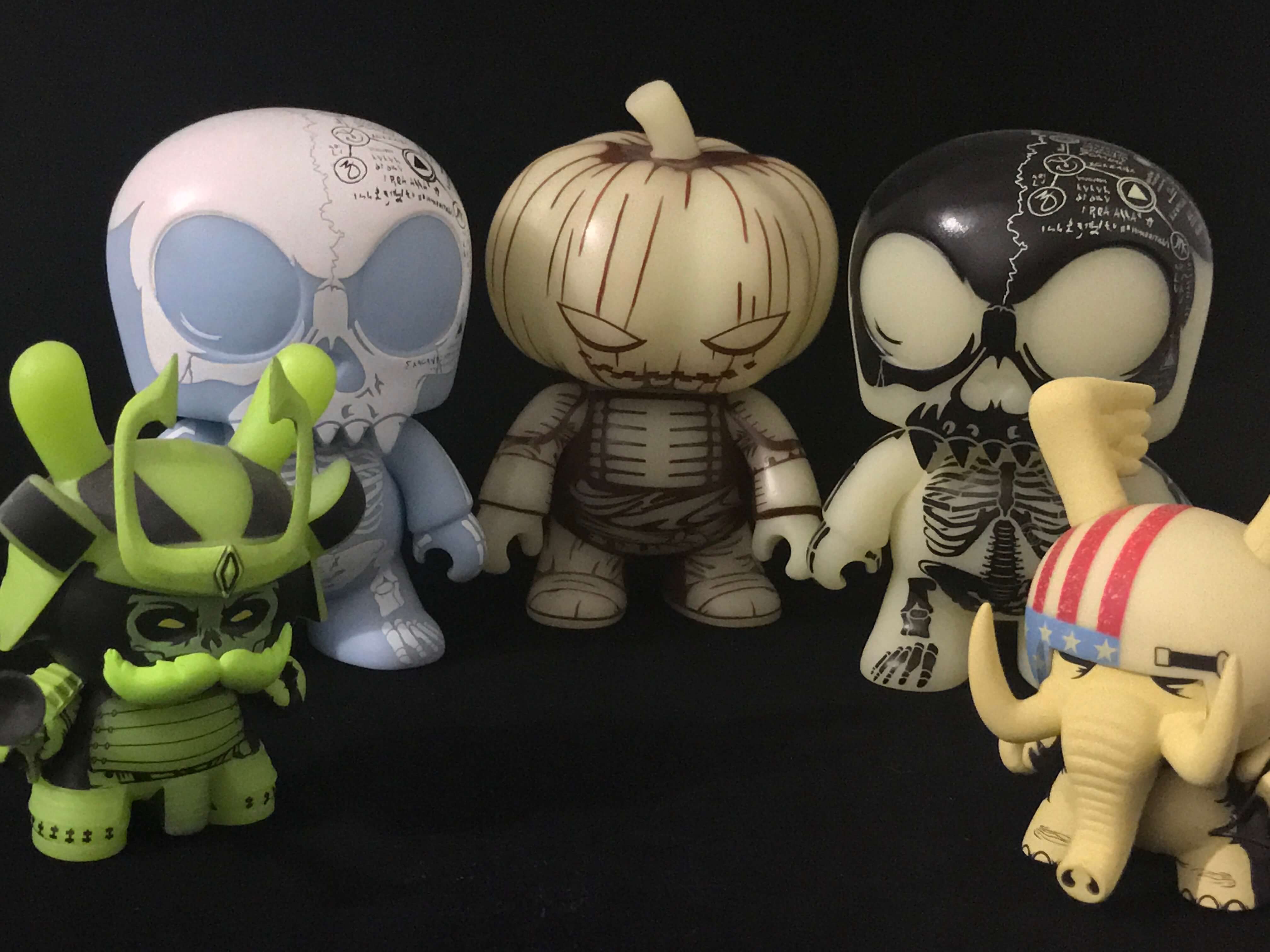 The GID Chronicle features glow in the dark pieces, either from artists or companies. They could be production pieces, resin or custom. I’m sure we’ll figure out other GID avenues to investigate too. We’ve already got a number of GID pins from artists within the Designer Toy community – we’ll probably need a few more before we can make it a feature. Who makes GID plush? Anyways, back to JPK, right? We start straight away with our favourite of the group. The 5inch Samurai Pumpkin Gee from Toy2r. Boy did this light up. Not only light up but also kept that glow throughout. A great job. The GID emphasised the design very well.

The Toy Chronicle have a special one-off JPK production piece. A Scribe GID Prototype that we won a few years ago. The GID was a bluer in colour rather than the traditional GID green-y colour. The GID did last through the spin. The original GID Scribe, which had an edition size of 500, also had a really good glow to it. A nice original pop. Both very nice Qee pieces.

The next two Jon-Paul Kaiser pieces come from Kidrobot, and whilst these two pieces are very nice as stand-alone pieces we were not very keen on the glow in the dark aspect for both. We’ve got the Ashigaru GID Green Dunny from the Kidrobot 2012 Dunny Series.Whilst there was an original glow, it didn’t last. We were seriously hoping for better with these two. We also used the Locadonta Chase Dunny from the 2013 Sideshow Kidrobot Dunny series. Again, started off with a glow but this didn’t last. Shame. Compared to the Samurai Pumpkin Qee and the two Scribe Qees, the two Kidrobot produced glow in the dark didn’t live up to our expectations. Like we said, they do sit nicely as stand-alone pieces, rather than GID. Perhaps if you’re going to do GID, do it right or don’t do it at all.

Part Three of The GID Chronicle will come in the near future. Be sure to keep an eye on TTC, so you’ll see it when it drops. Part Three will focus on a number of GID resin releases! Can’t wait to watch them glow! If you would like your own GID creations involved in The GID Chronicle, you can donate them by emailing [email protected] and we’ll send you our details. Peace x