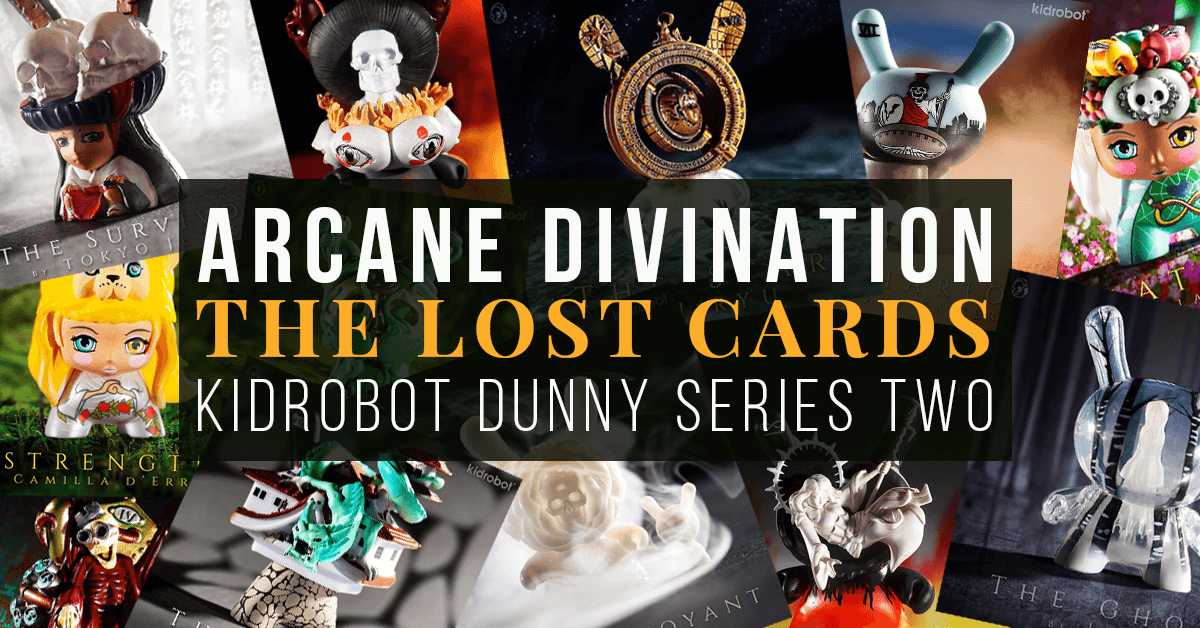 Whilst in New York last month, we were fortunate enough to get our TTC hands on an early release case of the new Arcane Divination – The Lost Cards Kidrobot Dunny Series Two and I think it’s fair to say we were impressed!! Following the DTA award winning Arcane Divination Series 1 in 2017, curator J*RYU got his band of artists back together for another sling at the lost tarot cards in this new Kidrobot Dunny 3inch blind box series. Adding Doktor A to the already formidable crew of JPK, Camilla d’Errico, Tokyo Jesus and J*RYU was an absolute power move. The now DTA Artist of the Year 2019 brings his A* game, as do all the other artists in this Dunny series. That much is a fact.

You can check out our Youtube unboxing video that we put together below.

Arcane Divination Series 1 was already bonkers good (read HERE) and we saw some insane new sculpts being put to good use in the first series, but something about The Lost Cards feels like each of the artists knew they had the trust & respect of J*RYU and Kidrobot, following the success of ADS1, to further push the boundaries of what a Dunny could be and they’ve achieved that with this new Arcane Divination series. If ADS1 was great, ADS2 transcends the Dunny platform altogether into a new realm of possibilities. Each artist should be thoroughly applauded for their efforts with this new series. I don’t think we have ever seen any Dunny Series like this, and doubt we will ever again as it’s just so good. That’s not to say there will never be another great Dunny Series in the future, because there will be but it would take something rather special to beat Arcane Divination Series 2! Could they follow up their 2017 DTA Best Mini Series win in 2020? Quite very possible. Very possible.

Arcane Divination Series 2 will come in cases of 20, rather than the usual case of 24 which will see the price drop almost $50 for a case, and the ratios are now in multiples of 20 too. Blind boxes are priced at $11.99, with a case being around $240. The new series drops at 10am MST (5pm BST) over at Kidrobot.com (as well as available at select Designer Toys stores such as myplasticheart, Tenacious Toys, Martian Toys, Mindzai & Collect and Display).

Now lets take another at the Dunny that will make up this marvellous Arcane Divination The Lost Cards series, shall we?! We shall!

The World (design by @camilladerrico) represents a convergence of the world within you and the world you reside in – enlightenment. Your understanding of how the entwining of these two entities leads to balance and harmony is key, and eventually, will lead you to true fulfillment and contentment.

Nature represents the primal essence of which all living things emanate from, and how we give and take from this power. The balance of life delicately hangs, determinant upon the decisions we make to either nuture or destroy. Humility and recognition of how we wield this power to enact change is the key to respecting our true origin.

Strength represents one’s own inner resolve, bravery, compassion and focus. Can you muster up the courage to face one’s fears head-on on your own? Or will you succumb to the doubts that reside deep within?

The Star (design by @JRYUART) represents a true understanding of the blessings that already exist in your life. The chaotic nature of living can easily lure us into coveting temporary pursuits, but in the end, the things that are most fullfilling are right in front of you. The meandering path through dark and rough waters is never in doubt, for since eternity, you have always known deep down how to find your way home.

Side note: the three people on the boat are J*RYU, Linda & Koji. There are cities engraved on the head, and these are J*RYU previous long term homes with Polaris also being the north star. A very personal Dunny for J*RYU.

Ab aeterno is latin for “since before time began” or “from eternity”
and then the figure in the boat is pointing towards the ear and the star
but, the piece is also a commentary on how man goes to such far lengths with technology and tools to help us find our way home but in actuality, home is where my loved ones are, no matter where they are physically in the world and “ab aeterno” is the notion that we as humans have always known what is most important but thru history, we have just made it more difficult on ourselves or convinced ourselves that we have to go the long long long way, to get home. which often times is right in front of you.

The Ghost represents the unresolved, the conflicted and fragmented memories that remain indelible in one’s heart and mind. The inability to find solace is made more poignant when one considers the sheer resolve in defying the mortal coil after death. The Ghost is a spectral reminder to others to find peace and resolution while one still has the chance.

The Clairvoyant has borne witness to many things that have passed, and peers into the future to divine what is yet to come. Portending true insight into one’s fate without interference, the Clairvoyant serves as a dutiful guide, through the light and dark times ahead.

The Emperor (design by @doktor_a) represents having an acute understanding of control and structure. Using your wits and mind, strategic decisions and rules you set forth can give you the answers amidst the chaos that is life. Will you rule with authority, or will you rule through tyranny?

The Tree represents the cyclical nature of life, death and rebirth in a never-ending cycle of opportunities missed, and opportunities gained. The unyielding tendrils of life will always find a way to constantly reshape, remold and redefine us. The ambitions that failed or never materialized in the past may find fresh footing in the future. The cyclic life force repeats, transmuting energies, transferring potential – from, through and within all things. Opportunities return, second chances are granted and ideas take shape in new forms.

The Survivor (design by @tokyo_jesus) represents the unrelenting need to survive at all costs, even if it means that you have to delve deep into dark places to succeed. Despite being left with little to call your own, your pride and perseverence to live honors not only yourself, but those who love you. Would you buy a skull from me today so that I may breathe tomorrow?

Justice represents the search for truth in the decisions that you make. Will you let the mouths of others whisper doubts into your ear or can you drown out undue influence in order to come to the right decision on your own? No one is above judgement, not even you, so let your conscience be the guide that reveals the truth.

Fortitude (design by @jonpaulkaiser) represents the understated virtue of inner strength. It is a subtle power that is easily overlooked and often only comes to the fore in times of adversity. Having a core strength of faith and resilience that is not to be confused with stubbornness nor being headstrong. Fortitude represents an unwillingness to compromise one’s own integrity, even in the face of oblivion.

The Chariot represents having an understanding, or lack thereof of your surroundings. How you address issues that arise, whether it is with sheer willpower or giving into aggression, will ultimately guide you in the right direction through life’s many twists and turns.

The Tower represents a significant change in one’s life, seemingly coming out of nowhere but nonetheless, has to be addressed and acknowledged. Perhaps you knew all along that this was inevitable, but how you address this seismic shift will reveal your true character.

J*RYU will be running a live unboxing tomorrow (Friday 21st June) at 3pm PST (11pm BST) on his Twitch account HERE. Go hang out with J*RYU as he unboxes this awesome series. Ask him questions and let him give you a personal insight into this Arcane Divination The Lost Cards series!