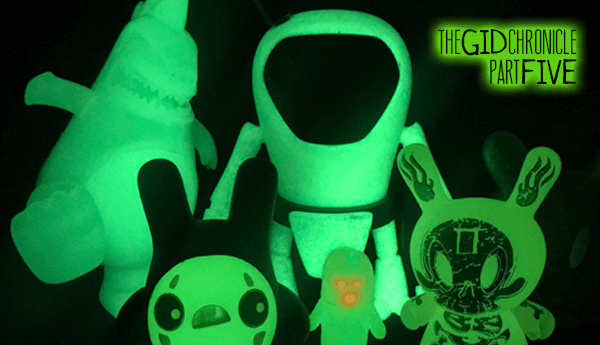 Well that was a crazy few weeks, right? We are six weeks since the fifth edition of ToyConUK took place in Bethnal Green and it’s fair to say that a whole bunch of crazy good has happened since that great weekend in April. When we had the chance to leave our TTC booth at TCUK, we made our way around the York Hall to pick up some beautiful pieces of art. As with most cases, our aim was to pick up our fair share of GID. ToyConUK 2017 didn’t disappoint. So we bring you The GID Chronicle Part Five – The ToyConUK 2017 Edition! 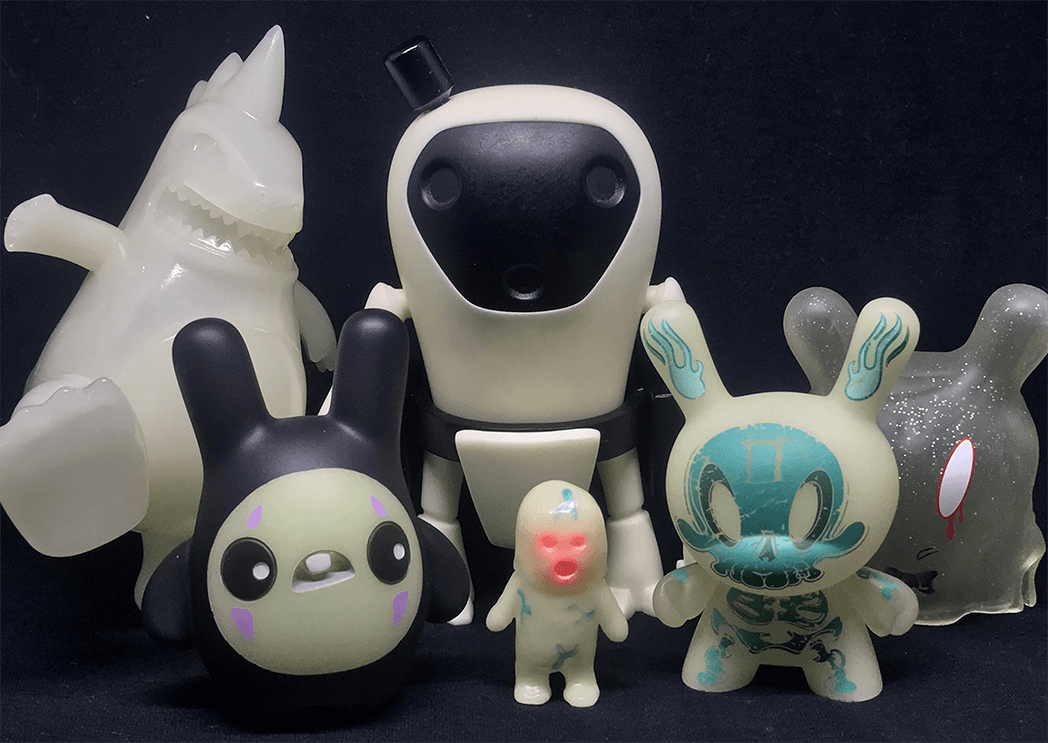 As with all our editions of The GID Chronicle, we like to give you a glimpse of the artefacts we’ll be glowing today, in their un-GID form – which you can see above. 2017 saw the TCUK Mascot – TCon – get the GID treatment (actually not once but twice this year). We have Dolly Oblong’s No-Face Baldwin with his cute lil GID face. How about that GID Beanbot by Ghetto Plastic? Also, we got our wee little fingers on the Chibi Menta by Dehara Yukinori (try saying that with your mouth full!). Last but not least we have the production Kidrobot Dunny by Brandt Peters from the #13 series – Grisly Phantom! How do they rank in The GID Chronicle, we hear you cry! As you’ll see below, they rank well!

Finally, a TCon Blank in GID! We’ve waited five years for this day. The ToyConUK boys didn’t disappoint either. We hear that this GID TCon will be the blank to move forward, so more GID goodness for TCon! A reallllly nice glow for TCon GID too. There was a second GID version, but in our drunken TCUK stupor, we lost the one we purchased. Regardless, we’re happy that TCon now sits in a GID version!

Is it ironic that Dolly Oblong used No-Face as an inspiration for this piece, but in fact it’s the ACTUALLY FACE that glows like a beautiful morning sunrise!?! We love it. So cute, so glow!

Something a little original from Ghetto Plastic. We fell in love instantly with Beanbot. The simplicity of Beanbot holds our love, add in the GID and you’re forever ours. A great GID glow going on too for Beanbot.

Standing at an inch tall, Chibi Menta has all the looks and all the glow. It’s amazing that even for such a small piece, considering the size of ToyConUK and everything going on that weekend, Chibi still jumped out & spoke to me. He whispered in my ear from the booth of Kaiju Monster, how was I to disagree.

Took me forever to get Grisly Phantom to let his phantom float. Ha. We were looking to purchase some glorious Blind Box action from Minty Fresh, however, we noticed that they’d already unboxed a number of the Number #13 series by Brandt Peters x Kidrobot and our favourite was sitting there on their booth – waiting to be picked up! So we did just that. Picked it right up. Probably just walked away with it too. It’s a shame that the phantom aspect doesn’t glow too, but the actual 3inch Dunny has a great glow. The design by Brandt allows the design to remain once the glow hits. Bonus points.

The next edition of The GID Chronicle will see us take on our GID haul from Five Points Festival in NYC last month. I picked up some beauties that weekend, it’s going to hopefully be a shining success! Stay tuned x