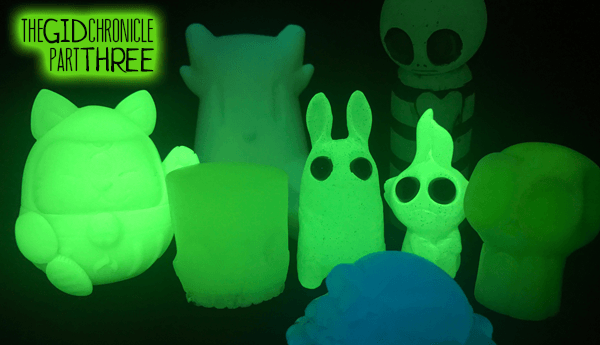 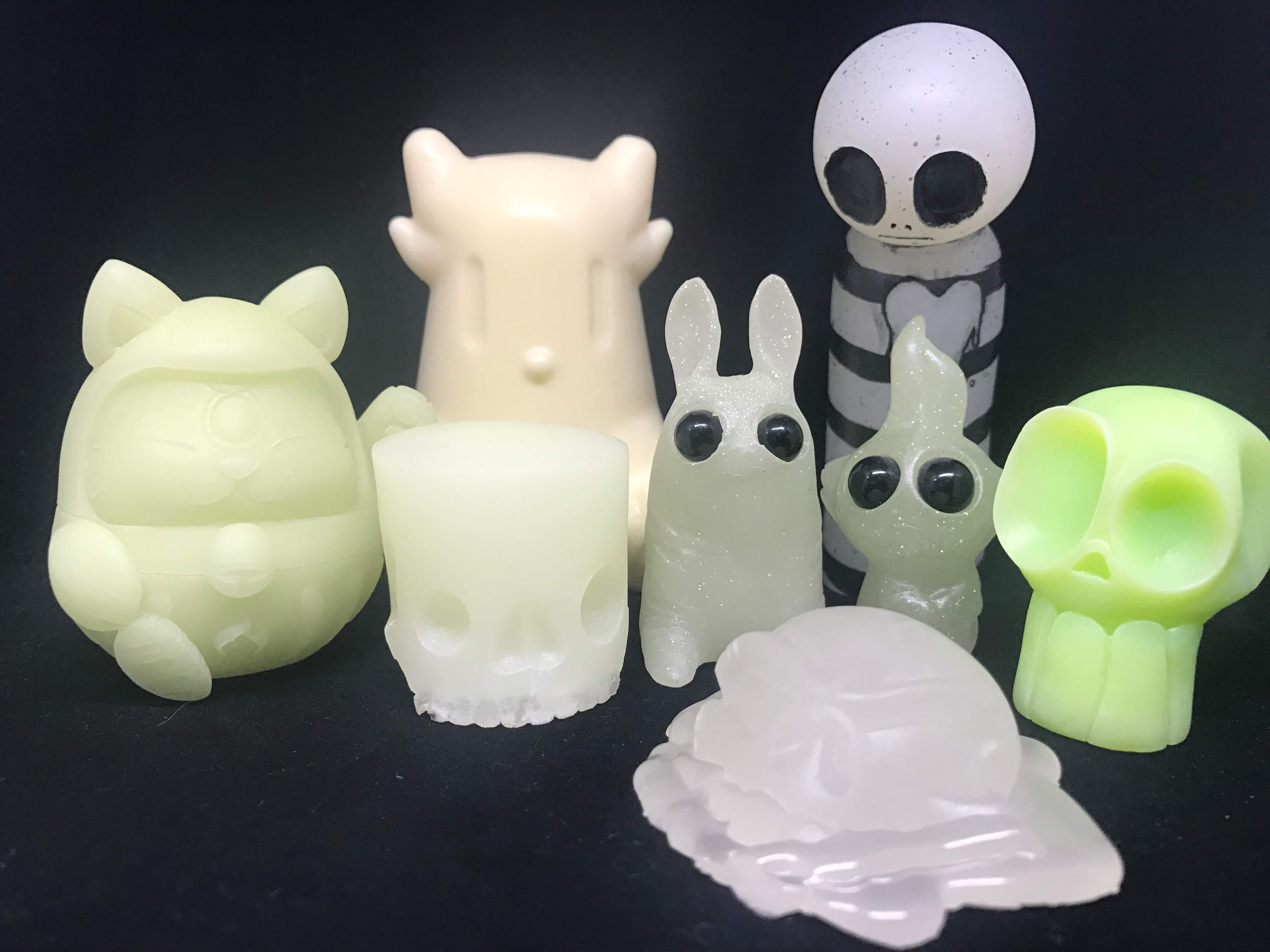 One of our pick-ups at DCon 2015 (well two really) was this pair of cuteness courtesy of Chris Ryniak & Amanda Louise Spayd. Bugbite & Pipsqueak! They are both fantastically cute in their non-GID glitter form, but once they had their time on the Wheel of GID™ they really came to life. They’ve both got that glow that we all love. We still need to work on our photography skills to capture the GID better, that’s something that we’re looking into, as the GID is so much better in person. We really like that Pipsqueak & Bugbite keep their glow during their spin. That’s what we want to see. They both also kept their glow once we removed them from the Wheel of GID™ too. Nice job, Chris & Amanda.

We go back to May 2016 for our next GID piece, with the release of GID Fragile Am I by Davemarkart. Originally design by Dave, Fragile Am I GID has been sculpted by Nemo and then resin cast by Dead Hand Toys. Fragile Am I GID certainly did better than expected. We’ve had the piece some time now, and stood next to other GID pieces in our collection it didn’t look like it would stand up against them. However, given its chance Fragile Am I GID did have a decent GID shine.

Ha. well another DCon 2015 pick-up (yeah we went for the GID hard at DCon that year) is another skull design but this time from Diablo Texas. There was a little bit more going on with Diablo Texas’ skull. Even in a 1.5inch resin piece, the design was real nice. The glow defo had a beautiful neon green going on. Also, if you wanted to pick up one of the GID skulls from Diablo Texas, you’re in luck. Not only are they available, but you can pick one up for FREE! You just have to pay for the shipping. Nice & easy. You can pick one up from the Diablo Texas store HERE.

Most of our GID collection has the lime green glow going on, but not the next piece from JFury. We’ve got a blue glow! GID skulls were all the rage at DCon 2015. Ha. Another DCon pick up. Our eyes were obviously drawn to the GID through all the masses. We couldn’t help ourselves. JFury has done a great job with the glow too.

Our last entry into this edition of The GID Chronicle was a Kickstarter campaign we backed in 2016. Just Toylab brought to life Dink with the help of Kickstarter. We backed the GID version, obvs. It wasn’t as impressive in the GID department. It’s a real heavy solid resin piece, and we really had some high hopes but Dink didn’t satisfy our GID needs.

So that is resin edition of The GID Chronicle over. We’ll probably come back to the resin section again, as we still have numerous GID resin pieces in our collection that deserve an outing. We’ve got an idea for our next edition, though. Keep your eyes peeled on The Toy Chronicle for the next GID Chronicle 😀 x