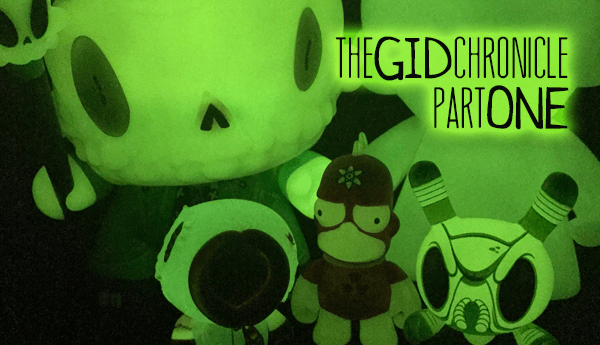 The Toy Chronicle have never hidden the fact we are in love with anything GLOW-IN-THE-DARK. So we figured we’d do something about our love. We want to find the ultimate GID piece. The one that shines the brightest. We wanna see the glow. So, let us introduce you to The GID Chronicle. A regular segment we’d like to introduce to your weekly Designer Toy read. We wanna pit the best of the GID releases against each other. For Part One of The GID Chronicle we’ve taken a number of Kidrobot past & present releases, as Kidrobot were kind enough to send over some of their newer GLOW-IN-THE-DARK releases. Kind buggers. Thanks Kidrobot! 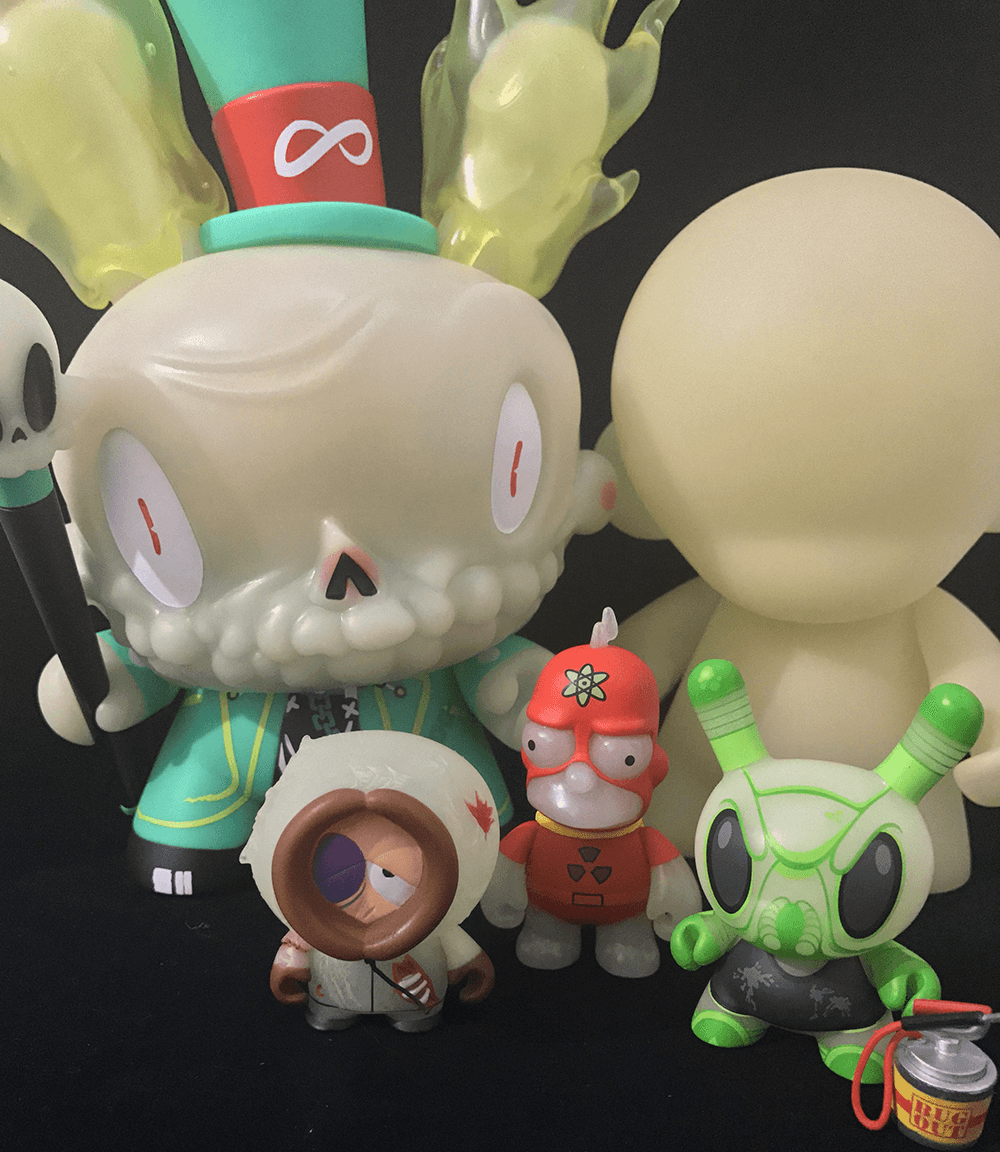 However, before we take a GID look at each piece, why not take a look at the pieces in their ‘normal’ state. As you can see in the image above, we’ve gone old skool with the GID 7inch Munny, Kidrobot x Brandt Peters’ 8inch Lord Strange, NYCC 2011 Kidrobot Exclusive Dead Kenny, NYCC 2016 Kidrobot Exclusive Radioactive Man & DCon 2016 Kidrobot x Scott Tolleson Exclusive Bugga Bugga! For our GID Chronicle, we’re interested to find the GID piece that will take the glow, and keep the glow too. It’s not always possible, but we’re looking for the GID to enhance the piece too. Our set-up includes a rotating platform to allow for our 360 image (which you can appreciate below). Each piece will get one rotation being blasted with a black-light torch. The rotation takes around 60 seconds.

One of the newer releases from Kidrobot was the collaboration they did with Brandt Peters bringing Lord Strange, from The 13th Dunny Series, to life. Lord Strange has had three incarnations over the course of the past year. The white version which dropped at NYCC 2016, which we covered HERE. The OG version dropped way back in May time, and the GID version which dropped this past October. Kidrobot & Brandt have a done a great job with the GID version. The sculpted mask is also GID, along with the Skull walking cane accessory that comes with Lord Strange. GID-wise it’s pretty impressive. It retains the GID for a decent amount of time. Whilst the GID Lord Strange is no longer available to purchase, you can grab the original Lord Strange colourway by Brandt Peters on the Kidrobot store HERE for $75/£60.

How about the NYCC 2011 Exclusive – Dead Kenny. Limited to 1000 pieces, Dead Kenny was and still is hot property in the Designer Toy scene. Originally released in July of 2011 with the OG colourway, Dead Kenny was sculpted to look every bit the worst for wear, Dead Kenny features exposed brains, bloody ribs, authentic cuts, scratches, and scrapes, and an arm that falls off the bone. At the 2011 New York Comic Con, Dead Kenny was given the glow in the dark treatment. Thankfully TTC was in attendance at NYCC in 2011, and was able to add GID Dead Kenny to our collection. Whilst the GID struggled towards the end of the rotation, the figure is still pretty cool sitting next to the original colourway at TTC HQ.

The design of Scott Tolleson’s Bugga Bugga really works for the GID-ness. The glow in the dark aspect really highlights the figure well. It doesn’t need to have the GID to appreciate the design. The nice green crisp line work. The GID really pops, and whilst it fades towards the end of the rotation it did retain the GID much longer than some of the rest we’ve taken a look at today. For those unable to attend DCon, you’re able to pick up the Scott Tolleson GID Bugga Bugga 3inch Odd One Dunny on the Kidrobot store HERE for $14.99/£12 each.

The iconic Kidrobot 7inch Munny in all its GID glory. We would have liked to see the Munny retain its GID for longer, and glow much brighter but this is a much older release and appears to be a different GID material to the rest of the releases today, so we are thinking that perhaps over the years it’s lost its glow.

It’s a toss-up between Lord Strange and Bugga Bugga when we have to decide our favourite GID piece this week. If we had to only pick one, we’d go with the Brandt Peters’ Lord Strange. It’s a really fun piece, and the GID-ness works extremely well with the design. It’s 8inches of beautiful GID. What do you think? Let us know in the comments.

If you think you have a GLOW-IN-THE-DARK piece that will smash all the other GID pieces, and you’d like to donate to The GID Chronicle segment for us to test your theory out, you should email your details to [email protected] and we’ll get back to you with the important details on where to send them.

Part Two of The GID Chronicle will feature the glow in the dark art of Jon-Paul Kaiser! Keep your eyes peeled to The Toy Chronicle for when it drops.