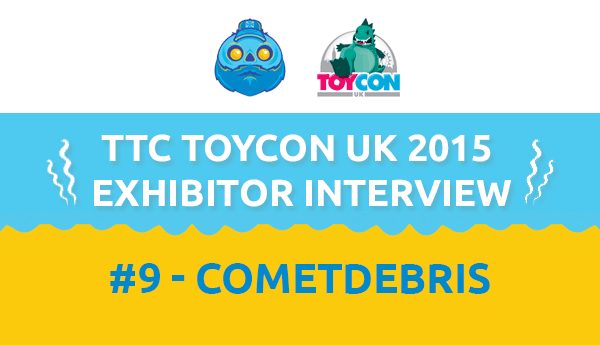 We are now in the three week territory before ToyConUK 2015! Three short weeks to deal with before we get to encounter some beautiful Designer Toys from UK artists & Exhibitors (and also those around the world too) descending upon Bethnal Green on Saturday 25th April. One of those worldly exhibitors is Comet Debris. Comet Debris aka Koji Harmon was a smash hit with his Japanese Soft Vinyl (Sofubi) at ToyConUK 2014, so will re-joining us at 2015. Bringing even more joyous sofubi with him. We caught up with Koji for a few short words…
[frame align=”center”]

[/frame]How did you get in to the Designer Toy scene?Koji: I went from collecting toys to wanting to make my own toys to display alongside my collection.

What is your ‘go-to’ tool when customising / creating?

What is your favourite platform to customize?

Koji: Cometdebris fans from the UK and Europe.

Koji: One of the few toys remaining from my childhood, maybe a squeaky rubber Mickey Mouse or Donald Duck.

Comet Debris can be found on Facebook, Twitter & Instagram.
Don’t forget, if you want to catch of the exclusives from Comet Debris, you’ll need to be actually in York Hall on April 25th. These usually don’t last long. Those Sofubi-loving folk are quick off the mark. So ensure you get in by getting yourself a ToyConUK ticket HERE before they sell out and we see you crying on the streets of London.