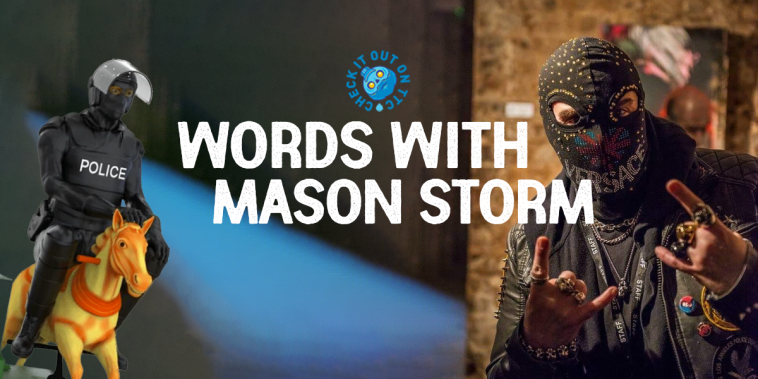 Last week we brought you details of new release with Angry Cat x Toy Asylum with artist Mason Storm in the form of RIOT RIDER (read HERE). We were intrigued with Mason and his style, so caught up with him for a few words to find out a bit more about the Riot Rider release & Mason. Check out our TTC Words with Mason Storm below…

Congrats on the release of Riot Rider! Whilst you’ve worked on customising Designer Toys in the past, this is your first foray in to production with Toy Asylum, tell us about how it came about?

I’ve been working with Simon at Reload Gallery and he was approached about sourcing artists who could add a new exciting element to the toy market. As I’m a kid at heart, it seemed like the perfect combination, I jumped at the chance.

Tell us the story behind the piece itself, Riot Rider?

I’ve had been involved in law enforcement in one form or another for many years and also the art world and more precisely the urban art world. I’m also a fan of Banksy who created a similar piece so it seemed like a brainier.

From what we’ve seen of your work, we’d say you were primarily a 2D artist, but moving into the 3D world with Riot Rider. An interesting move for you?

Visually you are quite art yourself in your look & style, but behind the mask who is Mason Storm?

What & who inspires your art & life?

There are tons of things that inspire me, everything from classical art to anime, music, movies, and the madness going on inside my head.

Part of Riot Rider release is an NFT, where is your stance on the growth of NFTs in recent times? Do you collect NFT too? Any artists who we should be watching in the digital world? (Editor note: the NFT aspect of Riot Rider has been currently shelved at the time of publishing this interview)

I think the rise of NFT’s is an exciting one, the ability to collect non physical artworks is democratising art as anyone can create one. So many people live so much online these days that it is a natural progression.

The world feels like it’s burning at the minute. What’s your take on where we are at as a world?

The world has always been in a state of flux I think we are just more informed now, I just hope we can find a way through the quagmire or violence and intolerance, and if not then it’s up to the creatives to document and comment on it. Often times great art flows from unrest.

If you had to partake in a bout of Rock, Paper, Scissors with Banksy, who would win?

Banksy would win, there are a lot more Banksy’s then there are Mason Storms and he’s got more lawyers than me

What’s next for Mason Storm?

I have a big show coming up in 2023 and am creating a lot of paintings as well as some accompanying full size figures to go along side them, I’m really excited about the new work.

Thanks Mason for your time! Great chatting with you!

Thanks for the interview, I don’t get out much!

If you’re interested in adding Riot Rider to your collection, you can secure yours over on Angry Cat store HERE.

Riot Rider stands at over 8.5inches tall (22cm), this depiction of a police riot riding on the coin-operated horse ride is made from vinyl. Each are hand painted and have the artist signature engraved on the base of the figure. Produced by Toy Asylum, and sold via Angry Cat, Riot Rider is limited to 500 pieces, each with a numbered certificate of authenticity.

Priced at £479.99, with the pre-order open NOW over on Angry Cat. The expected shipping of Riot Rider is to commence in early 2023. 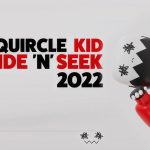 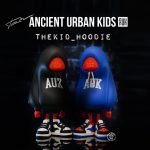