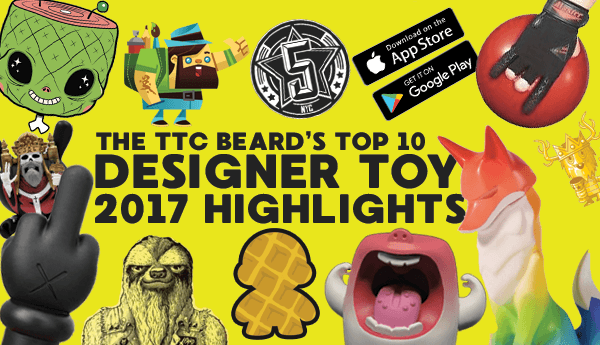 Well, 2017 is pretty much done now. As I’ve spent the past few days packing up my Designer Toy collection (long story short, but building works on our apartment next week), I’ve reflected on the past 12 months and how much fun I’ve had in the Designer Toy world. Be it through awesome releases from awesome artists or global Designer Toy events that I’ve attended this year. I’ve picked my Top 10ish highlights from the last year and wanted to share them with you below! It’s been a special year, and waaaay more than 10 highlights but these are the list that really captured my heart & imagination since January 2017! Please enjoy! 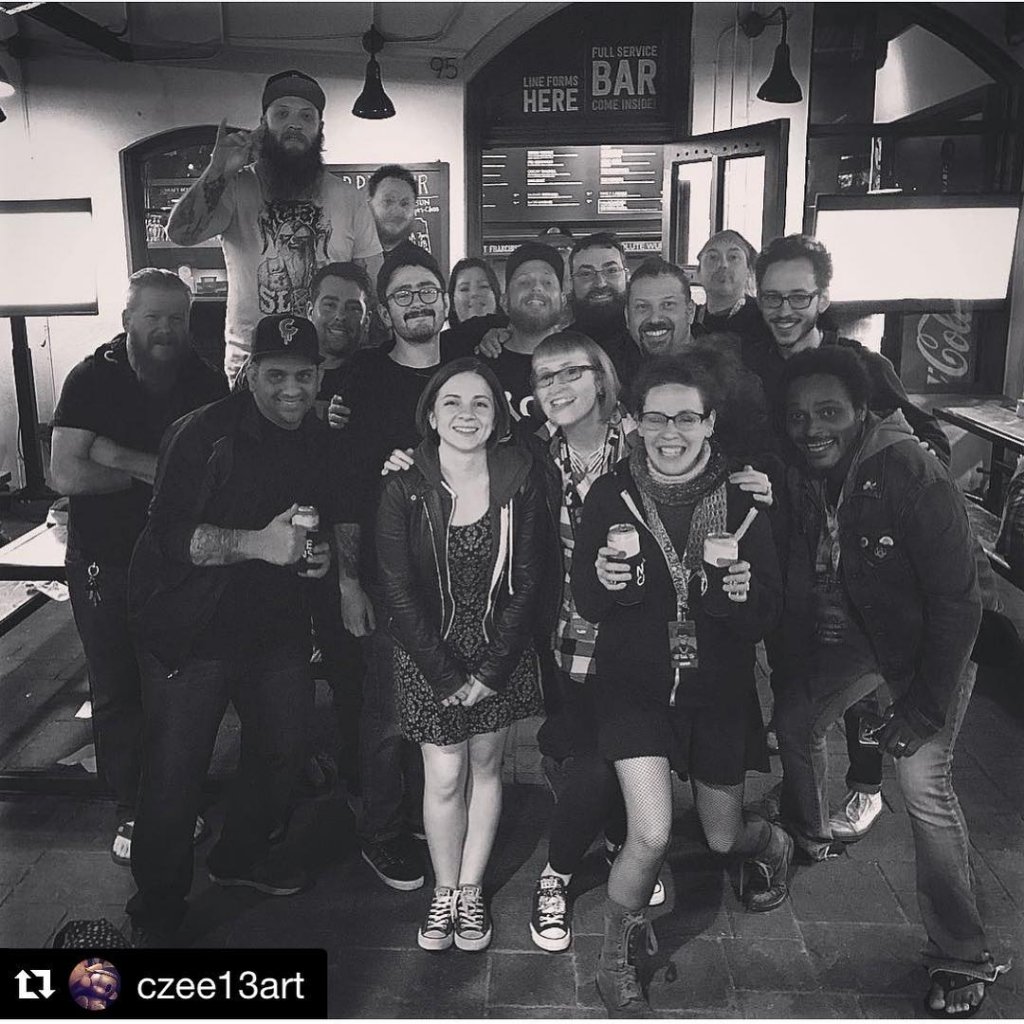 Whilst it feels like a million months ago, DesignerCon 2017 was only two months ago. Wish we were still in Pasadena. I’ll be honest here, a day of my trip to Pasadena/DesignerCon was spent dying in my hotel room full of hangover! Ha. It was a pretty deathly hangover, trust me. Yet that weekend in November was an absolute blast. I got to hang out with some great folks – most of which you’ll see in the photo above. 2017 wasn’t the only time I got to hang out with this krew (see #1) but it was definitely one of the best weekends for krew laughs. They’re a family of awesome folks, ones that I’m very happy to call friends. Roll on DCon 2018! 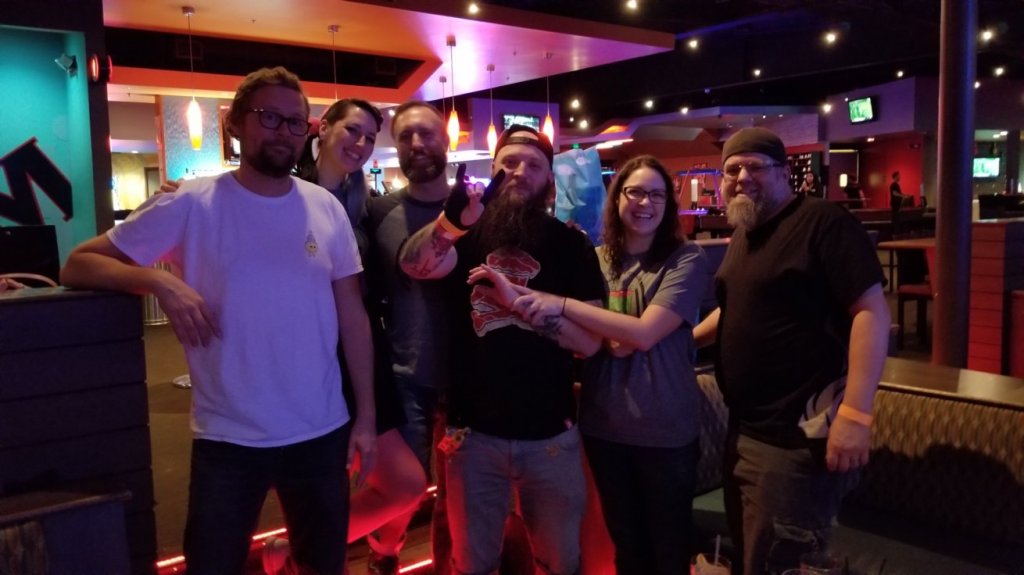 During the festivities of DesignerCon, Marsham Toy Hour (see point #9) hosted an after-party at a local Pasadena bowling alley. Now, I love my bowling. I’m not great at Bowling, but I have my set stance on how I bowl. I also own a bowling glove – no judgement! Referring back to my #10 highlight and my deathly hangover, I had spent the day drinking throughout DCon Saturday, this carried on at the DCon Afterparty but I wasn’t going to miss out on the Marsham Toy Hour DCon Bowling Party. Although I was rather drunk at the time of turning up to the bowling, I still somehow managed to get in on the bowling action. My infamous bowling glove, seen in the pic above & below, drew attention from our crowd of Gary Ham, Horrible Adorables, T-Hawks (thanks for the pics!), Sad Salesman & Jeremy Dale. Fair to say they think I’m a British idiot. Ha. If I recall though, the strikes came (even in my drunken state) and also Mr Gary Ham had much success wearing #theglove too. 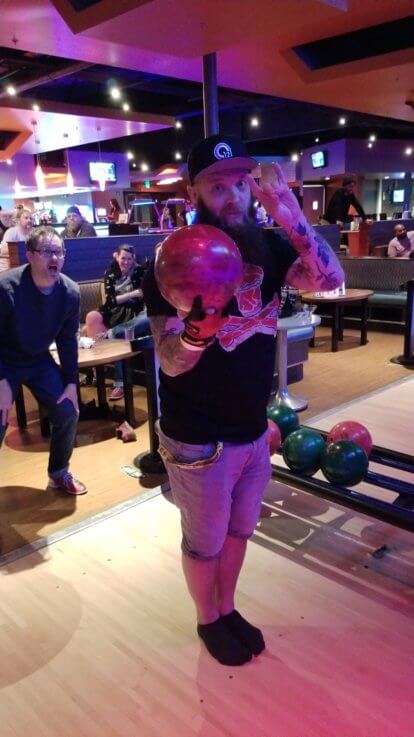 Anyways as the hours ticked by, and the drinks still flowed, my drunk ass started to falter. In my defence, I was drinking since noon and we’re at around 2am at this stage. So please forgive me. Ha.

Following on from my #10.1 highlight, my next highlight of 2017 would be the Marsham Toy Hour. The guys (Gary Ham & Theresa Hawkins) along with a host of awesome guests have put out a regular podcast. They take a positive outlook on the Designer Toy scene and each episode is super fun to listen to. Hope they continue to flourish in 2018! Well worth a listen if you’ve yet to check them out before. Hit their site HERE. You can also listen to my drunk ass on the Marsham Toy Hour by clicking this link HERE. You can follow Marsham Toy Hour on Facebook HERE. 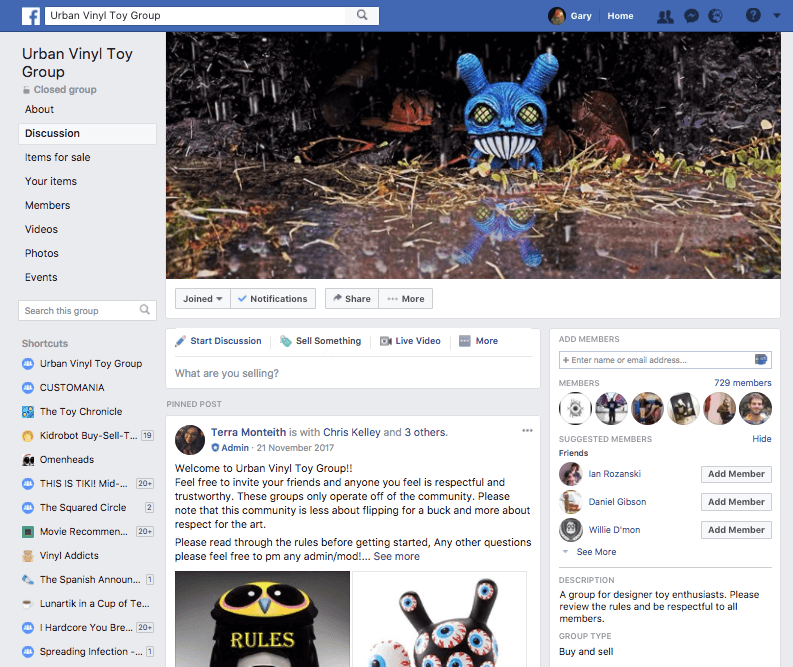 One of my favourite groups on Facebook is the new Urban Vinyl Waffle group. A place for Designer Toy collectors to enter Web Raffles (Waffles). Waffles are ways to win Designer Toys for a smaller amount of $$$ rather than spending huge amounts. A recent example was the rad 8inch Panda King Nightmare by woes which retailed for $300 at DesignerCon. Someone waffled this piece for $10 slots, there were 35 slots to fill. I paid $10 and entered the waffle. I picked my number and waited for the admins to run the Facebook Live stream to pick the winner via Random Number Generator. I won. So I took down the $300 piece for $10. Obviously, it’s not always winning waffles but I’ve taken down a few wins in the last month. Won a Sket One set of four Sketracha Kidrobot Dunnys and a Jermaine Rogers GID piece too.

You can find the Urban Vinyl Toy Group on Facebook HERE. Facebook doesn’t like the word Waffle, so they had to change the name of the group. It’s a super friendly group. The waffles are all great prices too. A lot are retail price or some have come in below too. It’s all run very smoothly by a team of great admin folks. Everyone will help you find your way, and if you have any questions. 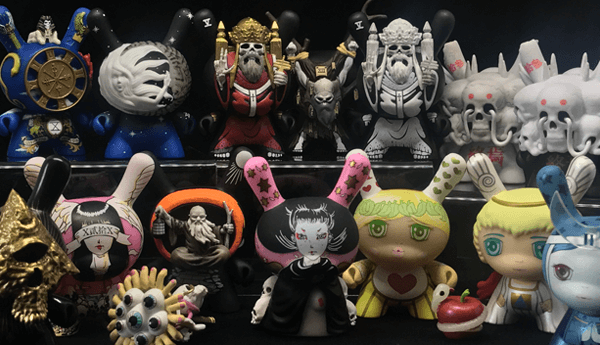 Kidrobot had a pretty good 2017 if we’re all honest with ourselves. We certainly think so. Some cracking releases throughout the year. Our favourite though, by a million miles, was the Arcane Divination Dunny Series, which was curated by J*RYU. Featuring artists JPK, Tokyo Jesus, Godmachine, Camilla d’Errico & J*RYU himself. A great cast of artists brought the demons! Excellent sculpts and paint job for all the series. Loved it. I reviewed the Arcane Divination Kidrobot Dunny series HERE earlier this year. 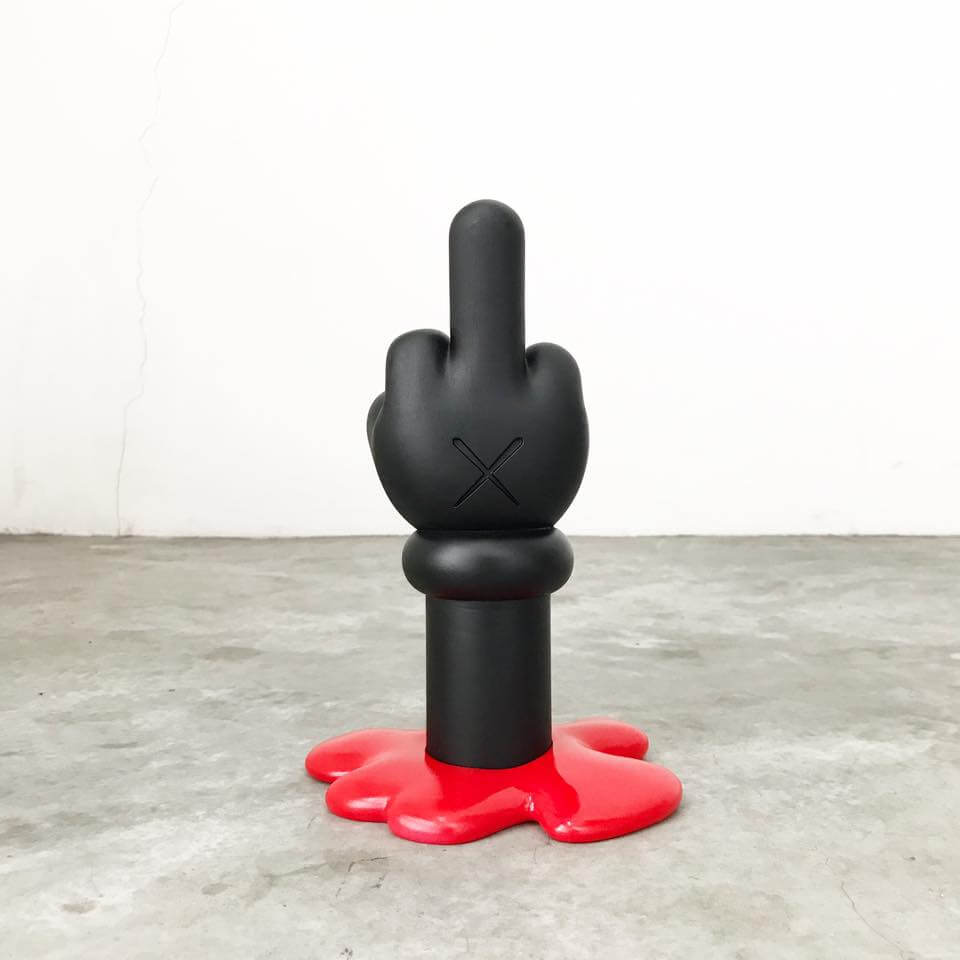 One way to stick it to the hypebeasts out there is to drive them wild with a simple finger in the air. Flabslab has done a fantastic job with their FUCKYOULAH releases this year. They started with the Pain edition (seen above) and followed it up with an all wood version with the Beech edition. Both have been received well in the Designer Toy community. Fuckyoulah is well sculpted, has a great finish and looks fucking great in my collection! No doubt about it!

If you’re looking to grab yourself a little Fuckyoulah, Flabslab has the Pain Fuckyoulah available for $250 HERE and the Fuckyoulah Beech flavour HERE for $220. 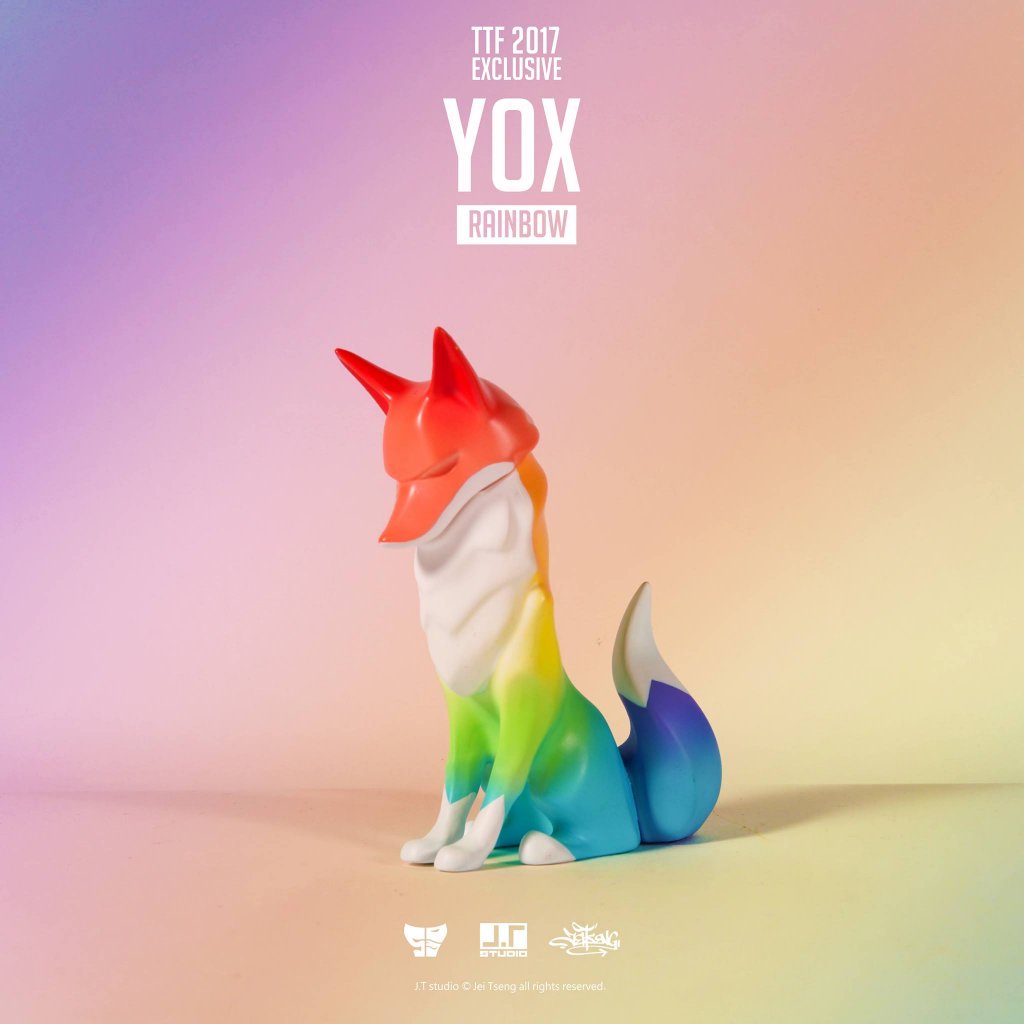 2017 has definitely been the year of the Yox! Taking the Designer Toy world by storm this summer, Yox by JT Studio! Pure simple love for Yox! Exquisite design. It’s near on perfect. We can’t find fault with Yox. Eight releases throughout 2017 have had our hearts beating that little bit faster. All amazing colourways. Yox also doesn’t disappoint when it comes to packaging neither. Each coming in a little drawstring bag and an awesome Yox shaped box too. All priced around $60-$70 each. 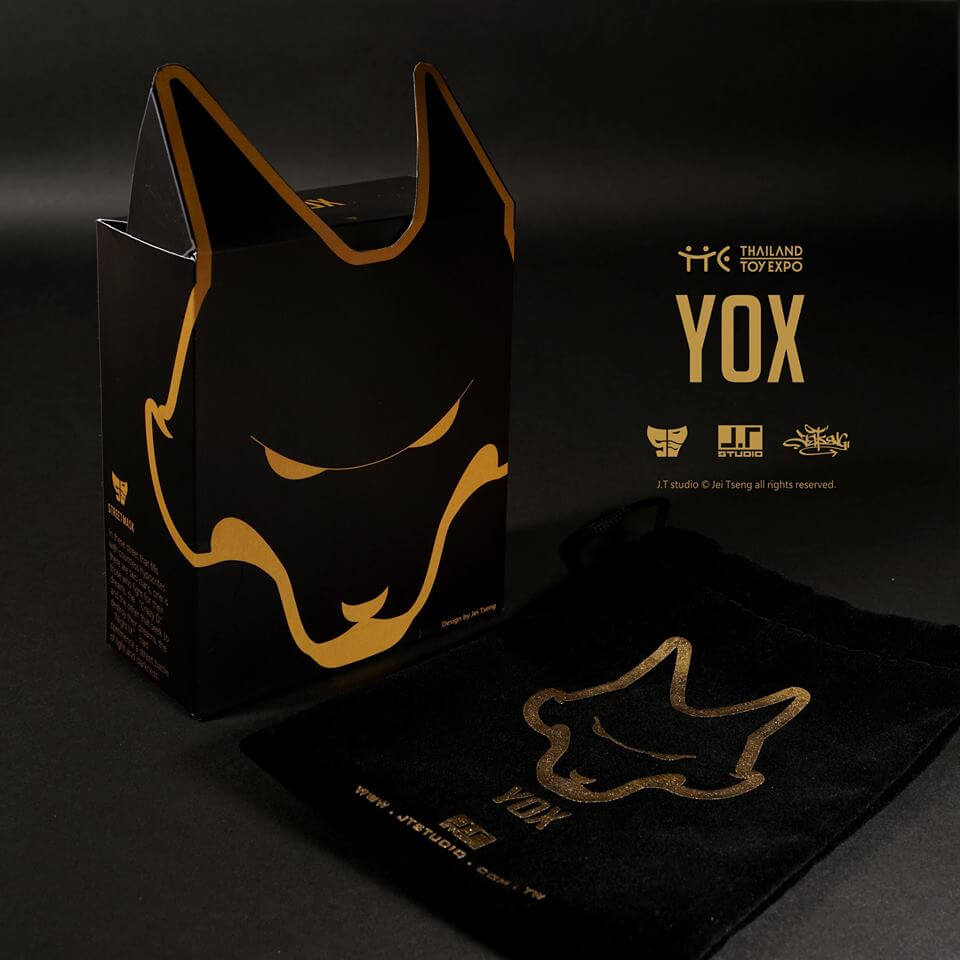 Yox is still available to purchase in different colourways on the JT Studio store HERE. I need to add the Yellow Yox and the Red Yox to my collection in the near future. Those were the first colourways to be produced. There was also a Black & Gold colourway that was released at Thailand Toy Expo, doubt I’ll ever get my hands on that colourway. 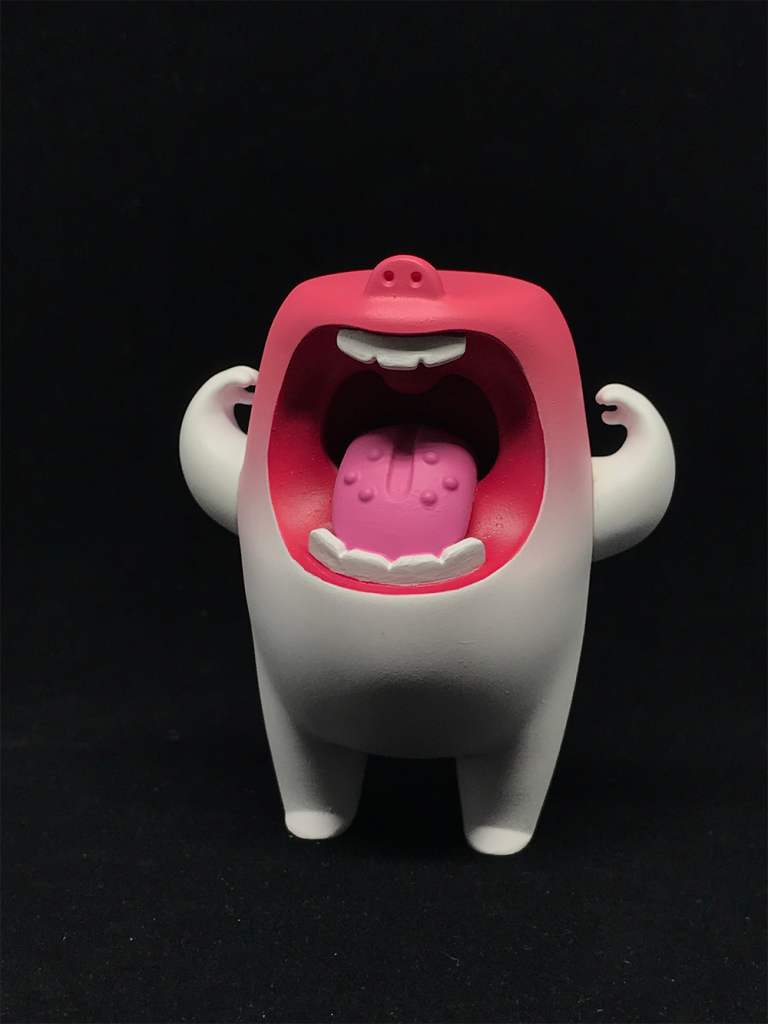 Mallow stole our hearts in 2017. In July 2017 we found Mallow and let him into our lives forever. Since July. we have seen the original Mallow get an official SELL OUT release, and then we’ve seen three other colourways drop too (Charcoal & Brown and Gingerbread). Standing at a little over 3inches tall, Mallow is exceptionally designed & sculpted by Mupa Toy. We can’t wait to see more of Mallow in 2018! Follow Mupa Toy on Facebook HERE.

I’m not a huge sofubi fan, I’ve said it before but there are exceptions. Metal Sloth is definitely one of those exceptions! Metal Sloth came into my life at Five Points Festival in May and I’ve never looked back since. Such a great concept. Since May, the guys at Xpanded Universe have brought Metal Sloth to the sofubi world with two releases at DesignerCon this past November, with future colourways planned for the new year. Keep your eyes peeled to The Toy Chronicle for future Metal Sloth news in 2018! 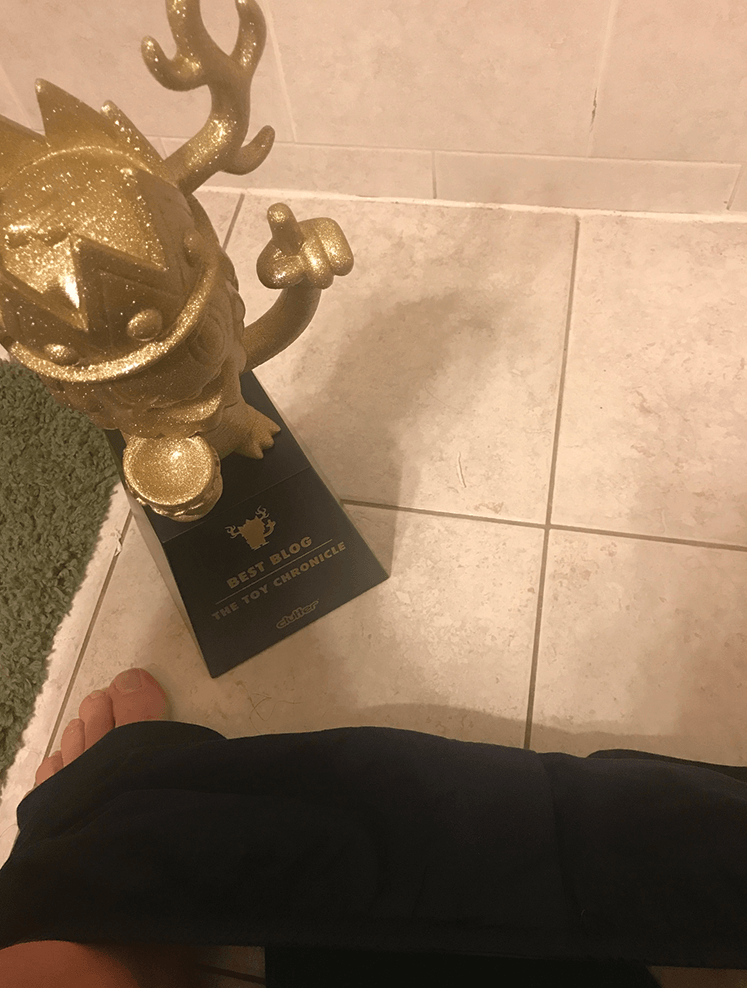 Following our first Designer Toy Awards win in 2015, TTC is back to No.1 again in 2017 with our second DTA Best Blog win! Muchas gracias to all those that voted for us this year. The Best Blog award is a toughie to win, as we’re going up against blogs that have been running a lot longer than us. Yet we are right up there with the best of them! It was a great honour to take down the DTA Best Blog award again. Being at the DTA ceremony to accept the award was also a great moment in 2017. Let’s take it down again in 2018! 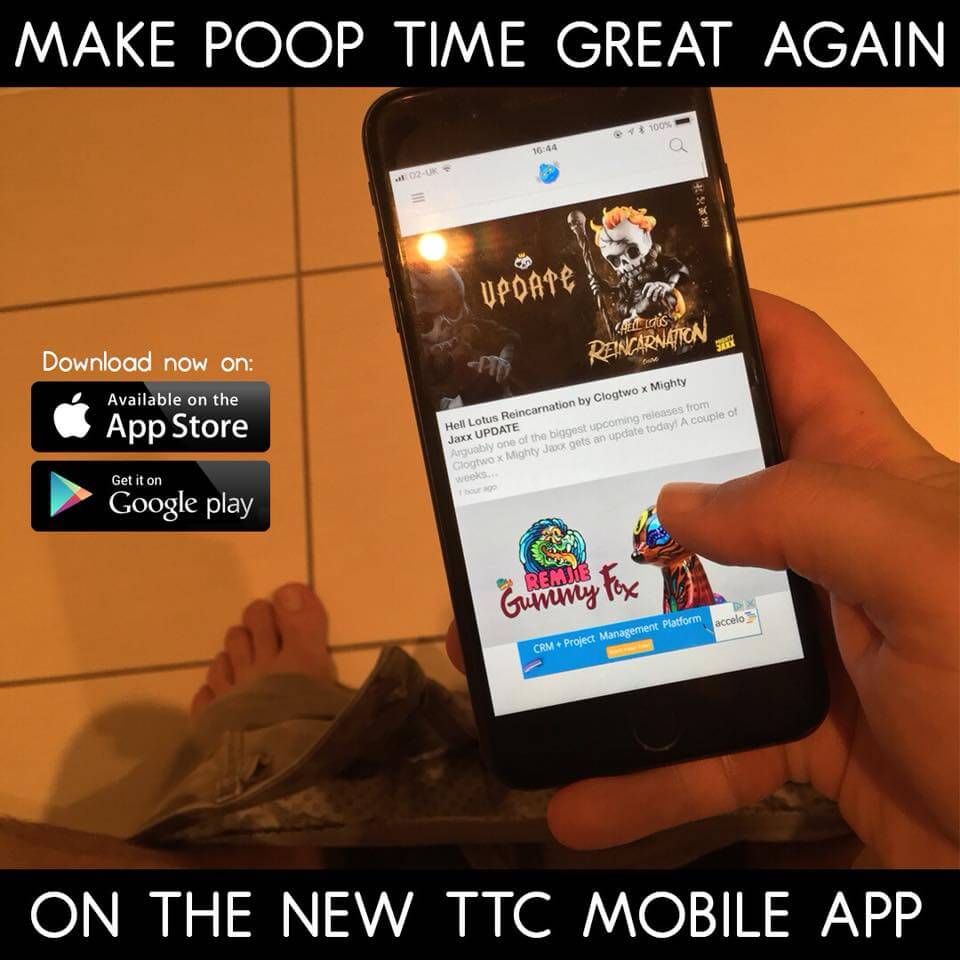 We wanted to change things up in 2017 and do something that no other Designer Toy Blog is doing. We didn’t decide to just share Facebook posts, cos that’s easy. Anyone can do that, right?!. Nope, we decided to do something awesome. We created our own TTC Mobile App. Available for BOTH the iPhone and Android smartphones. It’s a work in progress right now, but something we’ll work on in 2018 to make your Designer Toy new experience the best it can be.

You can download it on to your smartphones via the App Store or Google Play Store on the links below: 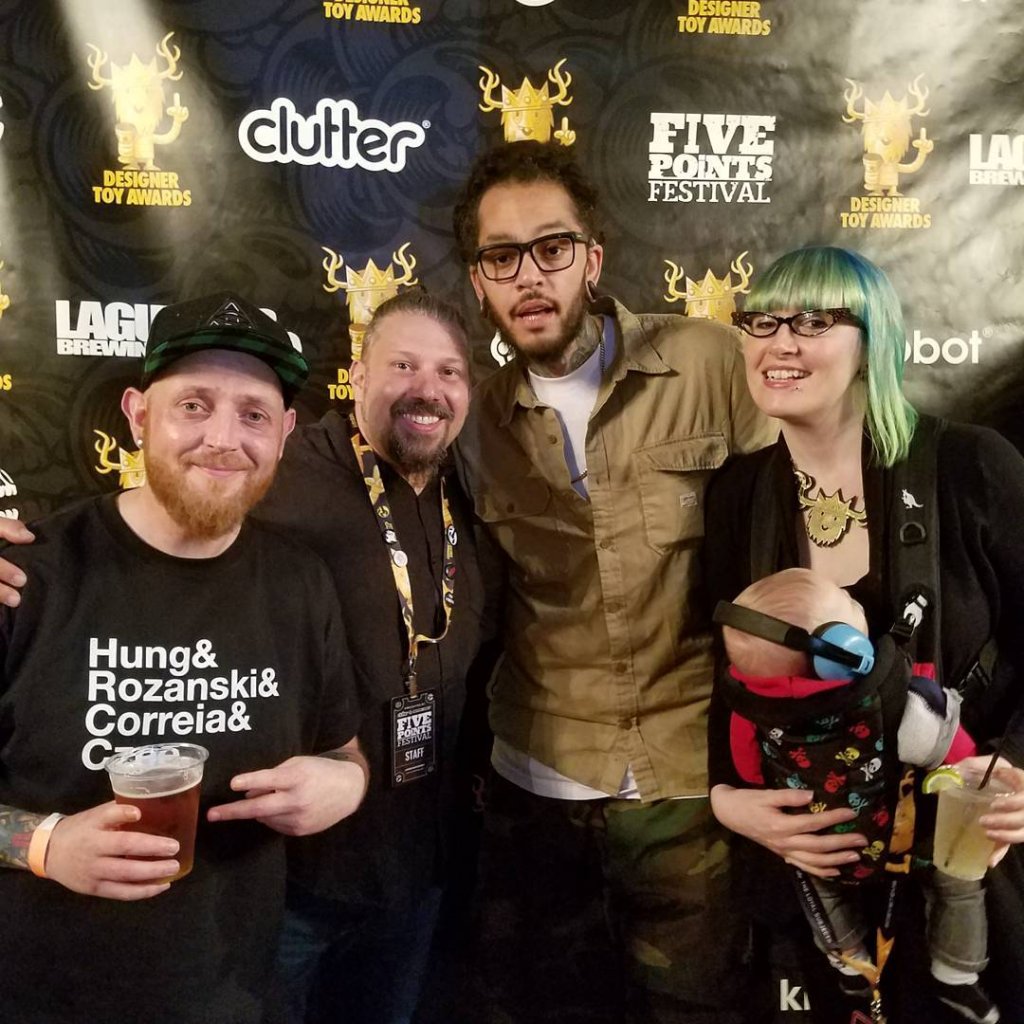 My #1 highlight of 2017, and it wasn’t an easy decision based on my Top 10ish highlights, but I think the guys at Clutter Magazine aka Clutter Gallery deserve the N0.1 spot for 2017 with the Five Points Festival they hosted in May! A brand new Designer Toy convention in Manhattan, NYC and the guys blew it out of the water. There was no messing around with these guys. You would forgive them for going small for their first year, but NOPE, they went big! MASSIVE even! It was a great two-day convention. Great location in Lower Manhattan. Not only did it have an awesome range of artists available, but they included craft beer & street food too within the confines of the convention. It just worked, really well! We can’t wait to go back in 2018!

So, there are my Top 10ish highlights from 2017! What are yours? Let us know what you really liked from 2017, we want to hear your thoughts. Perhaps there was something in 2017 that you disliked too? What were your favourite releases or your favourite artists of the year of twenty seventeen! What are you looking forward to in 2018?