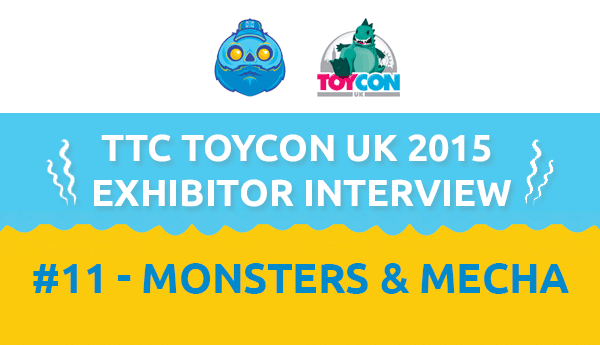 With only 17 days left to go until ToyCon UK, we figured we would bring you another Tuesday afternoon TCUK Exhibitor Interview! This time we speak with the duo behind Skelevex and Raar – DMS & Neese. Together they make up the Monsters & Mecha booth!

DMS: I’ve been making resin toys for a living for over six years, this is the only job I’ve ever had that I haven’t hated. I live in Cornwall with my long suffering wife, and plush creator, Neese.

Neese: Obviously, I live in Cornwall with Dan (DMS).  For me, making plush is a hobby.  I teach young children and also work with children up to the age of eleven. I’ve always had an interest in creative hobbies and have been making plush for about three and a half years.

How did you get into the Designer Toy scene?

DMS: I was working as a web designer for a mainstream toy company and came across the Dunny by Kidrobot when looking into toy materials. I’ve been into graffiti for about thirty years (yes, I’m that old), so once I saw some toy designs by graffiti artists I really got interested.

Neese: I started to get interested in some of the designer toys that Dan showed me, especially some of the plush.  I also saw an article about Felt Mistress in a magazine, which got me more interested and Dan kindly offered to buy me a sewing machine.

Neese: I’m not sure that it counts as a tool, but I quite often use my fabric samples as a starting point and for inspiration.

DMS: Depending on what I’m working on, the material can be completely different. I’d have to say pencil and paper though.

Neese: I like the shape of Munnys and have done a few customs using that platform.

DMS: Having my own collaborative platform with Alto, Skelevex will always be a favourite.

DMS: I’d love to see custom Skelevex by loads of artists, something there will hopefully be much more of in the future. I couldn’t pick just one artist.

Both: Buying a house! We’ve got permanent studios in and outside of the house now, for everything from computer based design to painting, to plush making and resin casting. Being settled is really positive and a huge boost in being creative and productive.

Neese: There will be three brand new colourways of Raar! Each will be limited to just five pieces, with companion Mumbles in the same fabric.

DMS: The launch of the new size (midi) Skelevex in various colourways, full size Skelevex  customs by some amazing artists and some resin silliness (One Inch Wonders) from my alter ego Captain Yampy. We’ll also be releasing a mini Skelevex Dead Presidents (TTC covered this HERE) as an experiment in the ‘pay what you want’ style of Radiohead’s In Rainbows album. That’s definitely going to be interesting!

We both also have other pieces that we hope to be bringing along.

Both: Everything, by everyone! ToyCon is our one chance a year to have an up close look at what everyone’s been creating. We love seeing all of it.

Both: There are so many great artists from around the world that we’d love to see in person, it’s impossible to pick!

You can find these guys on social media at the following links:

If you’re still sat on the fence and wondering whether or not to attend ToyCon UK 2015, well why not climb down from that fence, go buy your ticket HERE and come see us on April 25th for beard hugs and designer toy goodness! We promise you that this will be awesome!