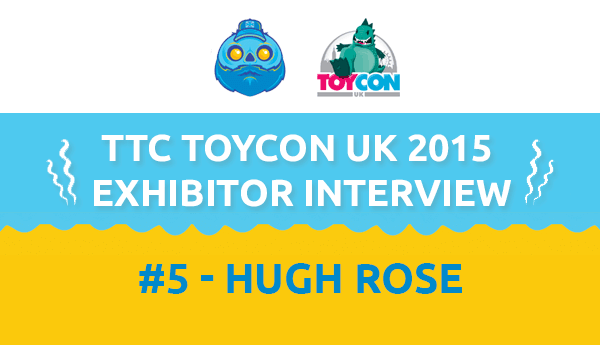 Another day draws to a close, which means we are ever closer to ToyConUK and thought we’d bring you another exhibitor interview. As we did with the Dok A interview earlier today, we are again going to re-introduce you with a veteran of the ToyConUK day, Hugh Rose. Hugh has been ever present at TCUK, making his third appearance on April 25th 2015. Hugh Rose’s booth is always a must see and we can’t wait to see what he brings this year.

I’m an artist living and working in Guernsey in the Channel Islands. I’ve been customizing for five years now and in the last two years have been creating my own toys from scratch.

I bought a Mini Munny in 2009 and drew on it with a POSCA. Something just clicked creatively when I did that. When I finished that piece, I went on some forums and realized that there was an amazing community of artists and collectors out there. Since then toys have been one of my main creative outlets. I have experimented with a huge amount of techniques and tools over the past year. I think the most useful tool is a mold, but I also love my Proxxon Micro Lathe.

It has always been the Munny.

My absolute dream collab would be with Alan Moore. That would be really interesting.

2014 was a year of learning for me, particularly on the technical side of things. I think Volpin Props has been a huge influence in terms of his skill and imagination as a maker.

Indeed I have! My new resin toy, including exclusive variants and all of that jazz. Watch my FB page for updates: https://www.facebook.com/hughrose84

There’s always so much to see and talk about. I always look forward to seeing Squink and Haus of Boz’s booth, as they always put up a great display. Map-Map also for the same reason. I also look forward to catching up with JPK and DMS as they have so much interesting stuff to say about toys. This year I’m going to try to meet some of the artists I didn’t get a chance to meet last year. This is the thing I love most about the event; that all the best UK toy artists are together in a room for a whole day. It’s really exciting.

I don’t have any rare or expensive figures, just Dunnys and Mini Figures. But I would probably save the Dunny 2010 Sneaky Raccoon, just because I won the full Dunny 2010 set in a custom contest, and that was my favourite from that series, so it has sentimental value to me. It sticks in my mind as being one of the toys that really inspired me early on, even though it is not particularly rare or valuable. Hugh can be found on Twitter, Instagram & Facebook! Go check him out! If you want to see what Hugh has on his ToyConUK booth this year, you will definitely need to buy yourself a ticket. If you’ve yet to buy one, why not? Go now. Go HERE!