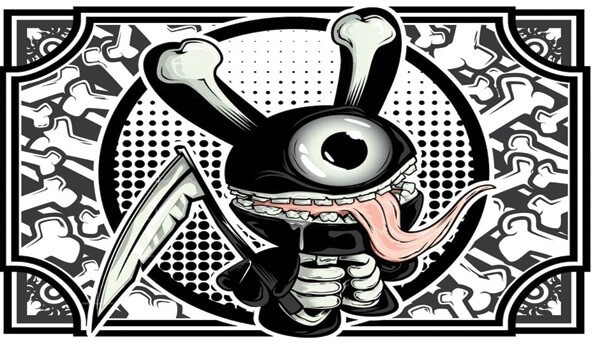 So…Introduce yourself, what’s you name (other than your artist/business name)?

Hello my name is Jamie Stubbs and i’m a gemini… 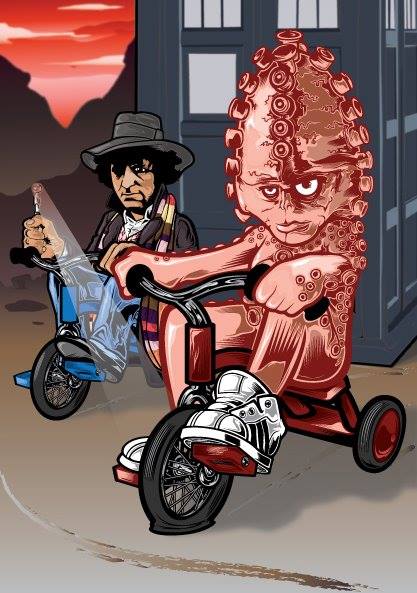 How did you get the artist name Mimic?

Well it really came from the fact that i’ve always been into graffiti, I had tags before but wanted something new. I chose mimic because I always used to do silly impressions when I was young and then when I was choosing a name I was trying out new artwork styles and mimicking my influences to create something new. 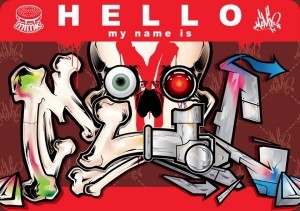 Are you an artist from the get go, or developed through time and being in the hobby?

I’ve created art from when I was young, listening to War of the Worlds and drawing what I thought where the aliens that were described. I then studied art through school to university. So it’s basically my life, a job and a hobby 🙂

I started to collect Spawn toys back in the 90s and through magazines and the web I started to notice new toys that were everything i’d wanted as a kid. At the start of 00s I saw that graff artists were beginning to release toys based on their work, so the first “designer” toy stuff I bought was because of that. The Seen “Spraycan Monster” and Bode’s “Cheech Wizard” are still 2 of my fave pieces 🙂

All sorts, other artists, movies, music, comics and everyday pop culture. That’s part of my name as I take ideas from all around me and reproduce them and combine them in my own style. I like to twist ideas on pop culture or add to them. eg my Deadventure Time piece was created from my love of Adventure Time and Zombies and of course that classic ‘baking bacon pancakes’ tune lol 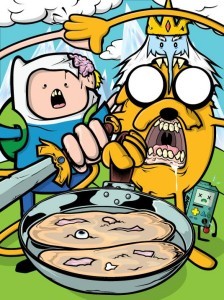 Who has been your biggest influence?

That’s hard to refine. I have so many influences from graff (Seen, 123Klan, Flying Fortress) to illustration/design (Phunk Studios, Brandt Peters) A lot of my early toy design influences came from TADO.

When you sit to create, can you describe your ideal setting? For example: do you have music playing, if so what kind or artist, what kind of drink do you have next to you and what are the tools that are a must for you to have on your desk?

I tend to sit at my desk a lot in front of my tv which doubles as a monitor, it’s large enough that I can watch movies/tv shows while I work. Most of the work I do is in Illustrator and Photoshop but I usually have a sketch book and pencils nearby. I love to watch movies/tv shows while I work, I think my mind likes the chaos of not concentrating on one thing. I also listen to music from time to time, i love to sing along to my fave tunes lol As for styles and genres, well, movies are usually horror or sci-fi (not limited to that but usually), music depends on my mood really, sometimes Metal/Thrash/Industrial/Rock (Mastodon, Nine Inch Nails, Soundgarden) or Electronica (Global Goon, Luke Vibert, µ-ziq, Plaid) or Hip Hop (MF Doom, Old School stuff) and then sometimes artists like The Smiths or The Cure, a throw back to my college days. Do you have a favourite piece of art, that you created, that you cannot part with?

No not that I can think of, I’m far too critical of my own work and once it’s done i’m already finding fault and want to move onto the next work.

What is the story behind the design for your Ye Olde English Kidrobot Dunny?

Well a long time ago… not a big story really it’s just a creation featuring a character based on my love of skeletons and eyes. The bit that has more narrative are the words. I used them to create what were meant to look kinda like tattoos, the words “You” “Never” “Know” is a phrase I used to use when I started out on forums, before I had my first toy release. I sent my designs to Raymond at Toy2r and when asked about them on the forums used to say “you never know” which became my signature. Eventually I did know as Raymond said yes and my I_Monster Qee was released as part of Qee Series 5B. From then on it just stuck and this is a nod to that. 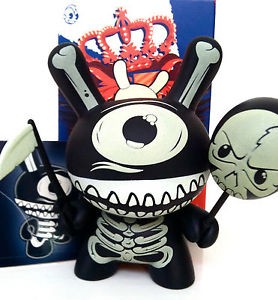 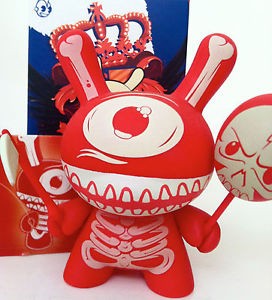 Is there anything that you are working on that you can tell us about?

I’ve been really slow as of latey, my design work, posters, tees etc is a constant thing but I can’t tell you about those. My very rare custom work is still going, I’m working on a Munny for an Italian friend, then a bit of work involving a certain Doom mask and also working on a funny little head thing that you may have seen, Victor Brass or some such 😉  As I say my custom work is long winded. Want to get back into painting soon too. 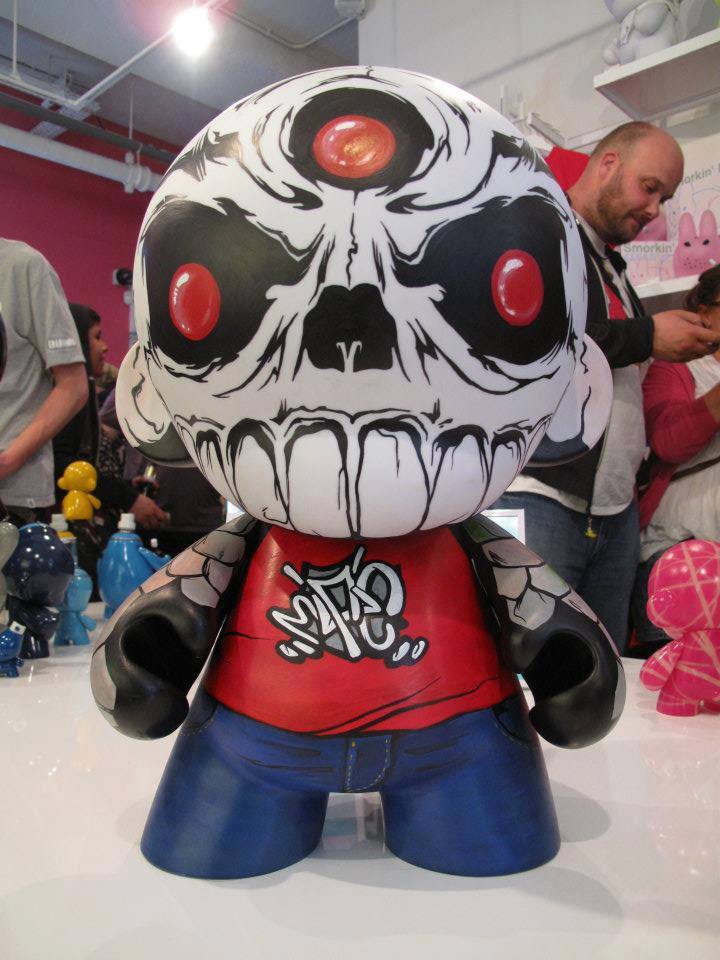 Ron English, the collabs of Brandt Peters/Ferg, ViseOne, 3A. More old school creators are H8Graphix, Elphonso Lam, Toyko Guns none of whom seem to do much toy work now 🙁

Well I’m not really that involved in it any more, I still collect and have an interest but projects seem to dry up after the release of the KR Dunny. I feel it went too commercial too quick and left a lot of decent artists wondering what to do. I prefer the more underground scene but I know that realistically you need to make money to keep most things going. The custom scene seems to be producing a large amount of amazing talent and the smaller resin creators are making toys that make the commercial stuff look lame. There’s still a good community out there and I would love to have my own toy out some day. 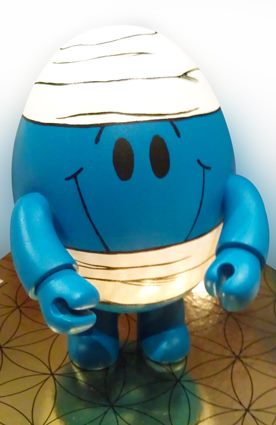 Have you got any shows coming up within the next year?

Nope, not at the moment, the year is still young and this interview might refresh peoples memories of me lol I’m hoping to go to ToyConUK this year but as a visitor not an artist.

Ok lets see, I think it depends where you want to be, commercial artist or underground. I started in the biz by asking people in the biz to gimme a chance but that isn’t so easy now. Some people get noticed by creating amazing customs and the toy companies will ask them to jump on board a project. Really my advise is, hone your skills, create a style that you’re happy with and stick at it. The community will usually help you along the way, but you need to make your mark yourself. 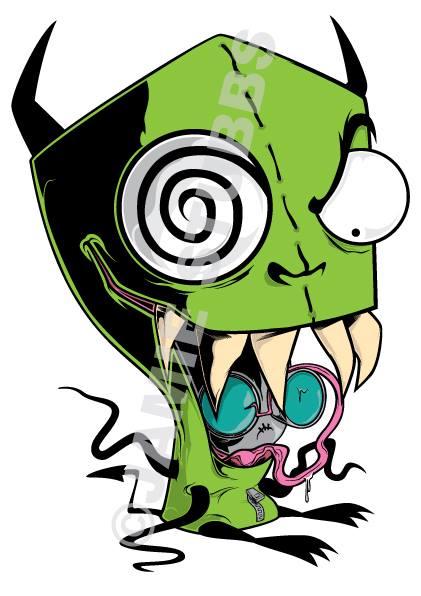 Thank you my man.