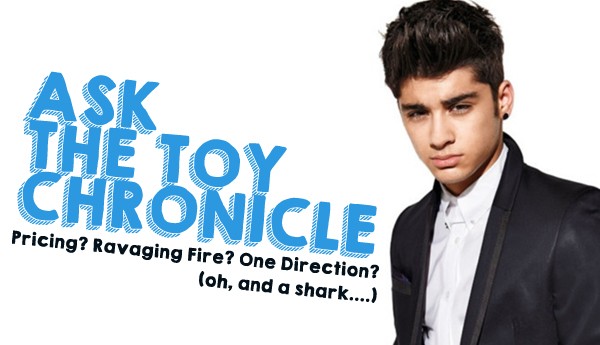 There were some awesome questions this week in the Ask The Toy Chronicle, and even better answers from our all-star panel! Judge for yourself below…

Ace questions? Right?! Well, prepare yourself for the answers. There are some doozies!

Ian from Derbyshire & Barry from Cheshire both asked similar questions this week: I’m considering releasing a series of custom dunnys, but I’m not sure on how to price them accordingly. I want them to sell but want to undersell them. so my question – When it comes to the pricing of a custom, what aspects do you take in to consideration before offering a price?

Dan DMS from Monsters & Mecha: Pricing is always tricky, I know a lot of artists hate it and I do too! For me it depends on each individual piece. The cost of materials and amount of time put into it are the most important and when you’re starting out, it’s best to keep your prices as reasonable as you can while not selling yourself short.

James from Robotic Industries: I always price to sell as there is no point doing all that work for the piece to sit on your shelves gathering dust. The price probably doesn’t reflect the hours I put in but for me the pleasure is in creating the piece not the money made at the end. If the money is the only factor you’re interested in then maybe you should move into the banking sector.

Neese Plush, the beautiful half of Monsters & Mecha: To work out pricing I think about the cost of the materials I’m using and how much time it’s going to take me.

Jonjo Glynn of ToyConUK fame: Price them to sell, especially if you’re starting out. It’s highly unlikely you’ll ever be able to price them where they represent value for the amount of time you’re putting in. As James said it’s far better that they sell. Get people hooked on your work and then as your become more widely known and in greater demand you can increase the price. I think a 3″ Dunny from a new artist should £50 as an absolute maximum, unless you’ve changed the sculpture of it hugely or built something for it.

Jon-Paul of Kaiser: You have to consider the time that you’ve taken to do the work, take into account the cost of materials and the figure and work out a rough hourly rate. Like Jonjo said, it’s got to be priced to sell so try and find a balance between what you’ve calculated you should get and what price you think it could sell for.

Mike Strick: I find it easiest to think before I start of a price people might pay and work backwards form that. That way I can budget my materials and time to suit, and if I misjudge I can either choose to take a hit or risk bumping up the price a bit.

Sam from Pontypandy asked: There is a raging fire in your apartment, you can only save one item from your toy collection. what piece do you save?

Anna from Sneaky Raccoon: I would probably save my stuffed Totoro plush. He seems like good luck and is a happy chappy.

Holly from A Little Stranger: I’d save my Blythe Dolls, after I’d saved my guinea pigs of course!

Jayne from Collect & Display: If there was a raging fire I would save lion custom that Lee had made for my birthday. (editor note: we covered this beautiful piece here if you want more information) Mike Strick: Luckily, several of my favourite pieces are on my desk at work, where they’ll be safe from the inferno. I think I’d probably grab my 1:6 ThreeA Mongrol but I’d stuff the totally non-designer Monev the Gale into a large pocket too, as it’s probably one of the greatest action figures ever made. JPK: If it’s easy to grab in the way out, my Giant Snorse.

Jonjo Glynn: My Lego VW Campervan, took me ages to build it and I think it’s one of the best sets Lego have ever done. Neese Plush: I’d have to save my Raar prototype!

Terry from Newcastle asked: Do you like free range when asked to do a custom or do you prefer clear direction?

A Little Stranger: I like a little bit of direction, like a colour or a character/animal type. That gets my imagination running straight away with lots of ideas for the custom. I then move of to doing a couple of quick sketches to make sure myself and the client are on the same page before starting work on the custom.

Mike Strick: Unless it’s a new platform, I prefer a theme. Even a few words are enough to spark inspiration; better that than sitting hoping for an idea to come.

Neese Plush: I have commissions where I’ve had both extremes. some very specific requests, which I’ve done my best to meet, sending photos as I’m working and changing what I’m doing, incorporating suggestions as I go. Other times I’ve just been told a color idea and work from there. I don’t really have a preference about which I like best, both are challenging in different ways.

Sneaky Raccoon: My clients always give me free range to do whatever I want to do. They like the surprise, however I do ask them if they have favourite colours or a favourite animal.

JPK: Personally I prefer free range, I’m happy if people have a vague theme or character in mind as all these options allow me to be creative and for my imagination to have a chance to play around the the ideas and different takes on a theme. I’ve had a couple of customs with very specific instructions and it never quite works out as well.

Robotic Industries: It’s nice to have some direction, even if it’s something as vague as a colour or a genre.

Dan DMS: Personally, I love it when someone commissions me and gives me complete free rein over the piece. I do prefer there to be a rough idea of the style they like though, even if it’s as vague as a robot or monster etc.

Gareth from Slough asked: Will there ever be a boy born that can swim faster than a shark?

Mike Strick: You don’t need to be able to swim faster than a shark, just faster than the slowest person in the water.

JPK: Yes, there already has; depending on the kind of shark. The human record for swimming speed is just over 5.1 mph, whereas the Greenland Shark is a slow mover, clocking a top speed of 1.7 mph. So a lot of people could probably swim faster than that type of shark. If we’re talking something as fast as a Mako, no way. Even with a million years of evolution, by which time you could no longer regard that creature as being human.

Jonjo Glynn: Damn skippy, I can swim faster than a shark.

Robotic Industries: It seems unlikely as sharks have had millions of years to evolve into the perfect hydrodynamic shape. Although Basking Sharks are slow movers so we could swim faster than them now (having said that little is known about them and they have been known to leap out of the water during courtship rituals indicating quite a turn of speed).

Dan DMS: Legend has it that there already might be. Rumoured to have been discovered off the Sea of Compatible Ink by Captain Yampy, Long Ron McTurbot can reportedly out swim sharks, whales and Duncan Goodhew. He is also allegedly a hyperspeed yeast thief.

Holly Glynn: I think I met him one time, he has really big feet.

Many thanks to all who sent in questions and to our awesome all-star panel for their insightful answers!!

If you want to ask a question, please use the form below and don’t forget to leave your name & location for a shoutout!