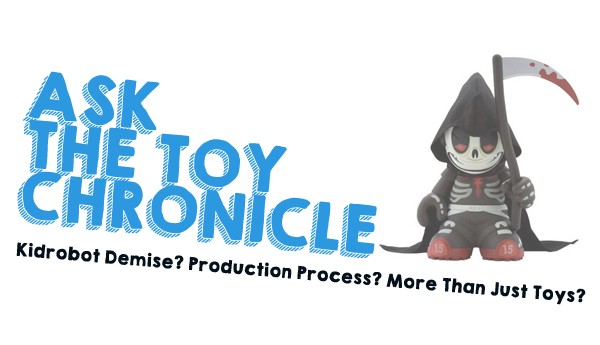 After a weeks break, due to Question Guru sunning himself in Brazil, we return to the Ask The Toy Chronicle segment. Where you the TTC fans get to ask your Designer Toy related questions to our stellar cast of artists, contributors & collectors! This week we have four great questions, with some cracking answers from the likes of Sneaky Raccoon, A Little Stranger, JPK and DMS. So lets crack on with this weeks topics:

– What do you think about Kidrobot closing stores like there’s no tomorrow? Are they still relevant in the toy scene or have they had their day?
– How do you explain to people who don’t understand the toy art scene that there’s more to it than just toys?
– When you create something be it art , or toy… Is it with the thought that the general public will like it and therefore buy it , or is it more that it’s just something you like personally and hope the public will embrace it.
– My question is to those on the panel that have had a production piece released. what is the process that you have had to follow and what are the timeframes from first contact to release?

First up we have a question from MAtt in Kent (possibly related to TTC Matt. Maybe). He asks: What do you think about Kidrobot closing stores like there’s no tomorrow? Are they still relevant in the toy scene or have they had their day?

Jon Paul Kaiser had this to say: I’m very hopeful for them, there’s clearly been a period of significant change for them over the last few years and they’re still evolving. They’re definitely still relevant; the Dunnys series are still immensely popular, Huck Gee’s Dunnys sell out in seconds, the commissions I get are still mostly KR platforms and the higher end figures (like the KR Black range) are very high quality figures. Taking a step back it’s reasonably clear to see the advantage of closing their bricks & mortar stores to let other stores stock their figures, and perhaps have pop-up stores for big releases. There’s not really a company around at the moment who could fill the hole should KR disappear, but perhaps a large competitor is needed to revitalise the market, bring in new fans and satisfy the older ones too.

James from Robotic Industries answered: I think it’s a real shame that the Kidrobot stores are closing as the one in London was a great place to shop and hang out. I think the art toy market has moved on with more artists becoming designer/manufactures rather than waiting for a big company to take on one of their designs. Also with direct marketing through the likes of Instagram and Twitter and direct sales through the likes of big cartel and etsy you don’t really need to have your pieces in stores like kidrobot. That being said the Munny will always have a place in my heart.

Jayne from Collect & Display added: Kidrobot was such a massive thing to us when we first started out, as we literally only knew of Kidrobot for designer toys. On a business level, Kidrobot’s UK distribution is very poor at present and our customers have had to wait much longer for an order than originally planned but it’s totally out of our control. Kidrobot were such a leading brand for us, the reason for our C&D dream but now; other than the dunny releases, it doesn’t feel like it would be much of a loss to us if they did close altogether. There are so many other huge names out there; artists, suppliers and manufactures to keep the toy scene alive. We don’t ever worry that it will fade – There’s too many of us to let it!

Jonjo from ToyConUK answered: I think it’s part of an inevitable cycle. You can’t deny that Kidrobot has had a massive influence in the scene overall, they’re most people’s gateway to designer toys and they took something that was incredibly niche and opened it to wider audience. As they grew and grew and became a large scale business they have to make business decisions, brick and mortar stores are in decline across all industries and it’s not surprising that this aspect of KR has waned. I think they will always have a relevance because of what they have done but they move away from the art toy side of the scene and into the collectible/licensed space.

Mike Strick says: The Kidrobot closures probably say more about the state of retail as a whole than their position in the vinyl scene. The company are still in a good position to bring vinyl toys to the masses but the lack of stores is a loss to us all as they were some of the few places where the general public was exposed to toys displayed as art.

We have had an anonymous question (Editor: please don’t forget to leave your name & location): How do you explain to people who don’t understand the toy art scene that there’s more to it than just toys?

Jayne answered: It’s a difficult subject to explain to someone alien to it all. Our answer is: We sell designer collectable art toys. Depending on their production runs, depends on their rarity and sometimes their value.

Holly from A Little Stranger added:  I just keep it simple and say I run my own small toy brand, and describe the designer toy scene as small companies designing and producing their own collectible toys for adults. Sometimes that gets misinterpreted as ‘adult toys’ at which point I go red and change the subject.

JPK answered: Well, to me it’s a combination of a variety of art scenes, from street art & graffiti to pop art, illustrative and character design through to motorcycle and hot-rod graphics.

James answered: I explain it as 3D illustration. I find this a good analogy as you can have a one off illustration = a one off custom toy or a run of hand pulled screen prints = a limited run of vinyl pieces.

Jonjo answered: I’m with James on the first question. Toys are 3D art prints. They’re an expression of the artist who designed just like a sketch or painting. It’s pop sculpture.

Mike had this to say: I think most people begin to understand as soon as you show them pictures of toy customisers’ creations. I never feel the need to justify toys. In fact I particularly dislike attempts to disguise toys as something else, for example by calling action figures ‘figurines’ or ‘statuettes’.

Another anonymous, yet good, question: When you create something be it art , or toy… Is it with the thought that the general public will like it and therefore buy it , or is it more that it’s just something you like personally and hope the public will embrace it.

JPK answered: It depends, sometimes it’s an idea or a pun, other times it’s part of a story world I’ve concocted for myself. Most of the time if it’s a specific genre or character I’m creating it’s by request for a commission. I personally prefer to create my own characters and worlds as rehashing somebody else’s IP is just treading water. You see a lot of artists trying to establish themselves in this scene by taking well-loved figures and iconography and combining them to make something purely to sell on the strength of people loving the subject matter or original toys, and not even try to put their own mark or spin on it.

James responded: I always create for myself and if anyone else likes it then that’s a bonus. As this is not my full time job I use my spare time doing it. I don’t think I’d enjoy it as much if I was always working to please others. Let’s face it your artwork is not going to appeal to everyone so you might as well enjoy it yourself.

Anna from Sneaky Raccoon explained: I don’t make artwork or commissions for anyone else’s tastes but my own. I have my own style and clients want me to do whatever I want to do in the way that I would do it. At the end of the day, you can’t please everyone else, so you might as well enjoy what you do as it always produces the best work.

Holly added: I keep working at a design until it’s something I really like and would want to buy for myself. I feel that if I like it, then some,one else will too!

Dan DMS was quick to add: I agree so far on the matter of why you create what you create. This is what I do for a living and over the last five + years and I’ve found that the best test is this. If what you’re creating excites you, that will come across to other people. Nothing is going to be everyone’s cup of tea, so don’t even worry about that! I’m having the most fun creating what is purely for me, with the new Captain Yampy freaktures!

Mike responded: I think if you’re creating something purely for commercial appeal, it will come out lacking. Art is at its best when there is a passion behind it that can only come from your own desire to create. It’s a great feeling when people actually do want to buy a piece where you haven’t compromised.

Finally we have a question from Bob in Holyhead. Bob asked: My question is to those on the panel that have had a production piece released. what is the process that you have had to follow and what are the timeframes from first contact to release?

Holly answered: the process for turning a toy idea into a tangible product is typically: design, prototyping, tooling and then production. As for time frames, there’s 164647373647 things that can effect any stage of getting a toy to production. Clear communication, realistic expectations and patience are key to a successful product launch.

Jonjo explained: As a producer of toys, I can say the time frames are fluid and there’s a million things that can lead to delays. Bear with the company you’re working with and as with almost everything communication is key!

James responded: As someone who’s produced pieces as part of RAJE toys I’d say be prepared for things to take ages. You have to keep so many balls in the air (artists, factory’s, shippers, retailers) that your time just seems to vanish, especially if you’re a small company.

JPK added finally: With production toys it varies wildly from company to company. Some have very rigid deadlines and very involved design templates, others are much more flexible. The thing that unites all of them generally is the excellent communication, from Kidrobot ant Toy2R to TAG and Pobber Toys.

Thanks again to everyone who sent in their questions! A massive thanks to the guys who responded. If you would like to ask a question, then please feel free to see the box to submit below. Don’t forget to leave your name & location. Anonymous is taking all the credit. You guys deserve the credit!