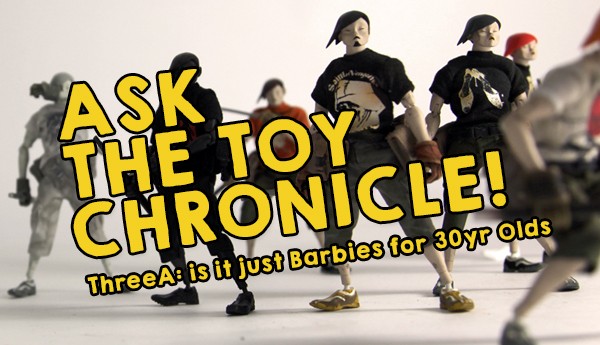 Got a great selection of questions this week. Questions which have been posed to our All-star Panel of artists, collectors & contributors to the UK Designer Toy Scene! Don’t forget if you would like to raise a question, please include your name so we can give you a shout out.

Anonymous asked: “Do you think social media plays a big part in sales?”

Jonjo Glynn (@jonjoglynn) of ToyConUK fame: I think social media plays a huge role in exposure and that is bound to have an effect on sales. Having a great social media presence won’t help you sell bad product, but the more people that see you work the better. Social media has been empowering to independent artists across the arts in general.

Jon-Paul Kaiser (@jonpaulkaiser) of JPK fame: Absolutely! It instantly links you with a whole world of potential viewers and especially in this particular art scene it exposes art to people who 10-20 years ago may never have been exposed to art outside of school. Social media also allows instant communication, feedback and relationship building. I can’t imagine being able to do this career independently twenty years ago in the way I can do now.

Mike Strick (@mikestrick) of Mike Strick fame: Social Media has made reaching your audience much easier. If your teaser images are interesting enough they will spread organically giving you the kind of exposure that would have cost a fortune in advertising before the digital age. Social Networking has helped turn what was quite a niche interest into a global community.

James Freckingham (@jimfreck) of Robotic Industries fame: Social media is a massive part of sales, you could be making the most beautiful, creative pieces in the world but if no one knows what you’re doing then you’re not going to sell a single piece.

Jayne Goddard (@collect_display) of Collect & Display fame: Social media is everything for us! As soon as we post something on the social media sites we have a flood of customers all at once. It’s crazy!

Holly Glynn (@alittlestranger) of A Little Stranger fame: Absolutely! It’s such a great way to connect with fans and make friends through mutual interests. I do most of my sales as timed releases and find social media is great for giving people the heads up that a new item is for sale. Marvin from London asked: “You’ve purchased a new toy – keep it in the box or take it out?”

Anna Mullin (@sneakyraccoon) of Sneaky Raccoon fame: If the new toy is fiddly and difficult to dust — keep it in the box! If not, toys are supposed to be enjoyed — mine are all over the house!

Jayne Goddard: The boxes for my toys are too big and much bigger than the actual piece so I always take mine out.

Jonjo Glynn: Take it out, the clue is in the name, its a toy, play with it. For me the only reason to have things in the bag is to increase value, and if you only want to increase value then perhaps you don’t love it as much as you think.

JPK: Take it out. You have to see it, feel it and see it on it’s own to appreciate it. I’ve only seen one box that would justify keeping the figure in it and that’s Kii Arens’ La-La figure, the box acts like a lightbox and scenery. Mike Strick: Toys are meant to be played with. Set them free! That said, good packaging design is also worth displaying.

Holly Glynn: Take it out, toys are meant to be enjoyed and played with! Also, If they stay in their packaging how would they get up to mischief at night when he humans go to bed?

James Freckingham: Depends on the toy, with Sucklord pieces the packaging is part of the artwork and Star Wars figures look nice displayed still on their card backs but most of the time I’d say get the toy out. That way you can appreciate the sculpting/painting/pose ability more and hopefully enjoy it more! Lucas from Leeds asked: “I’m looking for a new film to watch, what’s your favourite film and why?”

Mike Strick: So many great films. Favourites depend on what mood I’m in but Blade Runner, Alien, From Dusk til Dawn, American Werewolf in London and The Thing would all be in there. But you asked for something new, and I assume you’ve seen all of those so some that seem to slip under people’s radar are Near Dark, Cube, The Prestige.

Jonjo Glynn: Ever? Fucking hell that’s hard. I love old 80s movies I grew up with as a kid. Karate Kid, BTTF, The Wizard, D.A.R.Y.L., Flight of the Navigator. They don’t make them like that any more. I like tons of stuff, don’t think I could give one favourite.

James Freckingham: I’m a massive fan of old Sci-Fi films (50’s/60’s/70’s and of course the 80’s). There is always something interesting to see on screen with these gems even if the story and dialogue might be a little creaky. But My favourite film of all time is The Night Of The Hunter. A great dark film with amazing photography and a great performance from Robert Mitchum.

Holly Glynn: Labyrinth. Why? Duh, because Jareth is the dreamiest goblin king ever!

Jayne Goddard: The Lego Movie, ATM! It’s amazing! So clever above all and a great film all round! My all time favourite film is Man on Fire. It’s packed full of everything you want in a good movie. It’s absolutely awesome!

Jessica from Southend asked: “If there was a toy manufacture in the UK but more expensive but better quality would you use them?”

Anna Mullin: If there were an eco-friendly toy manufacturer in the UK I would definitely consider using them. I don’t like to work with vinyl or resin because they aren’t the nicest of products to deal with or for the environment either. I’d love for there to be a sustainable wooden toy manufacturer as well in the UK, keeping it British and local.

Jonjo Glynn: That’s a tricky question. How much more expensive. They do exist but it’s usually prohibitively expensive to use them. If we could have little Sofubi makers like Japan, I’d be on it on a second.

Holly Glynn: Depends in the product, but for small scale stuff almost always yes. Myself and a small team manufacture Cavey in my studio just outside of London. I love working this way because quality control is so high and I can ensure every Cavey is perfect, and has that handmade individual touch – each one will have a slightly different smile, or slightly different ear placement due to the way we make them. This is very deliberate so they’re not carbon copies of each other, each has their own personality. Where possible I source all of Caveys extras in the UK Too- the enamel badges, the little woven label on each one. With that economy the way it is I think it’s important to support UK businesses.

James Freckingham: I’d love to work with a uk manufacturer as the language barrier can sometimes be a problem as well as the shipping/import costs of getting pieces produced in the far east can be massive.

JPK: I think Jonjo nails it with his answer, it’s something I’d definitely be interested in as it would mean I could have more input in the development and production process and it would be great to actually visit and see the production happening.

Matt from Kent asked: “ThreeA…. Is it just Barbie Dolls for 30 year old guys in their mums basement?”

Jonjo Glynn: It’s defnitely dolls, but there’s nothing wrong with that. My experience of ThreeA collectors has been positive, but I have had limited exposure to them as a whole.

JPK: It’s another strand of figure/toy collecting that just happens to attract obsessive fans. Ashley Wood has got a great strategy with the storylines he’s developed and the small teased expansions you get with each release, to coax you further and further into his storyworld. The designs are excellent, the figures are often of good quality (though more and more that seems not to be the case) and there’s the excellent visuals and paintings to support the brand.

Mike Strick: ThreeA is probably not for everyone but the collectors I know fit in a very wide age range. Their products are occasionally hit and miss but for the most part genuinely achieve the goal of being art in toy form. Like McFarlane a few years ago, and alongside companies like Hot Toys, they’re raised the bar and customer expectations, forcing other companies to up their own game or be left behind.

James Freckingham: I’ve got quite a few 3A pieces but I tend to stick with the robots (I do like a good robot) and then the smaller 1/12th ones (as I’m not made of money). I think toy collecting is horses for courses, I’ve never been that interested in Doktor A’s stuff. I appreciate the quality and design but they just don’t excite me, you can’t like everything!

Holly Glynn: I do, but what’s wrong with that? I love barbie! I am a dolly person myself (Blythe and Japanese BJD’s) so I totally share the fascination with the tiny accessories, clothes, possibility. I love what threeA is doing.

So that wraps up another set of Q&A session. Hope you enjoyed it. If you want to ask your own question, please do so below. Don’t forget to leave your name & location so we can give you a shout out!