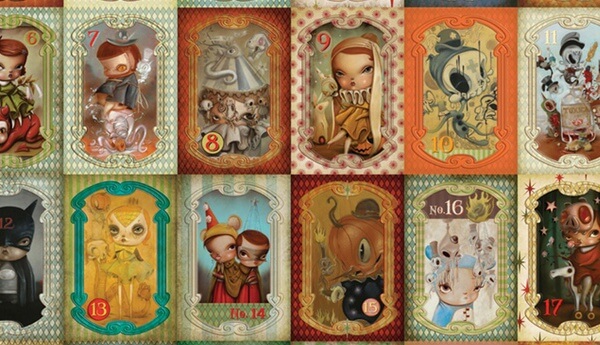 Brandt Peters and Kathie Olivas have been teasing us a few weeks now about an upcoming Kickstarter, and it has finally been announced officially today! This Kickstarter will bring the beloved Calliope Jackalope character to life in a stop motion film that will have some pretty awesome talent behind it – Brandt, Kathie, and Martin Meunier, a stop motion artist who worked on Coraline, will write and co-direct, and this will be executive produced by Jon Schnepp, who recently created a documentary called The Death of “Superman Lives”: What Happened?. The animation will be done by many artists, including some who have worked on The Nightmare Before Christmas. This 8-10 minute stop motion will be epic since it will be the same quality as a feature film, and not some “homemade” video.

The film is described as “Calliope is a post-apocalyptic, fantasy adventure stop-motion animated short film about an other-worldly girl who’s unaware that she’s actually Pestilence, one of the four horseman of the apocalypse.” – Kickstarter Description “Calliope Jackelope has been a part of my world for a long time, on paper and as a toy,” said Kathie Olivas. “Seeing her fully animated in Calliope is the best kind of surreal.” – Press release I love seeing these types of sketches and storyboards when artists first start putting a story together.

Would be wonderful to learn the stories of all these characters that fans have loved over the many years.

Remember, this film will not get made unless it gets funded! It’s only been a day but there are already many backers at almost 7% funded! If the film itself is not enough to entice you to support the Kickstarter, perhaps the possible rewards will =):

There are so many reward levels, with a wide selection of items, that I think anyone can find something that will make them happy to support. But don’t you want this film to get made, regardless of what you can get?? You will have had a hand in making a film made. So, what are you waiting for, go here and pledge! I can’t wait to see it, it’s going to be amazing.