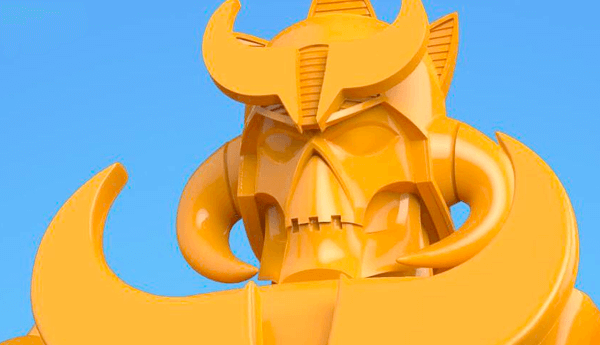 Following the success of Vulkira, the vinyl toy robot, Eric Smith has begun the task of creating his second campaign to further start the rise of the vinyl robots. Working with the ever talented Shinbone Creative, Eric introduces Cronus Magnus! So far we are only treated to the 3D render of the release, but Cronus Magnus will soon get its own full blown Kickstarter campaign. No official details on when this will launch on Kickstarter, but once we hear more, we’ll keep you posted. Vinyl Robots FTW!

In hopes to raise some cash to go towards the production of Cronus Magnus, Eric has hand-casted some mashup resin figures of Cronus Magnus’ pilot, Necro-X (with original head sculpt). The below image is an “ice blue” variant that be exclusive to the Independent Creators Expo, Ohio on Feb. 20. If there are any left, they’ll be available in Eric’s web store. Eric is also working on a short run of the”regular” color scheme (black body, w painted head). Those will also be available at the con with any left overs in Eric’s store.