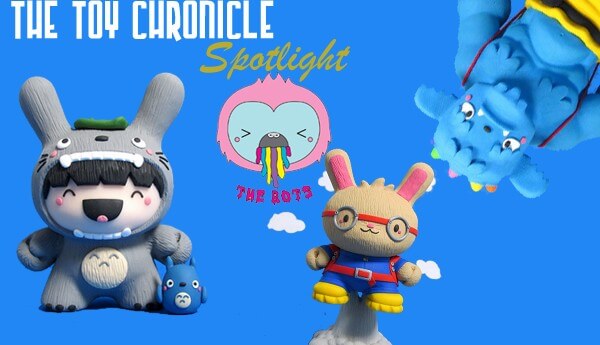 The first photo that got me on Jenn’s Instagram photo, which was an 8inch commission piece for a client. Look how clean cute style and looked like been covered in polymer clay, I just adored the style that they have cute and clever in designs. Simple but effective. Pure Kawaii style!

Take this The Walking Dead 3Inch Dunny set, the cuteness even works with horror. I personally think why The Bots style works so well is they don’t over do a piece, with great colour combination’s and The Bots pastel colour pallet.

The Bots sculpting skills and ideas are so unique. look at this Bone Collector custom, the cracked effect and moss on the mask and the cuteness of the skull chain. The Bots don’t just use Kidrobots Dunny platform they can do any platform for example. “Crayon Monster may look like a big brute, but really he just loves spending his free time coloring pretty pictures!”

This Crayon Monster custom is personally my favourite custom I have seen from The bots. Even the crayons are detachable. This is the first time The Bots have customized a Muttpop Tequila

Not even Breaking Bad can get away from The Bots. Like what you see? go check out The Bots social media sites and get a custom Via Info about The bots

Born and raised in a town better known for its football legacy than the ignored arts program, Tony and Jenn’s adventure into the popular art scene occurred thanks in part to a single character affectionately known as Bot. Due to the urging of friends, family, and mentors, from that moment on they have chased a dream that has led their creations to every corner of the world. What makes their art truly unique, as they have to come to realise, is not only the story it tells, but also the two leaders of the robot revolution–Jenn and Tony themselves.

Tony, a self-proclaimed Grump-o-Saurus Rex, is best known for his shifty eyes, sharp tongue and witty attitude. He’s the idea man, photographer, illustrator, and marketing extraordinaire behind the entire operation. And while his art often represents his attitude, he prefers the computer over the pen and would rather hide behind a camera any day. Likewise, no matter how much he would love to take credit for Jenn’s creations, he has the fingers of a rhino and patience of a 2-year old.

Jenn, who is self-trained in her craft, has the amazing ability to spot and correctly identify a dog from a mile away. And while her art screams kawaii and is highly influenced by Japanese and American popular culture, she insists that she is in all actuality moody and much more emo than she leads on. Her creations and art come in many forms and though she enjoys dabbling in paint and pottery, her passion is polymer clay.

Although Jenn and Tony are each unique in their own right, together they are the Bots.

Ultimately, it is nearly impossible to pinpoint exactly where the Bots’ passion for art stems from. Perhaps Tony could blame his great-great-grandfather Pablo or Jenn her great-uncle Walt, but that would be nothing more than an epic, albeit fictitious, story. In reality, they have no one to blame but themselves for pushing one another’s limits day in and day out.