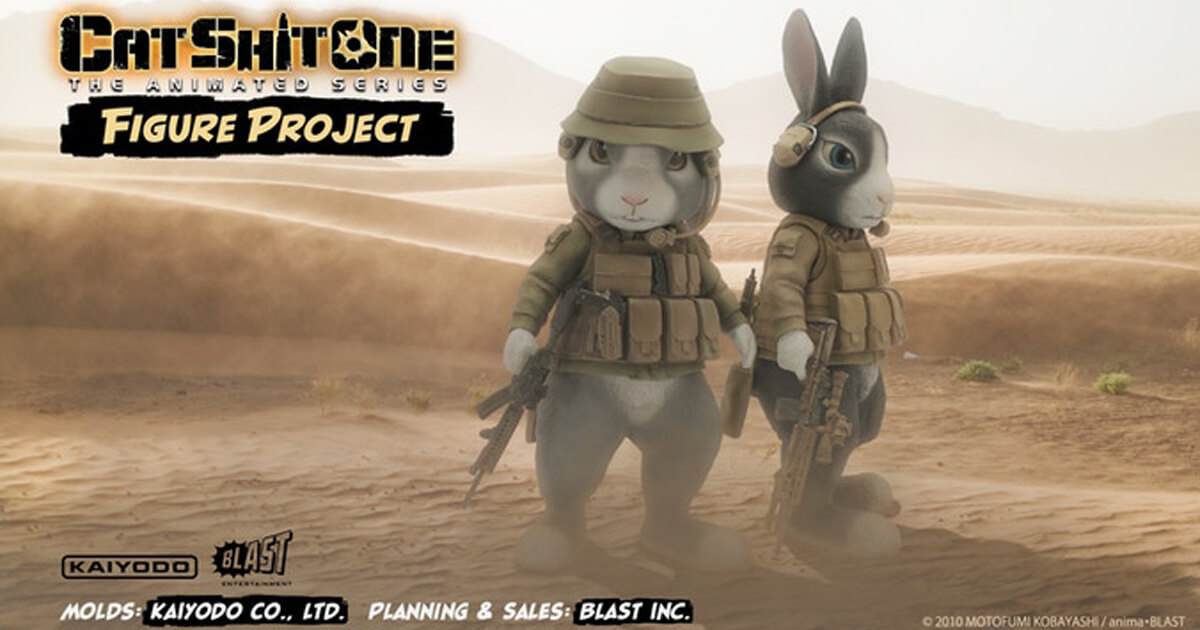 Dreams do come true! Casts your minds back to 2010 when Cat Shit One went viral and everyone scrambled to find the film and FIGURES! Like we said previously HERE back 2015. Wonder Festival 2015 in Japan we saw some photos from Studio Sundowner that emerged from the festival that caught our eye. Having followed the works from Cat Shit One a few of years back (YES Cat Shit One hahaha) spotted some figures! till this day the prototype figures were super RARE and hard to find and no official release was announced. so whats the hype I hear as you read or attempt to read this blog. BLAST Inc x KAIYODO has announced a crowdfunding campaign to make Cat Shit One Figures a reality! Plus your chance to finally grab a copy of Blu-ray and DVD Movie of Cat Shit One! Plenty of pledge tiers.

“Don’t Be Fooled! They have No Mercy!”

CAT SHIT ONE -THE ANIMATED SERIES-, a military action CG animation which took the world by storm, will embark on a 10th-anniversary project!

The English version released on YouTube in October, 2019 marked 18 million views in 5 months!

In response to the loyal fans’ request for the re-release of the legendary “Packy & Botasky” figures, originally produced in the quantity of 100 units only at the time of the initial release on YouTube in 2010, we are starting a crowdfunding project! – BLAST Inc x KAIYODO

GOAL: JPY 30,000,000!
Reward delivery will be decided as soon as the project achieves the goal (all-or-nothing).
Your support is hotly appreciated!

The original comic, CAT SHIT ONE, is a Japanese manga by Motofumi Kobayashi, a renowned military manga artist.
The shocking imagery of fluffy bunnies clad in full military gears and engaged in combats, combined with the meticulous depiction of the battle scenes, became a hot topic.

「CAT SHIT ONE -THE ANIMATED SERIES-」
The movie (English dub; 22 minutes) is available on YouTube.

What is ‘Cat Shit One’? Synopsis: The two rabbit soldiers from Special Force ‘Cat Shit One’, PACKY and BOTASKY, infiltrate enemy line to rescue the hostages captured by unidentified militia. Knowing the hostages are in need of immediate help, they launch a snake attack without waiting for backup.

the movie!
- Audio commentaries by the director and the staff
- Staff Interview
- Trailer for the initial Japanese release
- Behind the Scenes Dubbing session in LA

* Some devices compatible only with PAL format may not play these discs.

Along with the re-release of the premier figures through crowdfunding, a set of region-free Blu-ray & DVD will also be released again!
A total of 75 minutes of special feature footage including the original instruction & demonstration footage by the tactical advisor of the film is included!
This will be the last chance to get the discs that have been discontinued!