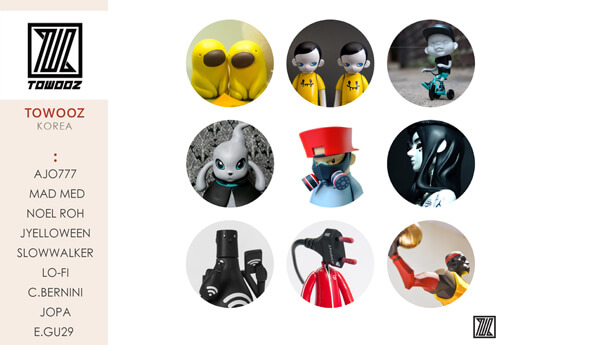 The Korean super collective TOWOOZ, are heading to one of the biggest and best exhibition in Asia, Taipei Toy Festival. 7 of the 9 artist will be traveling to TTF 2015 and all their brilliant showcased. The super collective TOWOOZ consist of 9 Korean artists AJO777, MAD, MED, NOEL ROH, JYELLOWEEN,SLOWWALKER, LO-FI, C.BERNINI, JOPA and E.GU29 in different fields, such as figure, graphic, illustration, etc. The collective is arguably the most diverse with fresh ideas  Lets take a look at whats going to be on show at the TOWOOZ booth.

We love to communicate to the world with each various characters
of ours.

I am now a big chunk consisted with small pieces of memories and emotions created together.I’m working to express the recombination of the pieces.As time passes, the old and new pieces are getting together in every single work of mine. In 1st art toy series, “Rony The Peculiar”, came from the viewpoint of a psychic boy named ‘Rony’ who looks pure but dark somewhere. ‘Rony’ expands and explores his very own world.

Sports designer toy series1 This sports designer toy represent Cristiano Ronaldo who is one of the greatest football star in human history, freekick pose with serious tension become a symbol for this Real Madrid super star.

CHADAN FAMILY Expressed the dissatisfaction with gently humorous to the people, giving personalities to normal plugs.

This bunch of fungus, a single adult always travel with 2spores, reproduce in pack. Organic matter is settled at the top of adult’s hat. You cannot be sure whether these little creatures are edible or not. Required continuous research.

New works to be premiered.

Oscar (Oscar) is a gardener monster that manages the secret garden of the witch. The artist with the perspective of an observer looking to sneak into the virtual world they live in, Sometimes produces releasing the stories about the world through the eyes of explorers through the illustrations and visual modeling work. This is one of several secret garden “Illusion Garden (fantasy garden),” the witch in the background, and the typical vegetation of the place “Belladonna (deadly nightshade)”.

Lo-Fi reinterpreted that music and made two kinds of toys. (Dear Odd & The Survivor)

All Karma series’s expression methods (shape,color,embience) contain a music’s ambience, a lyrics meaning and a ‘Karma’word that involved real meaning.

Karma series, the piece is inspired by Radiohead’s song Karma Police from the album OK Computer.

The lyrics and atmosphere of the song are reinterpreted in the sculpture and explores ideas of forgetting past memories and nostalgia. My name is ‘Arty’! The street is just his canvas! He is drawing his dreams on the street. The graffitist.

The collective are growing from strength to strength, year by year bring new designs worldwide. The photos above are just a dip in the water what art toys are available. A62 Booth not to be missed.