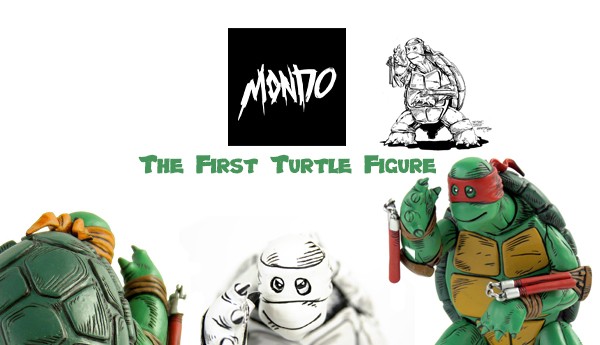 We are super excited about this release! Mondo have put up pre-orders for “The First Turtle Figure” perfect for TMNT and comic history fans. The concept is from the creators of TMNT Kevin Eastman and Peter Laird. Standing at Approx. 6.5 inch figure with articulation points it will for sure be a sure hit.

In 1983, Kevin Eastman and Peter Laird were doodling on napkins, playing around with an idea that initially began as a joke. Little did they know what started as a sketch, would turn into the phenomena known as Teenage Mutant Ninja Turtles. “We’re proud to honour the history of the Turtles with a figure based on the very first illustration of a Teenage Mutant Ninja Turtle, as drawn by Kevin Eastman. Featuring 5 points of articulation, and illustration-accurate details, The First Turtle is perfect for TMNT and comic history fans alike!” The transition from sketch to figure looks very accurate! Also price at $65 (around £41) You can pre-order them at http://mondotees.com/collections/all . No word if the other TMNT colour will be released yet.