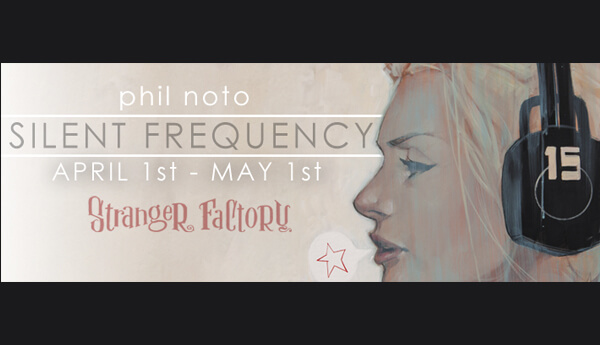 Stranger Factory  is thrilled to present a new exhibit in April from returning artist Phil Noto!

“Phil Noto is an Eisner nominated American painter, comic book/ concept artist who is known for his work on such titles as Black Widow, Jonah Hex, Uncanny X-Force, and most recently Star Wars (Chewbacca and Shattered Empire). After a 10 year career at Disney Feature Animation, he started to work full-time as an artist for Marvel, DC, Image Comics and Dark Horse, and as well, time in gaming working on such blockbuster hits such as Bioshock. ”

“Silent Frequency finds Noto’s signature style in top form, as the artist brings beautiful new paintings to life, comprised of soft dream-like portraits juxtapozed with bold graphic elements and typography. This newest body of work hints at sci-fi, transporting the viewer further into the artist’s future vision often playing with modern advertising illustration techniques, with nods to classic pulp cinema posters, and silver age sci-fi novels. Covers to books yet to be written, posters to films yet to be; Noto’s master paintings are portraits of future protagonists with secret pasts, often portraying subtle expressions that few artists are capable of capturing, drawing us further and further in to his continued narrative.”

“Silent Frequency” opens Friday April 1st, from 6-9 pm with a reception open to the public.