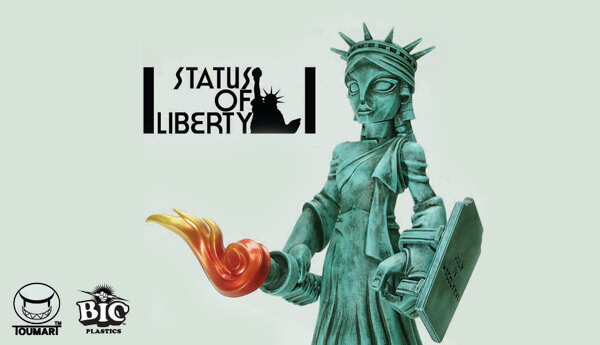 BIC Plastics is proud to announce its new Status of Liberty vinyl figure from Japanese artist Touma. Touma’s signature is seen throughout Status of Liberty especially the long arms.  A timely play on words, the figure is Touma’s interpretation of the iconic Statue of Liberty and reflects changing times and new challenges. We love the fact it has a meaning to the piece.
[slider source=”media: 55095,55094,55096″ limit=”94″ width=”700″ height=”1000″ title=”no” pages=”no”]

Overlooking Manhattan and the Hudson River with torch held high for all to see,  the iconic Statue of Liberty is a powerful symbol of freedom and equality—core principles of the United States of America.   Recognized the world over,  the monument was a gift envisioned by the French who sought to permanently honor America’s commitment to liberty, reaffirmed with its then recent victory in the Civil War to end slavery.  In the years that have followed since its dedication, the Statue of Liberty has welcomed millions of immigrants to America and served to inspire new generations to dream about breaking new barriers and limitations.  While it has stood in place for more than a century, Americans have learned that the triumphs of liberty can be fleeting.  That liberty is not permanent, not static, but always in flux and continually under threat. While the nation cherishes the timeless monument, it is the ever-changing status of liberty that defines the everyday struggle for equality and freedom from oppression and in many ways, America itself.

While monumental, the end of slavery in America was just the beginning of a winding road for those not in the majority, those who are different in one way or another.   Acceptance of profound difference has not come easily and not without considerable struggle.  Only recently have those whose differences revolve around previously unchallenged social institutions tied to gender relations begun to achieve the same taken-for-granted liberties as the majority.  Far from over, this latest civil rights movement reminds us that the definition of liberty is constantly changing, growing and highly contested.

Beyond new horizons and dimensions of liberty, America finds itself struggling to preserve well-established freedoms—the routine is now subject to security restrictions prompted by the aftermath of 9/11 and the ongoing threat of terror.  While removing one’s shoes or leaving water bottles at a checkpoint, may not at first seem like a question of liberty, they are in fact readily visible reminders of the shifting balance of freedom and security.  Recent national security revelations have shown that the cost of security can be high, far beyond what many would consider travel inconveniences. Once assumed private, everyday communication is now subject to surveillance in the name of public good and safety.  The extent to the costs may well go beyond these security measures once shrouded in legislated secrecy.

The majestic Statue of Liberty honors America’s triumphs of freedom over tyranny. In today’s increasingly complex world, she also serves as reminder of the need to be ever vigilant and mindful of the ever changing status of liberty, the one effective shield against the erosion of hard-won freedom. The figure stands 10″ tall in an ‘iron green’ color scheme featuring a weathered/patina effect.  Status of Liberty wields  a vibrant fiery torch (metallic effect)  and a shield fashioned from her tablet.
Buy now at http://bicplastics.com/shop/index.php/ priced at $130. 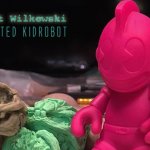 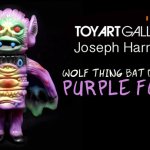