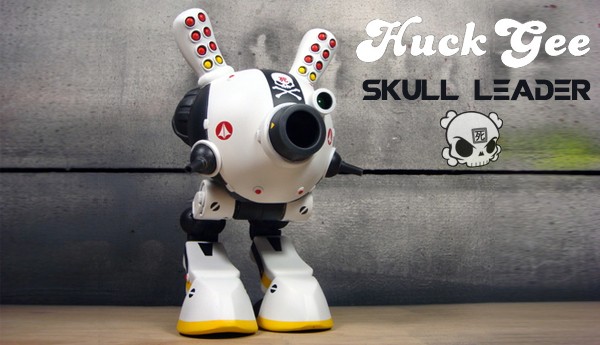 This awesome Huck Gee mech ticks all my boxes from the colour way to the movable turrets! Huck’s production looks freaking amazeballs. Robotech inspired scheme just works so well with this mech and at a knocked down price surely Huck will have his work cut out making these bad boys.

Robotech was profoundly influential on my childhood. It was unlike anything I had ever experienced at the time. Not only was the story mind-blowingly epic, beautifully drawn, with touches of romance, and giant transformable mechs battling massive battle hungry aliens… but it was the first cartoon I had ever watched in which a character died. And not just any character but a tough, charismatic lead: Roy Fokker, AKA Skull Leader.

I know Robotech’s production history. I know it was originally released in Japan under the title Macross and that the 2nd and 3rd story arcs were kit bashed together from 2 different anime series. I’ve never really dug into it but I assume there’s purists out there that would poopoo me for not referring to this series as Macross. But for me, wether the enemy is Zentraedi, Masters or Invid, the show will always be Robotech. That’s how I was introduced to it. That’s the series that inspired my adolescent impressionable self. Twenty odd years later I feel enlivened to revisit this slice of my youth.

This piece is a mash up of a lot of ideas and it may be my last figure release for the year. Based on the reaction from the teaser photos I leaked, I foresee stupid demand for this. Especially at this lower price point of $450. That being said, you may not hear much else from Huck until January.

I should probably buy a sleeping bag for the workshop and stock up on bottled water and rations. Skull Leader will be available for 24 HOURS ONLY directly at www.huckgee.com for $450 plus shipping. It will be available beginning this Friday, October 31st, at 11am PDT. This will be removed from the store at 11am PDT on Saturday, November 1st, and not offered again. Please allow 6-8 weeks for shipping (we will do our best to ship these by Xmas to anyone that specifically makes this request).

The figures have unique dual leg joints and swivel at the waist. It stands anywhere between 8 and 12″ tall. Each figure is signed and includes shown accessories. Due to the nature of the materials, some minor differences should be expected in each piece. (All Info and photos lifted from HuckGee.com)