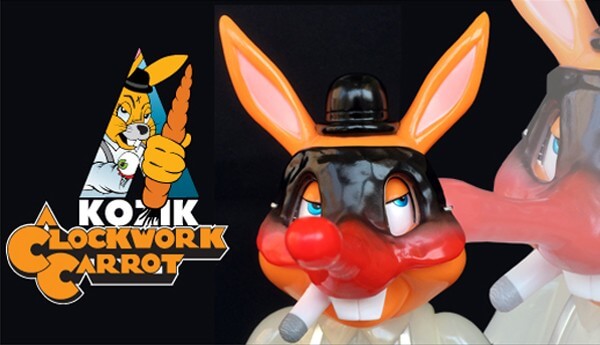 BlackBook Toy are proud to announce the release of new edition of Frank Kozik’s Lil Alex from his “A Clockwork Carrot” series. This new edition, Break In, comes with “that” notorious mask as seen in movie. The OG and other colourways of Lil Alex was already dope but this addition to the A Clockwork Carrot series is epic have that mask and OG style colourway.
“In Smorkin ‘Labbit familiar low blow Art greats Frank Kozik (Frank Kozik) and the project of my BlackBook Toy, “A Clockwork Carrot” Break In Edition appeared that mask of new parts were included with Lil Alex of! Kozik tribute piece to A Clockwork Orange, which does not stop to admire is! Darken the rumor of Alex of madness in the play to Kozik taste, three-dimensional. Three-dimensional in the non-standard size of 11.25 inches (28.5cm) in soft vinyl figure of MADE IN JAPAN! The Break In Edition is making a mask that was worn in that scene in the movie as a new part!” This “Break In” edition looks like previously released OG edition, but very much different. Casted in Milky white(OG is just white), which has translucent looks. Painted eyes in metallic blue(OG is just blue) and suspender, buttons and codpiece are in silver(OG is grey).

Lil Alex comes with all the iconic accessories like the crowbar and the deadly knife, plus you can take off the mask too.

New mask is sculpted by T9G like Lil Alex itself.