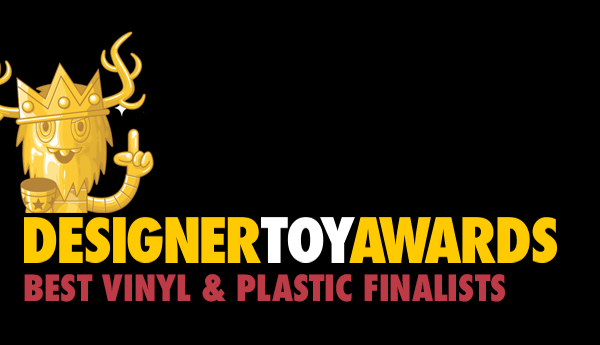 Presented to the best Designer Toy platform manufactured using “Western vinyl,” which typically means manufactured in China. The manufacturing quality, sculpting, and innovative colour variations will all be considered for this award.

Please note: This category is only open to platforms cast mainly in “Western vinyl” (usually from China), but includes other types of western plastic such as ABS, PVC, etc. Pieces made out of sofubi (Japanese vinyl) should be entered in the Best Sofubi category.

Requirements
• A release must be a brand new Designer Toy or a significantly modified version of a previous release, that was debuted last year.
• The majority of the release must be made out of vinyl, not including soft Japanese vinyl (sofubi) which has its own category.
* Must be a stand-alone release and not part of a series (see Best Mini-Series).

Massive congratulations to the nine finalists in the Best Vinyl & Plastic category. Definitely more than one contender for this title. Could be interesting!