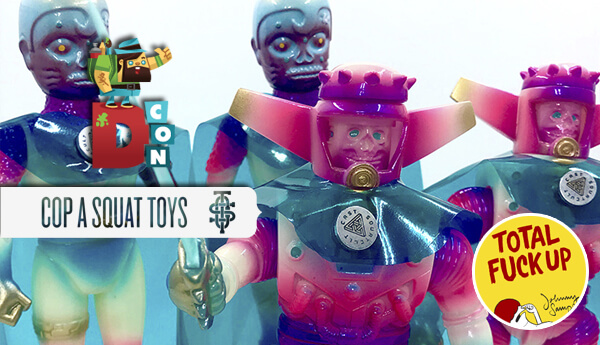 Cop A Squat Toys is heading to DesignerCon and he’s bringing heavy back up. But that’s not all, Cop A Squat Toys finally revealed ‘Total Fuck Up’, a figure he’s being working on for the past year with Johnny Sampson; “Total Fuck Up is the title character from the comic of the same name. He’s a lovable burn-out loser who means well but usually fucks everything up.” Johnny Sampson is a cartoonist based in Chicagoland, USA. He self-publishes much of his own work, but you can also find his comics in the pages of MAD Magazine, Seattle’s The Stranger, Desert Island’s Smoke Signal, on vice.com [1], and in comic shops across the country.

Total Fuck Up will drop in his traditional Black, Red, and Yellow on White sofubi and stands 4″ tall. Comes bagged with header card.