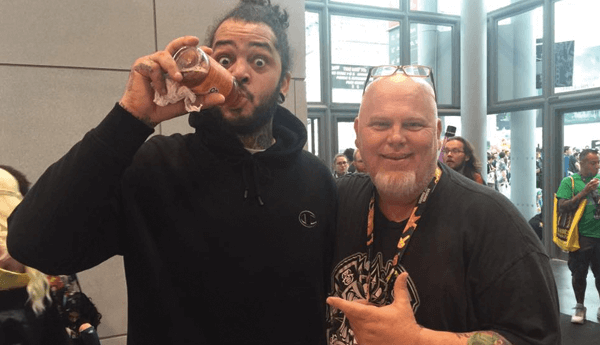 We wanted to introduce FINALLY the man that is behind most of our Facebook LIVE streams. With TTC based over in the UK, it’s always great to have someone in the US to help capture the moment at such fine establishments as Clutter Gallery and myplasticheart. We have that with the awesome Mr Rob Lumino of For The Masses Podcast fame. We’ll let him take it from here with his introduction…

A big fan of designer toys (he used to be a huge fan but weight loss surgery took care of that) Rob Lumino entered the scene way back in the early teens ( or maybe 2010). First purchase—LABBITS!!!! Smorkin Labbits. And those damn Labbits are a gateway vinyl. Pretty soon those damn Labbits turned into a $1000/day art habit. But opening a vinyl toy store cured that.

SubUrban Vinyl was Lumino’s finest moment and it got him closer to bankruptcy. But there is where The Toy Chronicle got lucky. Because of his down on his luck stature (read: broke), Rob does his finest work behind the phone (a tad shaky due to the vodka intake) as the East Coast correspondent on FB for The Toy Chronicle and its faithful followers!!!! Oh, and he hosts a podcast too. ForTheMasses with ChrisRWK, quite possibly the greatest artist to ever do a podcast with Lumino.

Go check out his LIVE FB streams on our Facebook Page HERE.

For The Masses Podcast can be found on Facebook HERE.

If you wanna listen to the soothing tones of Lumino & RWK, you can head on over to their site and give them a listen HERE.