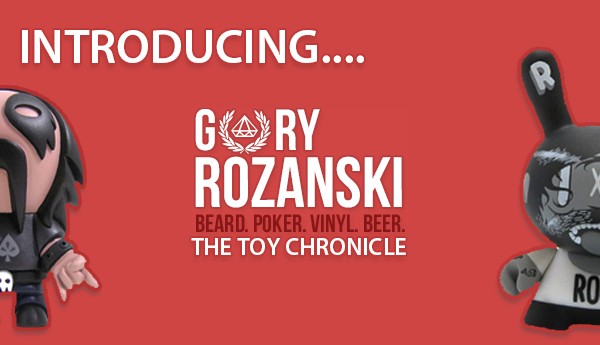 *In the first of many a bio, we are going to introduce you to the team of The Toy Chronicle*

I should introduce myself, I’m Gary & I’m a vinyl addict. I have a weird fascination with the smell of new vinyl. The feel of vinyl. The buzz from opening a new blind box. Yeah, I’m a bit of a weirdo. Fact. I wasn’t always this way, well the weirdo bit maybe, but not a vinyl addict.

The vinyl addiction all started back in 2006, before then I was a bit of a Lego nut (I still am, just no room for it). I have always had an obsessive, collective nature. I had boxes upon boxes of Lego. Always on the look out for new sets as a kid.

So in 2006, I was in Leeds and I caught sight of this toy that instantly grabbed my notice. It was the Nic Cowan Dunny from the Los Angeles series. I bought it on the spur of the moment. I was instantly hooked. I’ve travelled around the States & have been lucky enough to visit Kidrobot HQ in Boulder, CO. I had the fun that was involved around going to New York Comic Con – wall-to-wall geeks. During the last few years I’ve built up quite the collection of production & custom Dunnys. Whether the Dunny is production or custom, I love a nice, good, clean lines in the design. I think if I had to pick out, of my collection, my favourite piece – whilst it’d be a bit of a struggle as I have so many awesome pieces – I’d have to go with my custom Ghost Girl – Mariah – that was done by UNCLE Studios. Designed like a Día de Muertos skeleton lady. He did such an epic design on this platform. Outside of the vinyl world, I love my beard. Probably a little too much. I play a whole bunch of Pub Poker. I try to blog about stuff here. I’m hooked on watching & reading Game of Thrones. I am a huge Leeds United fan, as well as a Boston Red Sox baseball fan. I may like the odd beer or three. Also, I have two awesome cats, they’re both little buggers but love them nevertheless. Even at 3am when they run cray cray through my apt.