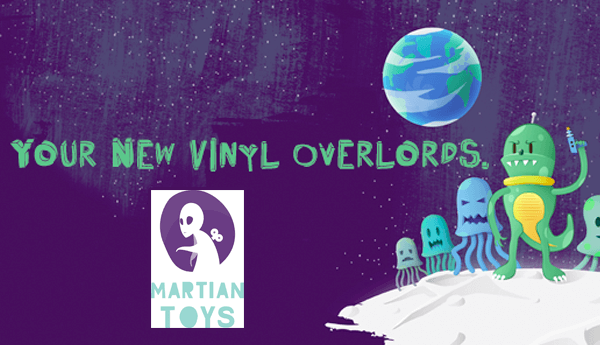 One of the hottest properties in Designer Toys right now are Martian Toys. Martian Toys are everywhere right now, and rightly so! This week they hit their 10 month anniversary, yeah they’re only new on the scene but they’re setting it a blaze with huge convention presence and a great outlook on the Designer Toy community. The Toy Chronicle were lucky enough to meet Martian Toys at NYCC in October, and Designer Con last month. We got the opportunity to ask a couple of questions for you all to sit & enjoy. So, well are you sat down? Then begin…

TTC: Why don’t you tell everyone who Martian Toys is, and what do you guys stand for?

Martian Toys: When we were thinking of a name last year we wanted something that evoked both retro science fiction and pop surreal. The name isn’t necessarily to be taken literal. Funny, we have had artists ask us; will we only accept alien toys as customs?! Martian Toys is more about cool toys from another place not literally from Mars. : ) We see ourselves as pretty inclusive, we love a lot of artists in the scene and appreciate many of the sub genres. 2014 was a down year for designer toys and David and I saw an opportunity to step in and help the community mostly. It’s very important that artists, the stores and the producers build each other up. The goal should be to evangelize the coolness of art toys and grow the scene. We’re aware of the urban / street art roots and the tradition of trashing talking. Friendly competition is great but the emphasis should be on the friendly part. When there are half dozen companies the size of hasbro then we can all celebrate.

TTC: 2015 has been a rather epic year for Martian Toys. You guys ruled at NYCC and DCon. It must feel pretty good right?

Martian Toys: We haven’t had a lot of time to reflect. I think the first half of the year we were busy just figuring some stuff out and then the second half has been straight out with the two big shows and trying to manage 2 of the most insanely massive group shows ever put together! We learned a lot that’s for sure. Definitely recommend keeping the show to under 50 artists in the future!

TTC: The Space Crab Wars rocked the house at DCon, what was your inspiration for such a massive show?

Martian Toys: I have to give artist, Dril One much of the credit for the initial idea. In 2014, he did 2 amazing customs using the Space Crab (Wheaty Wheat) platform. First he used a dunny as a pilot then a Cranston. We thought -how versatile; each artist could interpret the head or pilot differently and co-brand the piece. It also made since being space related. I approached Dril with the idea and he wanted trophies! So we got Nico of Absurd Toys to design some trophies. Dril set up a friendly wager with Brit, Jon Paul Kaiser that his american crew could kick the European side’s ass. Well, it didn’t exactly go down like that… Intead Dril ending up buying JPK a beer or two after the show! 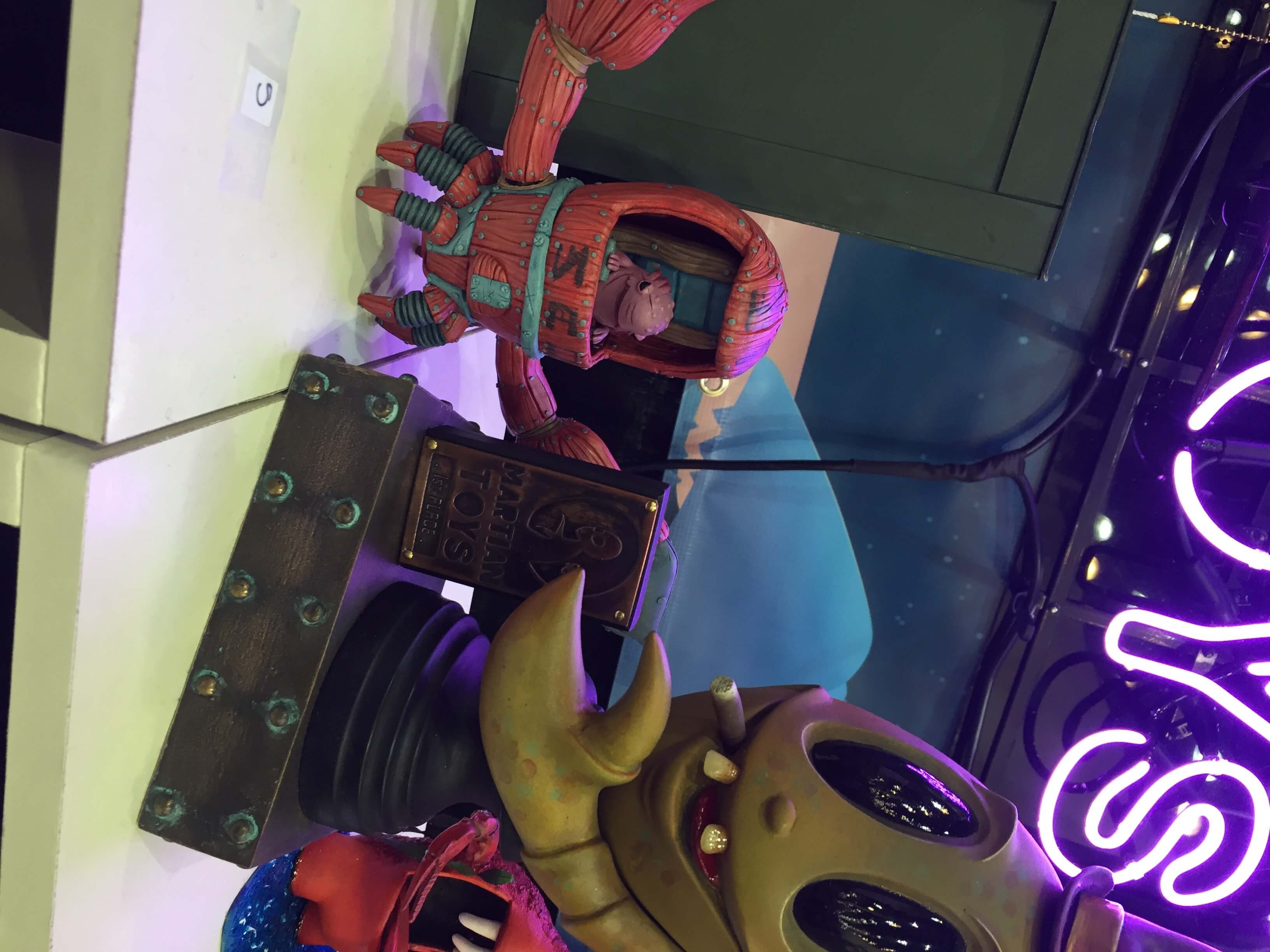 TTC: We can only imagine the organisation it must have taken to round up all those artists.

Martian Toys: Most definitely! Lots of running around and I want to call out artist, Malo April. She was the eyes and the ears on the ground and she fixed a few broken space crabs as they arrived in Los Angeles too! So round of applause for April. She rocks! Congrats to our captains, judges and the top five trophy winners – Map-Map, Fer Mg, Daniel Fleres, Frank Montano and Michal Mizsta.  You can read about the Space Crab Wars HERE.

TTC: Can you admit that UK & Europe totally smashed the US?

Martian Toys: Well, I think both continents produced great work and it came down to three outside judges. I will say this, like music, scene The UK has an impressive pool of talented toy designers concentrated in a relatively small land mass. Also Spain is really coming on strong, by my count there are 8-10 world class toy designers now in Spain like Wuz One, HX Studio, Fluke Graf, Fer Mg… I won’t name them all. But congrats to Fer Mg winning 2nd Place – he like Martian Toys has been doing designer toys for less than a year!

TTC: What are the plans for 2016 for Martian Toys?

Martian Toys: There are a lot of irons in the fire. I won’t reveal everything but I will say this much, I think 2016 is going to be Quicc’s year. We see him as a young Huck Gee. It’s really exciting to think about playing a role in where designer toys go next. I’m looking at a white board here at 2:45 a.m contemplating 11 potential projects. Obvioiusly they can’t all happen this year but we will work as hard as possible to give collectors the stuff they want. I think it’s great to see kickstarter playing a bigger role and the rapid advancement in 3D printing is going to change the game eventually.

TTC: It’s been an absolute pleasure to meet Martian Toys this year, what has been your highlight this year?

Martian Toys: I guess the obvious answer is the release of Jason Limon’s Abominable Snow Cone. We are proud that we got to help him release this as a vinyl piece. Of course, the better answer was getting to meet Jason and the other artists who came to the shows. We are truly amazed at how many nice people there are who just happen to making some very cool stuff! We had a lot of fun and if you can’t have fun doing this then you probably can’t have fun! 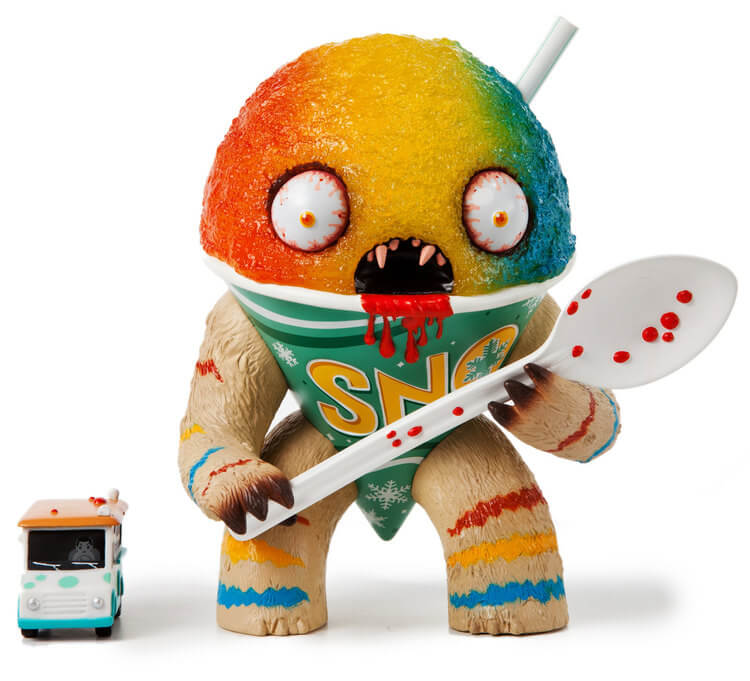 Thanks for taking the time to answer a couple of questions for The Toy Chronicle! We look forward to having a beer in London in April!

You can follow Martian Toys on Facebook, Twitter & Instagram now. They are also currently hosting a pretty sweet competition to win a trip to ToyConUK 2016 in London next April. You can check out all the details HERE.