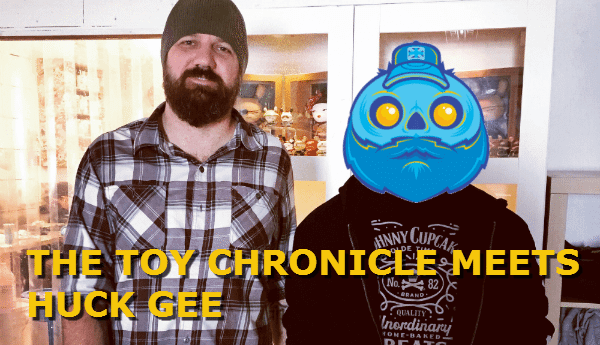 Huck, if you didn’t know, is British – born in Newcastle-upon-Tyne. So we see Huck as one of our own despite moving over to SF when he was around six years old.

Meeting Huck on the street, in the glorious Californian sunshine, he’s taller than I was expecting. I had forgotten my sunglasses back in London, so I squint as Huck points me in the direction of his studio.

You would never guess it was a studio from the outside. A battered green door greets you first. The studio is amongst a host of car repair workshops. Huck is uber-friendly as he welcomes me in to his 100+ year old studio. His studio is cosy and stripped down. The floor and ceiling going for an ‘au naturel’ look. This makes the walls even more impressive and stand out further as each wall is either rammed shelves or cabinets full of Huck’s work or collections that has caught his eye over the years – Huck loves Donatello from Teenage Mutant Ninja Turtles!

It is a thing of beauty spending time going through each shelf. Huck hasn’t risen to the top of the Designer Toy game by accident, the true amount of high quality art, prints, vinyl toys that have been designed & produced by the hands of Huck is amazing. Through a set of plastic dust protector doors is where the magic happens. Huck has a team all working feverishly away on the Skull Leader that Huck designed back in October last year. I leave them to it.

Huck has recently rebranded his website & store during Valentines weekend. On his website, Huck has filmed a short video giving his thoughts on where he is at. It is definitely worth a quick watch. We included the video below.

You can sense from meeting Huck that he has some big things in store for the future. He speaks passionately about the Designer Toy scene, about his plans for the upcoming year. His tone drops as he reminisces about past experiences, challenges he has faced. The Designer Toy world can be an interesting set of cogs that we the customer don’t often see. It is probably for the best too. I think we’ll see a new & rebooted Huck over the course of the next year or so.

He shows me blueprints & drawings for a new project he has planned – they’re impressive. Really impressive. Huck digs through his many drawers and pulls out a prototype of another project. Again, this is superb. These are going to be amazing when they drop. You can see the excitement Huck has in his eyes for these new projects. You’ll have to keep a close eye on The Toy Chronicle for further details.

Before we embarked on our San Fran trip, we asked you guys for questions to ask Huck. We received some really great questions and Huck was more than happy to provide some answers. So settle in and have a little read..

TTC: Do you miss UK?

HG: Not, not really. I was too young when I left to really miss it I do however feel nostalgic about the old country. I have visions of wet countryside and tumble down rock walls that evoke a desire to go walk the backroads. Go walk through the old northern coal mining villages of my parent’s youth. Maybe someday… when my kids are old enough to explore with me.
TTC: Having seen the highs and lows of the toy art community what do you think of the future or art toys?

HG: This scene has continued to evolve since day one. It’s amazing to think back on all the bends and twists that it has progressed through. Some epic highs. From massive crowds and the explosion of “vinyl” companies to watching those companies implode and watching the original roots take hold. I suppose I see the future growing out of those roots. The handmade art toys. Peeps making small batch runs at home and distributing to their fans online. It’s awesome watching the movement grow. Hand crafted, mold making, hand poured resin. Folks making toys in their kitchens and their bedrooms. And some with much better quality than what you see coming out of the larger factory produced stuff. Beautiful crafted art works. There will probably always be a niche for the mass produced factory stuff but I think today is proving that the future is all about getting back to it’s roots.

TTC: Being from Newcastle, Do you miss the Brown Ale?

TTC: We see a few artist moving into, or at least trying to get a foot into, sofubi. Any plans for a Sofubi range?

HG: Nope. It’s never appealed to me. It’s too simple. Sofubi is too easy to my eye. Has never resonated with me.

TTC: Is their any up and coming artist you would like to work with in the future?

HG: There’s tons. A lot of great new artists developing new creations. I’d like to see quite a few of them get their dues. It’d be hard to pick just one.

TTC: Where is the best place for food if you had to choose one?

HG: Ha! see, I hate picking favorites. So many different food cultures to choose from. I love good food.  My GF has been cooking up some pretty awesome meals in my kitchen as of late. She makes a damn mean chicken pot pie. Oh and bacon jam. Who knew that was a thing?

TTC: Any plans to come to the UK for a show?

HG: Maybe. Maybe next year if something pans out.

TTC: What does Huck Gee do for a chill out time ?

HG: Used to be video games but with 2 young kids at home it’s hard to find the time. These days it’s walking my dog or watching TMNT on the sofa with my daughter. And me probably falling asleep if it’s late in the week. But that’s just about perfect.

TTC: You have apprentices what are the most important things you try and teach them?

HG: Be a problem solver. This is key to life. Don’t smash your face into the wall and tell me, it can’t be done. It can be done. Figure a way around that wall.

TTC: How do you keep your ideas fresh?

HG: Make time to reflect on your process. Turn off the noise. Long walks.

TTC: What is the one advice that was given to you that you’d like to offer to our readers?

TTC: You like cars any chance of making some Huck car accessories?

HG: I’ve got some wheels being released as we speak: The HG5. I wanted to design a wheel that was simple, bold and that appealed to my eye. A 5 spoke that’s easy to clean and would look sharp on an STi. I’m quite happy with how they turned out.

Many thanks to Huck for the great hospitality whilst we were over in SF. Thanks for taking the time to answer the questions posed.