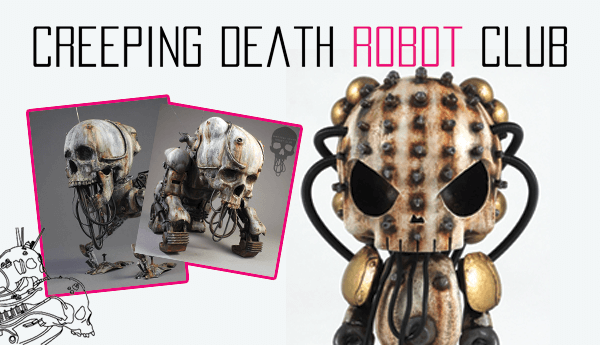 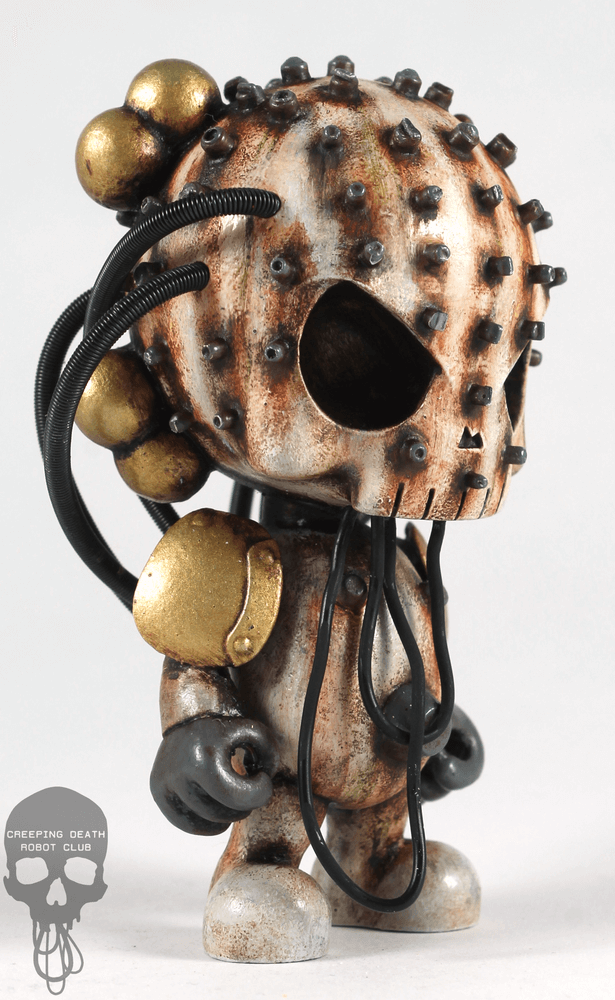 No wonder it sold quick-fast! Fear not though, we’ll bring you news further in this post about other available releases but first let’s give you some background on Klav and Creeping Death Robot Club…

Klav started doing customs a few years ago after he was pretty established in the sci-f modelling world. He wanted something more creative than an OTB (out of the box) build.

[quote cite=”Klav”] American modellers don’t really like when you stray from the original ideas though. I’ve been told multiple times that “I do it wrong” and “I’m wasting hard to find kits”… Japan, however, loves customs.

I started doing variations of Maschinen Krieger kits and they took off in Japan, so I moved on to my own things after that.[/quote] 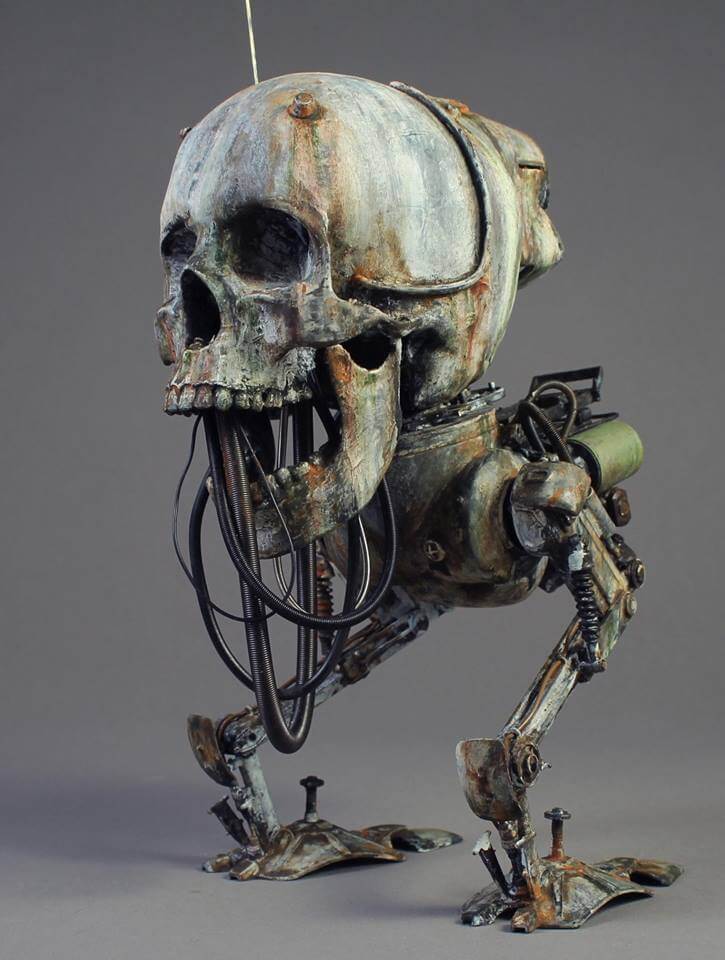 A good amount of Klav’s original customs is drawn in 3D and then printed. Klav will then add bits & pieces from his stash of models and toys. The skulls that Klav is most recognised for are 3D prints off of some dudes MRI he found on the internet – which is pretty fucking neat, right?! The kit bash/customs Klav does are normally based on a Maschinen Krieger kit with some other element added. Either another kit or 3D printed. Maschinen Krieger is a science fiction universe created by Japanese artist and sculptor Kow Yokoyama in the 1980s. You can read more about Maschinen Krieger HERE on Wiki. 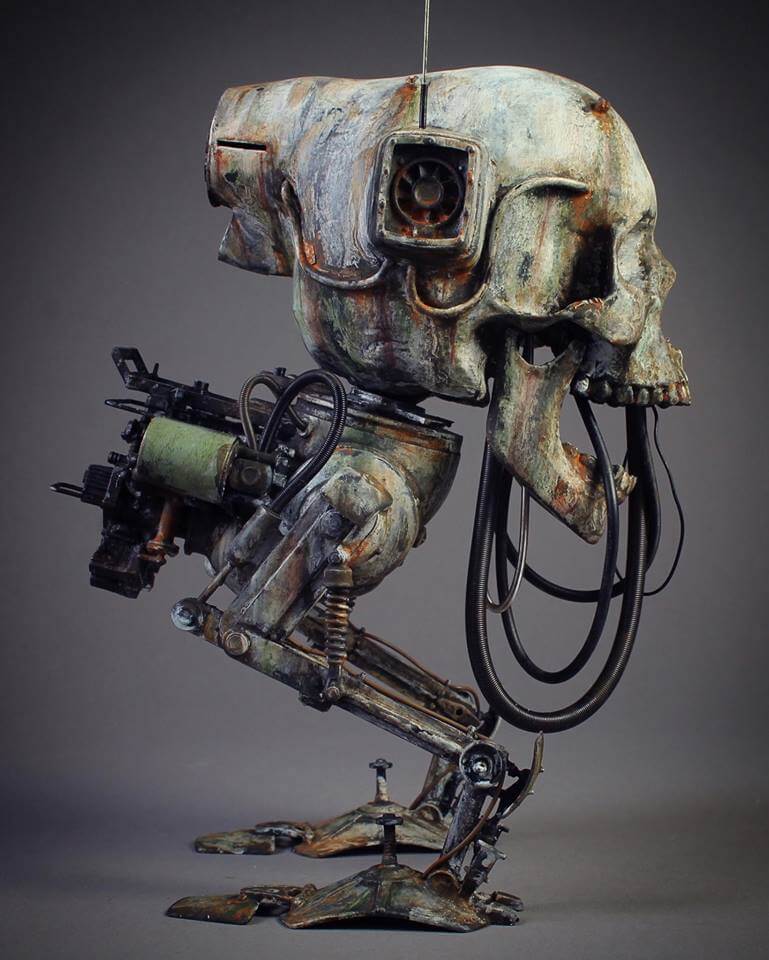 [quote cite=”Klav”] Definitely, one the many Death Krote (Pictured above) I have done over the years. 3D printed skull on a Maschinen Krieger body. I’ve done 4 in the past few years. Most of them are 1/20 scale but one was 1/12 on a 3A toy body.

I really enjoy a full scratch more than just a custom build. There’s something more satisfying about making your own stuff. But at the same time, I could paint my shoe and have a total blast doing it.
[/quote]

I think we have to agree with Klav, the Death Krote is one of our favourite pieces too. Just down right dirty good! We would totally be down with seeing Klav customise his shoe too. Perhaps next year at Five Points, Klav?!

What does the rest of the year look like for Klav, well, great question! Klav is currently working on a new small batch of resin robots – SQ1 – which you can see below. These will be available in the near future HERE and priced at a very reasonable $110/£85. We have no date of release as yet, but we’ll keep you posted with details once they become known. 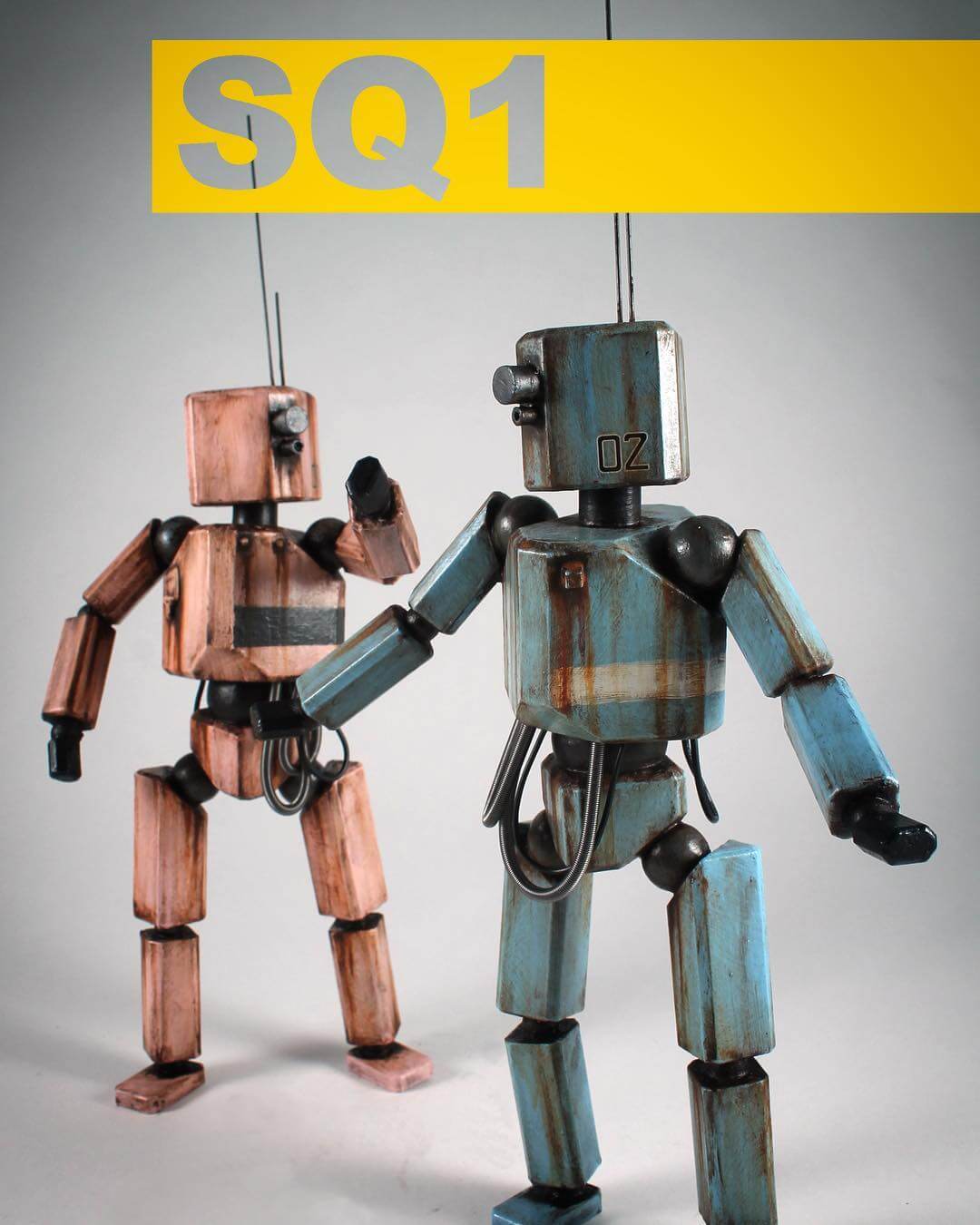 If you’re itching to own your own piece by Klav, you should definitely check out his available work below, these are all available on the Creeping Death Robot Club store HERE. 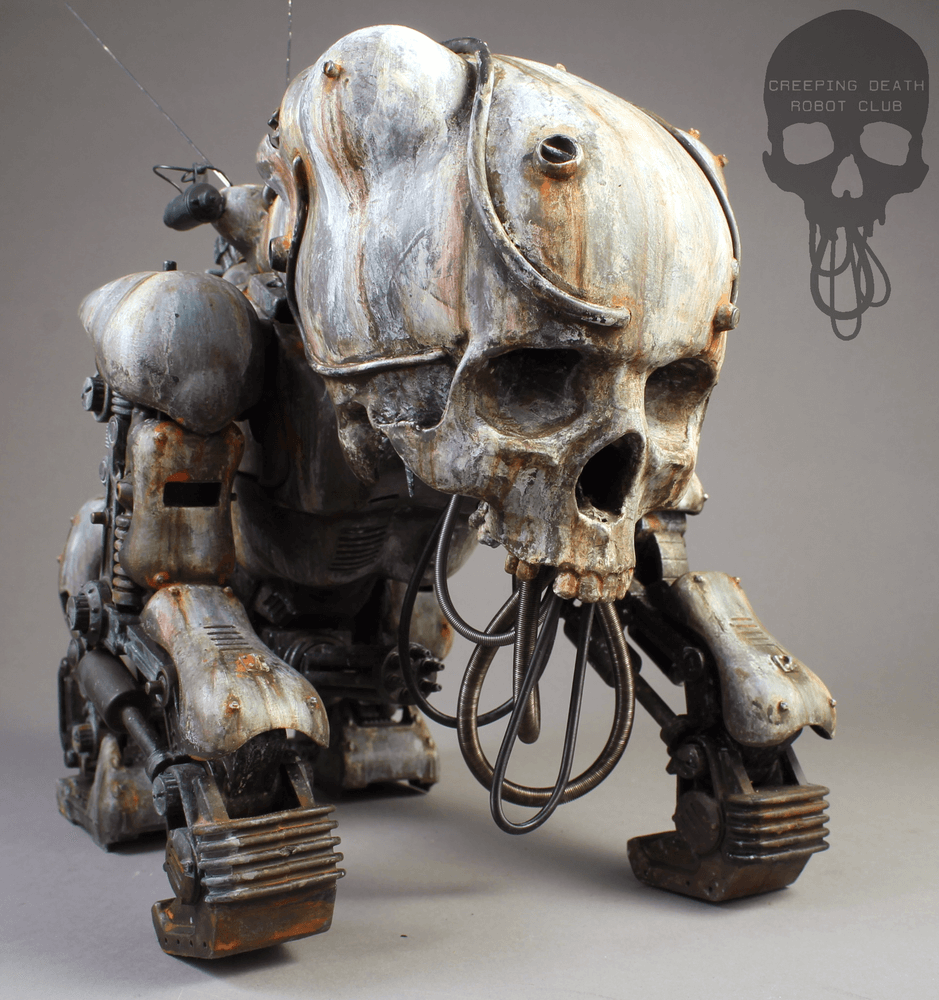 Death Gorem is a mutation of 1:24 Vintage Zoids Gorem and 3D printed human skull and stands about 9inches tall. Death Gorem is available to purchase HERE for $650/£500. 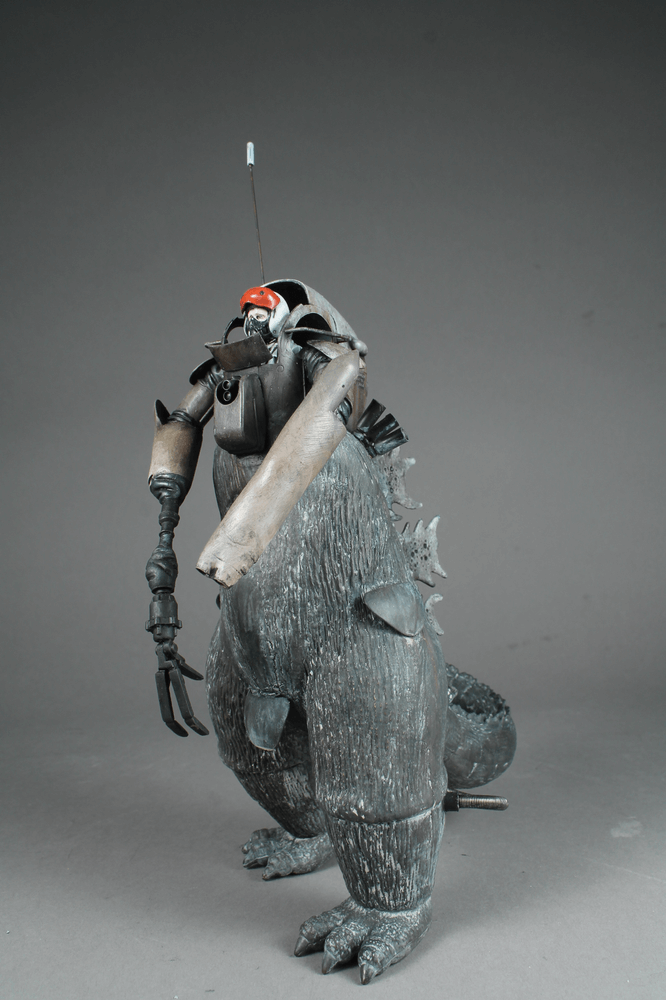 MaK-Zilla is a custom 1 of 1 Bash / Mutation of Ma.K. Gustav and Godzilla. Again, standing at 9inches tall. MaK-Zilla is available to purchase HERE for $150/£115. 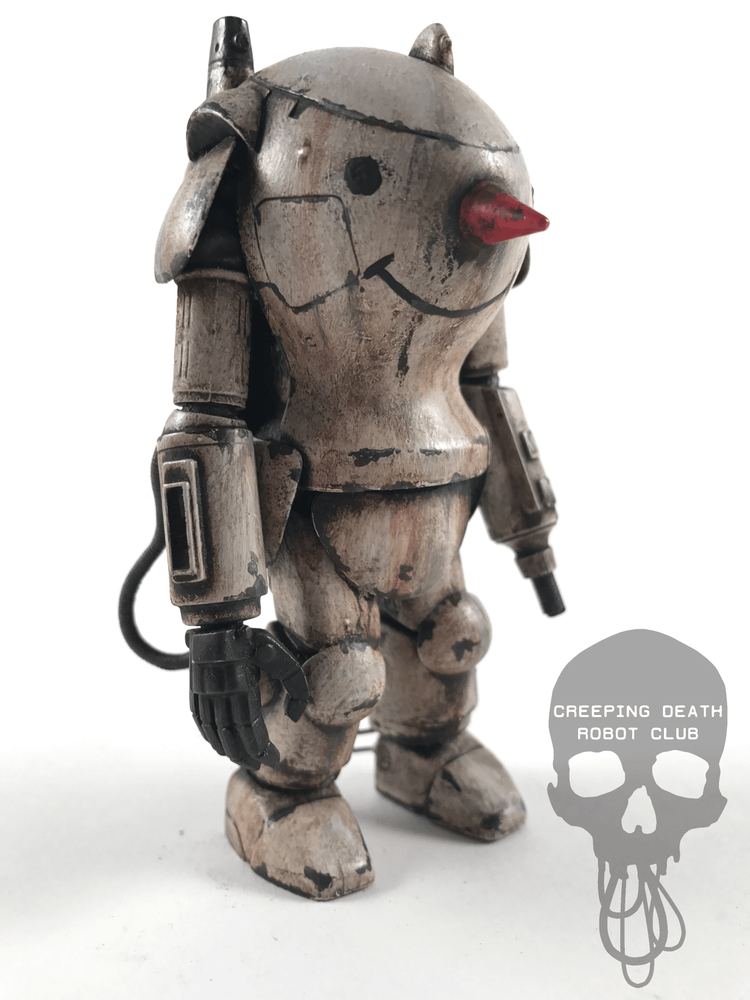 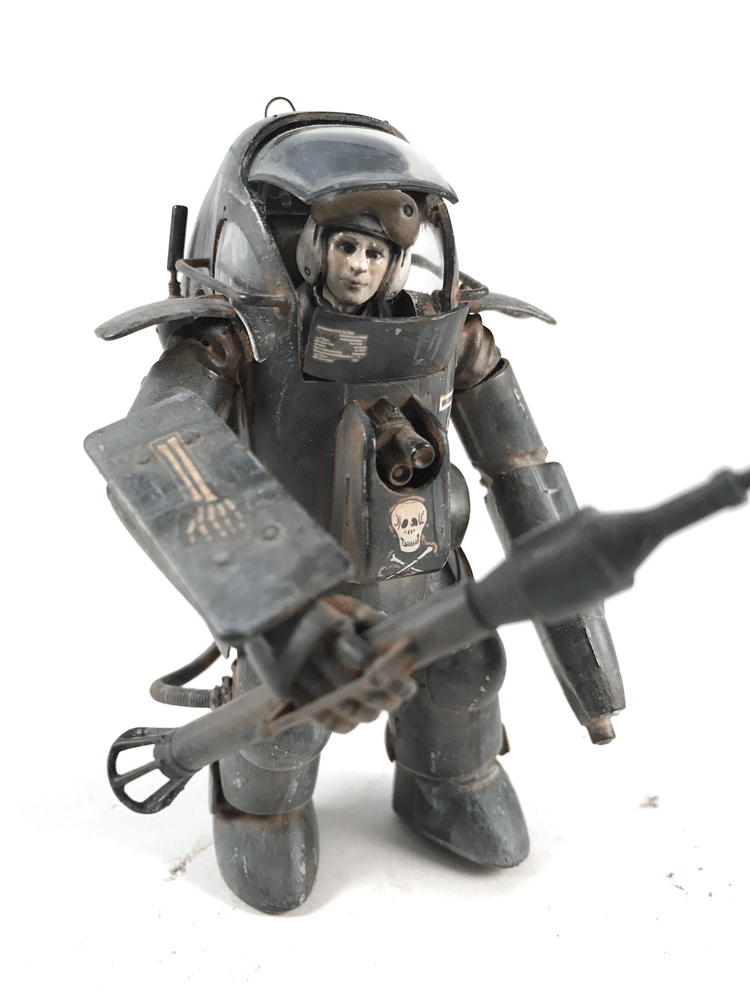 FRIEDRICH is a 1/20 Scale (4″) Maschinen Krieger Friedrich and for $90/£69 you can add it to your collection by purchasing HERE.

Klav is also currently working on a custom Kidrobot Munny & Dunny series, which you can see the work in progress (WIP) shots below. We can’t wait to see how these turn out. We’ll bring you more details once they’re known. 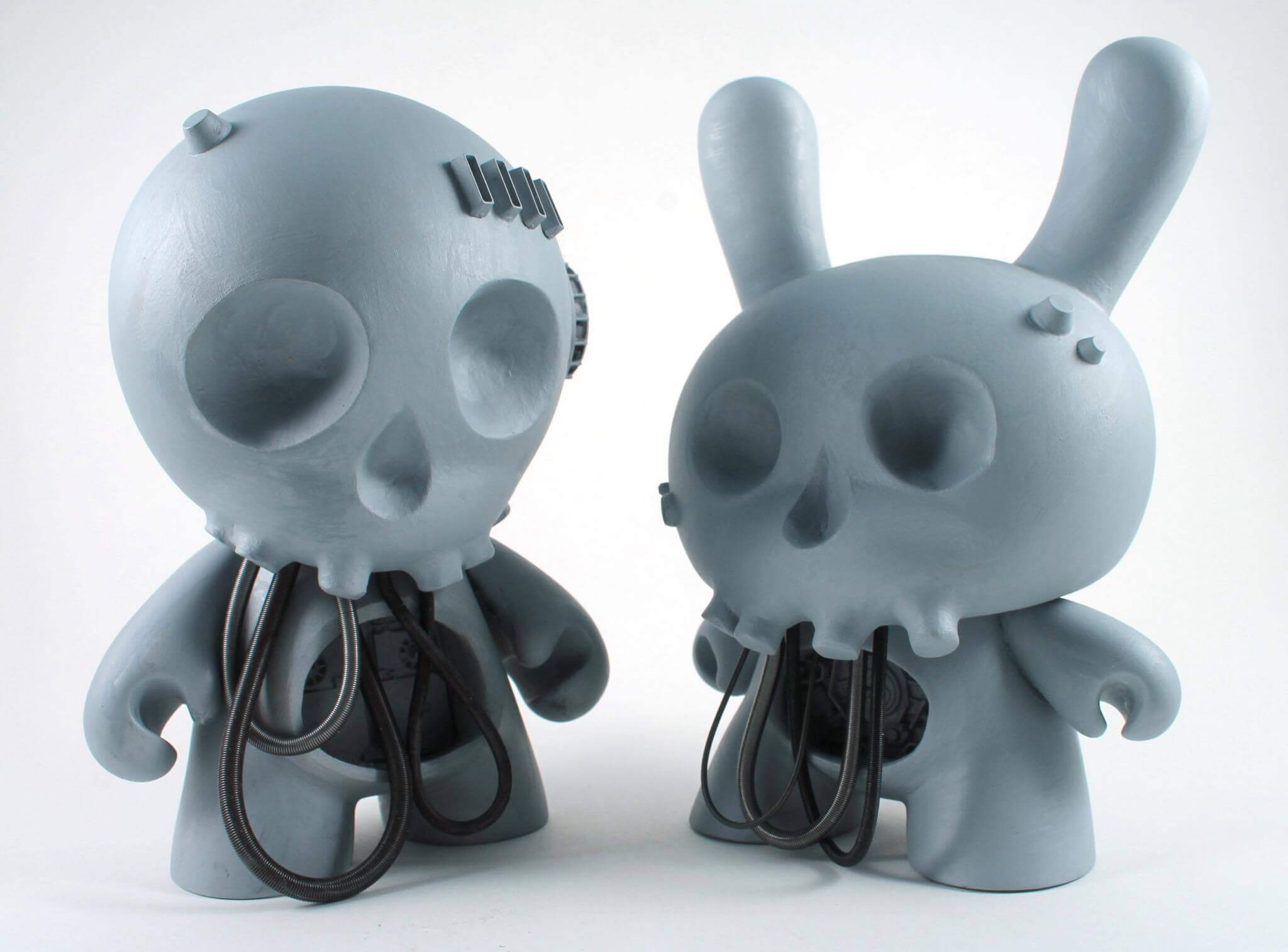 You should defo go check out Klav on his Instagram page HERE. We’re looking forward to seeing more work being added to the Creeping Death Robot Club! We want to be lifetime members too! Perhaps a pin badge, Klav!