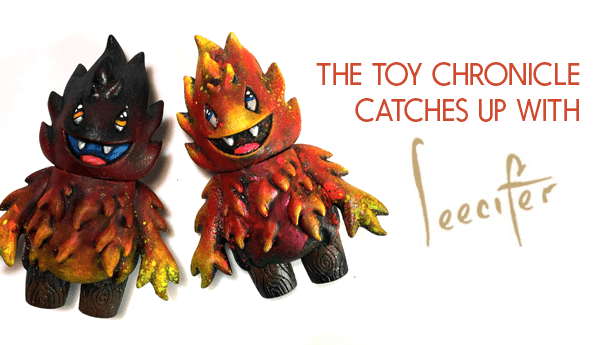 Back in October 2015, when The Toy Chronicle headed over to New York to attend the Designer Toy Awards we met Leecifer, a lifetime bond was formed. Leecifer & TTC had the honour of presenting the Best Resin award together that night. Was a great event. Now six months later we catch up with Leecifer, to get the lowdown on his career & future plans. 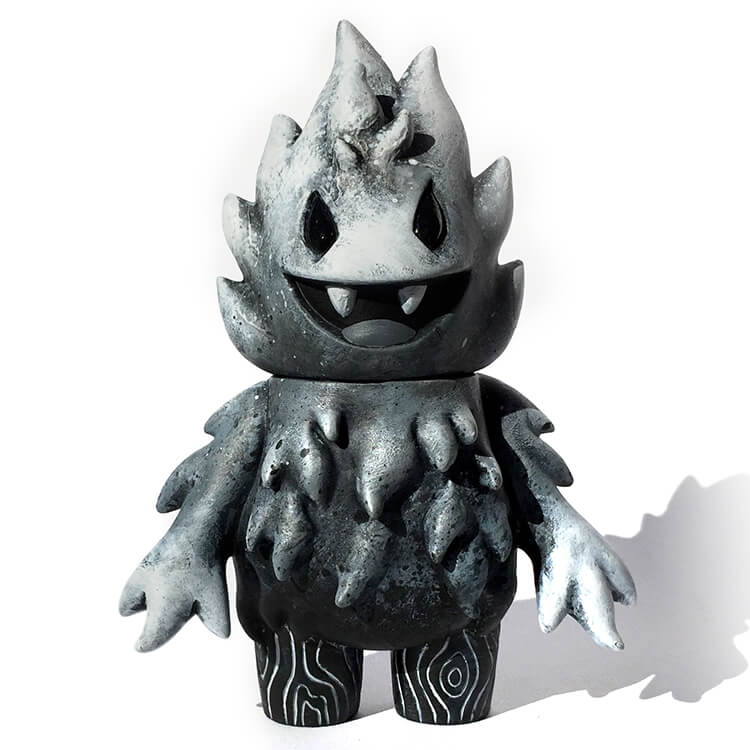 TTC: Hey man,thanks for taking the time to answer some questions for The Toy Chronicle! Always first off the bat, tell us who you are, what you do and how folk can find you on social media?

Leecifer: I’ve told this story many times and admittedly it changes as my addled recollection does. Name is Lee ‘Leecifer’ Gajda. I go by ‘Leecifer’ as I was christened with it as a wee small terror of a kid. In the late 60’s as a tiny child I guess I took a dump in the babysitters pool and tried to blame it on the family dog and some of the adults dubbed me Leecifer. Years later a singer in a band I was doing posters for gave me a shout out from the stage again as Leecifer and I’ve been using it ever since. 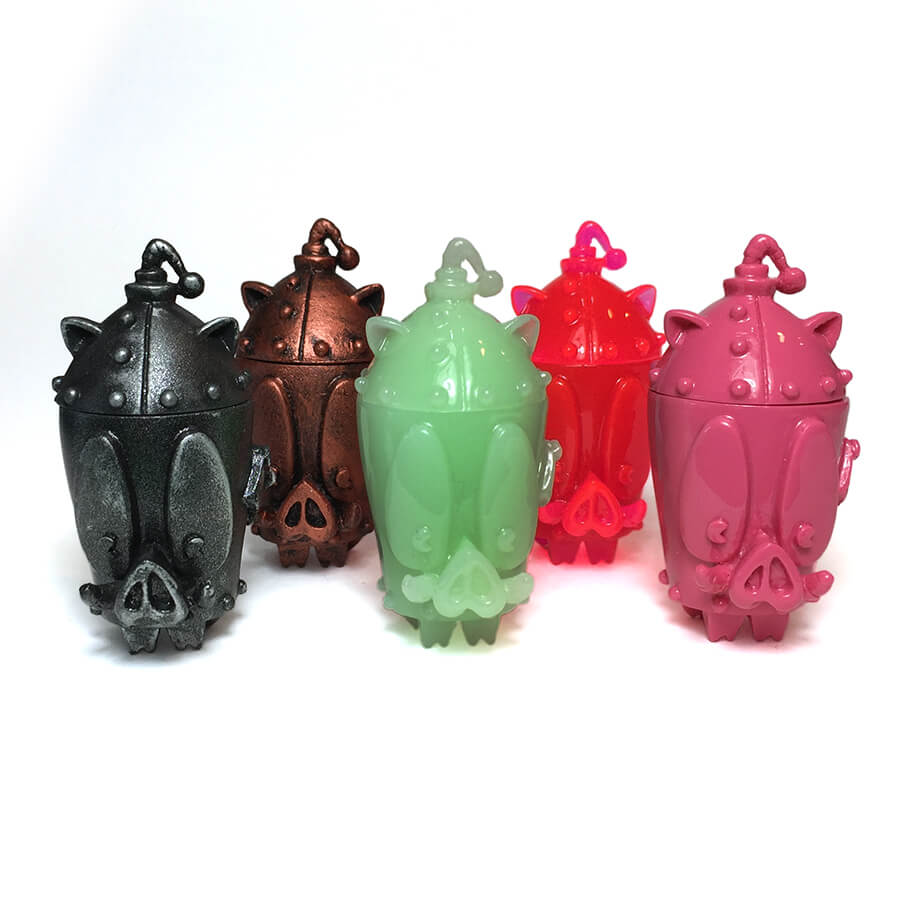 TTC: How did you get in to Designer Toys? Did you, or do you, collect?

Leecifer: Oh HELL yeah!! We used to have a great big giant house and I was constantly curating our various collections. At one time we had 14-15 Detolfs? And several thousand square feet of wall space for 2D paintings, gig posters and the like. Mostly SF/Westcoast centric urban contemporary artists. My wife and I encountered the toy scene as byproduct of supporting local artists. Having collected local art it was fun to have 3D representations from some of our favorite artists. 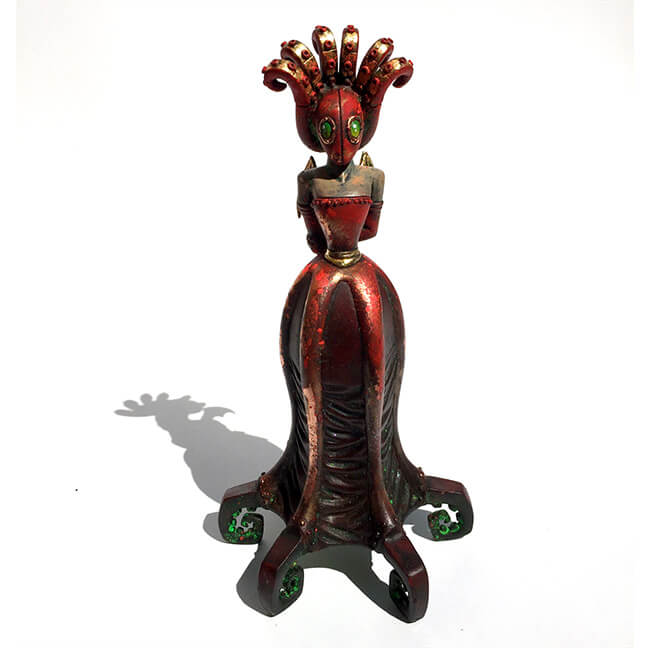 TTC: What was the very first piece that you customised?

Leecifer: This is another memory that varies every time I try to recall it, but this is the gist of it. With the exception of the multi-armed armed army men I horrified my family by making as a little kid, some of the first pieces I customized were Bounty Hunter and expensive kaiju stuff gotten off e-bay. After visiting Kozik to drop off my “Panda Meat” book submission (and drool at the MASSIVE collection of toys in his apartment), he mentioned this new place opening called Kid Robot (way cheaper fodder). I then butchered 3-4 cases of series 1 Dunnys. 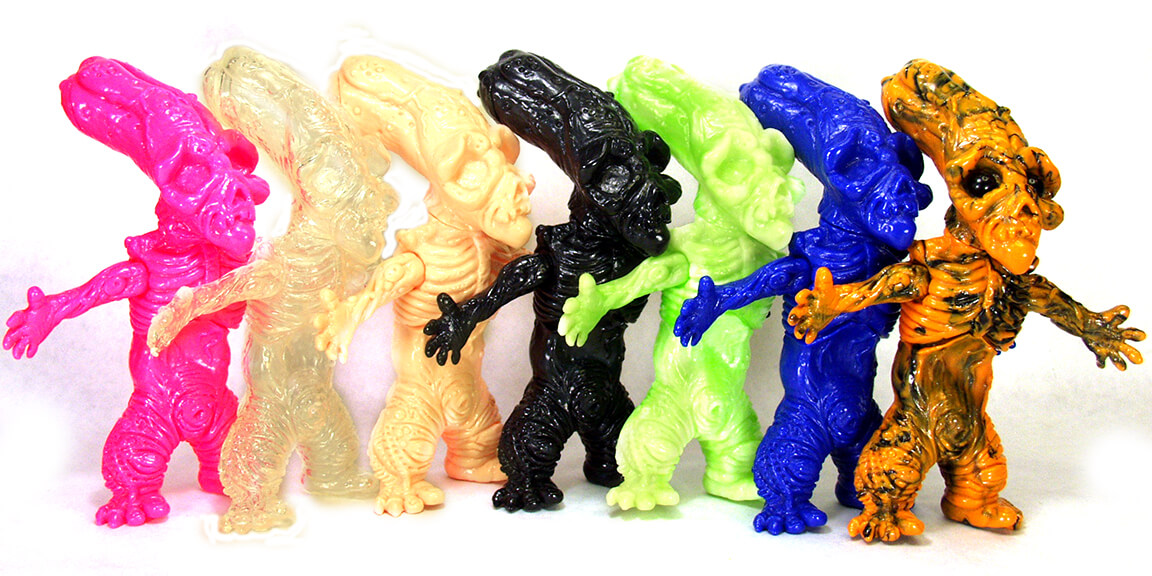 TTC: We want to know all about the Picklebaby? Where did that idea come from? One too many pickle backs?

Leecifer: Ok, first off you gotta tell me what a “pickle back” is? Is that some form of British “reverse cowgirl”, “donkey punch” or “Cleveland steamer” (don’t look THAT one up eeeuuucckkk)

The first hand-painted run of resin PickleBaby (I don’t ever write “babies” as it looked fucked on the header card) were part of the “Bat Butts & Goat Guts” exhibition w/with Paul Kaiju at Dragatomi in 2012. I wanted a “mascot sized” (roughly 8″ tall to the back of the head with a 7″ arm-span in this case.) piece that I could do whatever I wanted to with, whenever I wanted.

But the PickleBaby’s genesis is way before that actually. I had seen some ancient elongated infant skulls on display somewhere back when I was making gig posters and was fascinated. So this is gonna’ be something like 15+ yrs ago? I also remember seeing elongated baby heads in an archeology book as a lil’ kid. 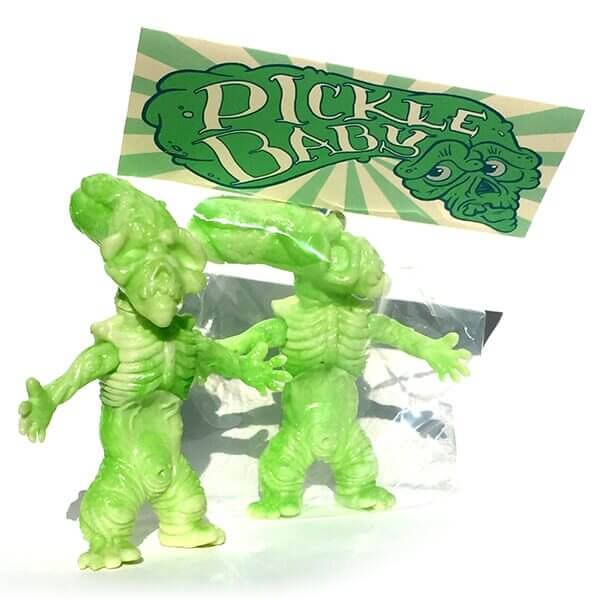 By my estimation he’s actually an alien that crashed into an abandoned cucumber field where a deceased farmer was buried w/ his last crop. Nearly vaporized, he oozed like a giant ameba on pseudopods, out of his crashed saucer (yup classic old school saucer) and fashioned a body from the farmers remains and the freakishly giant pickles readily at hand. If you look closely you can still see some of his alien DNA present in his right leg.

Friendly and curious to a fault, he can be mischievous, but often naively innocent, and thoroughly perplexed by humanity (who routinely find his shape anatomically suggestive) as he just tries to get by on our often inhospitable & hostile planet.

They like the art and music of our various cultures while also enjoying a hot soak, indulging a collective sweet tooth, comfort food, and a good beer (or whatever you’re into). PickleBaby’ are all about simple pleasures.

I should probably mention there are currently 7 different sofubi (Japanese soft vinyl) colorways loose in the wild and a ton of one-offs and micro runs by myself and others (Nebulon5 & Skinner to name a couple) I wanted a sofubi piece that fell between classic kaiju (even though PB isn’t a GIANT monster) and modern (dare I say Western) urban art toys. PickleBaby was something I could invite my friends and other artists to lay their own vision/style on. In fact there where some AMAZING ones crafted for the SubUrban Vinyl (RIP) “Little Green Men” Show. I wanted to give people an open invitation (now keep in mind – I don’t really want to see a bunch of resin multiples of it unless we’ve at least agreed about it) to participate. My motto has always been – buy a PickleBaby an fuck it up to your hearts content!!! He’s ready to “hug-out” any issue. PB came 300 gazillion lights yrs for a hug baby!!!

Editor note: Picklebacks are a shot of whiskey followed by a shot of pickle juice/brine. Surprisingly good. Yet oh so bad. 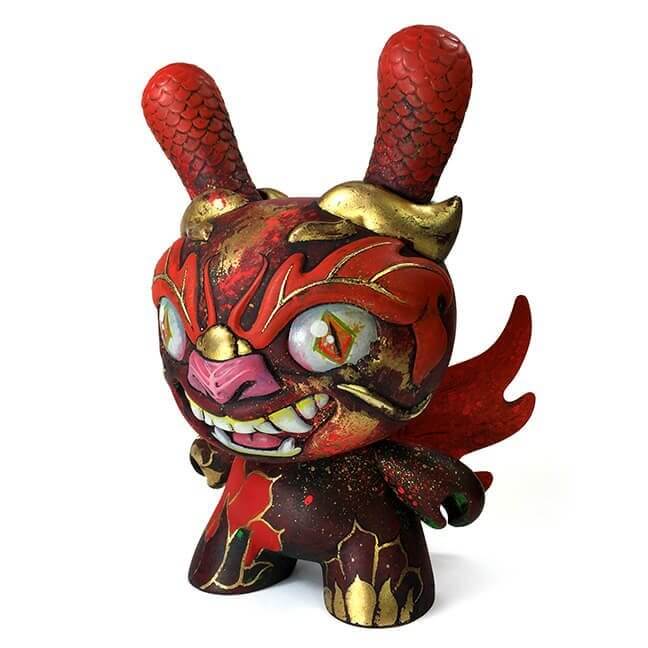 TTC: One of the many highlights from The Toy Chronicle’s trip to NYCC & the 2015 Designer Toy Awards, was presenting the Best Resin award with yourself. Was that as life changing for you as it was for us?

Leecifer: Hahahahah. It was!!! Though having been nominated before that was actually the first time I ever got to go to a Designer Toy Awards! And making a new drinking buddy from an exotic foreign land (just go w/ me on that one) was a bonus to be sure!!!! 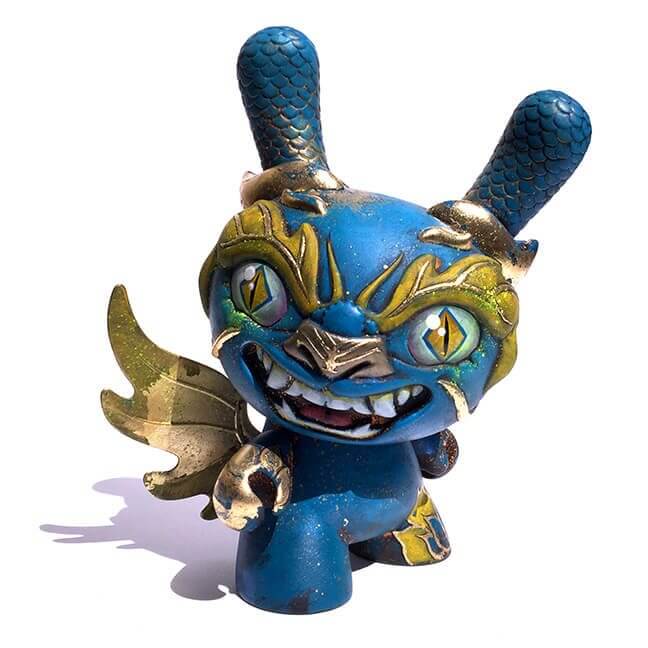 TTC: Who would be your fantasy line-up of Designer Toy artists to share a cold beer with? Don’t worry the two Robs from SubUrban Vinyl and I are already drinking with you, so you can go wild with the rest of your choices.

Leecifer: Well in no particular order and shit if you already got the Rob’s you can’t forget Benny Kline. Of course my current drinking buddy and hetro lifemate (Kevin Smith ref) Alex/Drilone & Super7’s Josh Herbolsheimer (all of Super7 for that matter), Scott Tolleson and his hetro lifemate Spanky Stokes, Brent Nolasco, All and I mean ALL of the Broke Piggy folks & before that the Toy Fam/Dragatomi (RIP) crew. Skinner, Yosiell, Jay222, Daniel Fleres, Valley Dweller, hell all the Norcal/Bay Area artist toy makers and otherwise, the Clutter Crew & New York/East Coast peeps. The LA folks. Europe & Asia. Damn I’m doing city, states, regions & continents and I’m not even close to covering everyone. I’m always down to have a beer w/ artists and toy folks. Just conservatively, not as many drinks as I once was willing to. 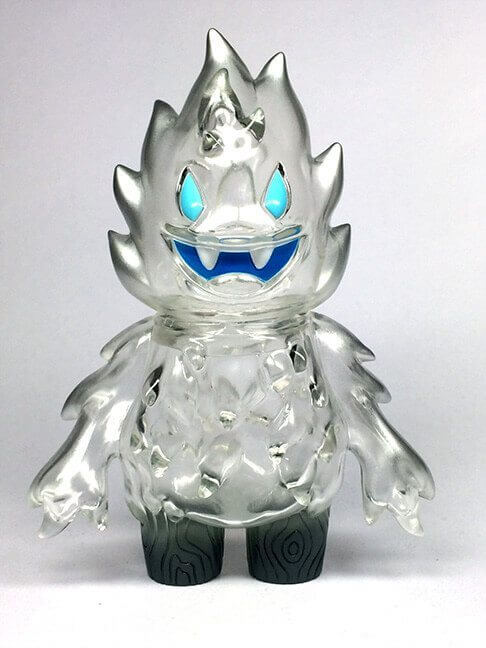 TTC: What are your plans for 2016? Any cool shows, releases coming up? How about a trip to London for ToyConUK? That has to be the dream, right? Come and crash at TTC HQ!

Leecifer: Well less shows & travel to start w/. I’m gonna’ spend the first part of the yr catching up on commissions (you can contact me via [email protected] for quotes & questions). A few off the top of my head have been Oinkerbot Poratrons produced by Broke Piggy (which BTW, I now believe they ship anywhere) . Some of Kid Robot & Scott Tolleson’s excellent Lotus Dragon Dunny’s. A Bella from your own DokA. And some of the large Steven the Bats from Bwana Spoons & Super7.

The first vinyl release for me this yr was another Honoo. And this one was amazing! Thanks again Josh Herbolsheimer, Brian Flynn and the fine folks at Super7.

In regards to ToyCon, well sadly as I write this ToyConUK has passed. You know it IS a dream and thank you bro! – I will gladly take you up on that offer at some point and crash at TTC HQ!!!!