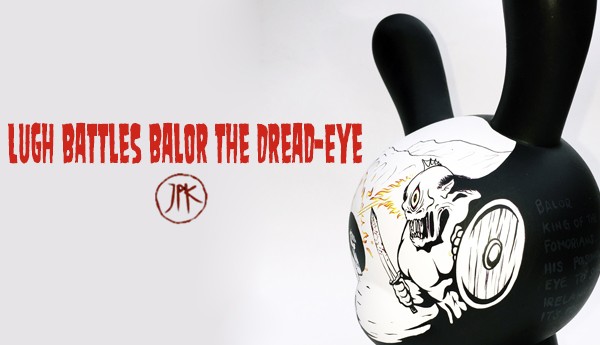 Jon Paul Kaiser’s client gave him an Irish/Celtic mythology themed Dunny, JPK treated like a canvas rather than a character. JPK went with one of the most popular legends, which is Lugh the High King and Protector of Ireland as he faces off against his greatest adversary; Balor the Dread Eye, King of the Formorians. Legend has it that whenever Balor opened his eye, whatever his dread gaze was easy upon would burn in ruin.
On the body go the Dunny is Oonah Sidhe, Queen of the fairies. She is summoning the power of the Earth Goddess through the ancient standing stones to assist Lugh in his battle. JPK has found some new colours with the red and yellows  ( just messing Jon)  nice touches having a diffrent tone of black/grey on the tattoos and the dashes of blood on the sword. Check out the minute cracks on the shield! they have blood marks imbedded within the cracks.
If you were hoping to grab your own piece of customised goodness, then you’re in luck! His commission book is open so go, go, go!
(Photos courtesy from JPK photographer Justin Allfree )