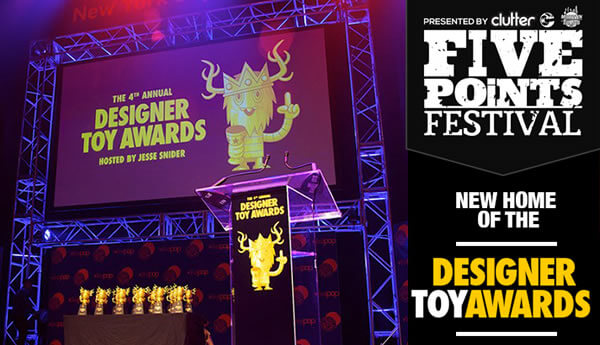 The Designer Toy Awards are super excited to announce a brand new home for the prestigious annual DTA ceremony – Five Points Festival! The antidote to the average con, Five Points brings tastemakers, misfits, and rebels together with the new, retro, and infamous, in a one-of-a-kind gathering.

Taking place May 20th and 21st at Pier 36, in New York City’s lower east side, the festival is kicked off by The Designer Toy Awards on Friday, May 19th!

Want to attend the Designer Toy Awards ceremony on Friday, May 19th, 2017?

I personally attended last years DTAs and what a night it was , I rocked up in an uber and after a really stimulating convo in the taxi I met RX Seven in a BBQ bar and grill before the show to practice our lines as we were presenting the best DIY platform award .. turns out beer doesn’t really help haha so much so we nearly missed the Q to go on haha anyway I digress ..
Its so great to see the toy community celebrating the hard work and passion everyone brings to the scene
Gary and myself will be heading out this year and WE CAN NOT WAIT!!

Get your exclusive ticket, only available with the purchase of a Five Points Fest VIP Ticket, and rub shoulders with the Art Toy luminaries. Limited to 250, they are selling super fast, so make sure you secure yours now!

Nominations for this year’s awards ceremony will be officially opened on Monday, March 27th, 2017! We would appreciate it if you could encourage your readers to submit their favorite toys and artists from 2016!!

Nominations will be considered for releases between January 1st, 2016 and December 31st, 2016!

There is no shame in self-nomination, nominations are private and confidential, so no one need even know!

This year is going to be huge, Clutter have some big announcements coming your way, so watch this space… and get ready!!
stay tuned for all the details coming soon ..

“About the Designer Toy Awards”

The Designer Toy Awards (DTAs) are the leading awards honoring excellence and innovation in the Designer Toy art field. Established in 2011, the DTAs are presented by Clutter Magazine— a leading informational organization within Designer Toys, a community that after more than a decade has become a prominent and legitimate form of artistic and commercial expression as well as a leader in global trendsetting.

Reflecting the tremendous and ongoing growth of the Designer Toy community, the DTAs celebrate the best of the industry’s artists, designers, and brands, as well as honoring those involved in championing Designer Toys throughout the world. Members of the DTA Board select the majority of finalists and winners in each category from the nominees, however, you — the online community — determine finalists and, in some cases, winners by voting for nominated work, individual or brand that you believe to be the best in each category. Each year, the DTAs bring together the Designer Toy community all over the world.

Since 2004, Clutter has been the go-to destination for creatives, companies and collectors, providing regular in-depth trend analysis directly from the vinyl frontier where fine art meets fine artifacts.

The world’s premiere source for counterculture and art toy information, Clutter brings neo-pop, dark surrealist, and street artist collectible figures, to our dedicated readership who rely on us to keep them informed on what they care about most.

With a high-quality, FREE, monthly print magazine, dynamic online portals, an art gallery, and the first industry-established annual award ceremony, Clutter is the catalyst for a uniquely active and vocal community engaged in the serious business of work and play.