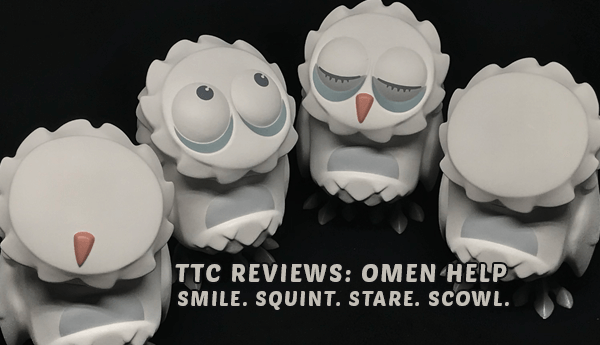 Finally, I have managed to open my Coarse Omen Help figures. It’s only taken me months to do so. Andy kindly brought these back from Thailand Toy Expo (TTE) back in May, and he kindly did a video review of his set back in August, which you can watch at the bottom of this post. Released at TTE as a set of four. Squint. Smile. Stare. Scowl. Available in 3.5inch and 7inch versions.

What I love about this particular Coarse Omen release is that they’re more of a Designer Art Toy series than many of the Omen releases that came before. The whole Help series feels different. The blank faces of Scowl & Smile, speaks volumes, despite what their names suggest. The same with Squint & Stare. Both quite the opposite of what the face of the Omen portrays. Coarse haven’t done this by accident, they want you to look at each Omen and think outside of the nature of what we expect.

The Coarse Omen divides opinion amongst Coarse collectors. Some believe that the Coarse Omen was the beginning of the end for Coarse. The downfall began when they first released the Omen back in 2013, according to some. I can confirm that I am not in this group of naysayers. Before 2013 I hadn’t really found much that interested me from a Coarse perspective. I could certainly appreciate what they released, but nothing caught my attention. The Coarse Omen opened that door. In fact, it opened the floodgate. Secondly, the Omen allows for a larger audience too. We’re not talking $$$ for these releases. We’re talking $20. More folks can afford these, they can be produced in larger quantities for more fans to enjoy. They’re also a little bit of fun. Cute too. Probably too cute for some Coarse collectors. Fair enough.

Thirdly, the Omens allow Coarse to invest money in the dark releases that so many Coarse fans love. Money doesn’t always flow freely in the Designer Toy scene. It’s a niche market. Yes, there are thousands of us, but that doesn’t make it any easier for companies such as Coarse to splash their cash on new releases. Omens allow Coarse to fund art releases such as the new Ethos range – Cells & Strangers. In our opinion, anyways.

Surprisingly there are still Designer Toy stores with Coarse Omen Help still in stock. Both Collect & Display & Tenacious Toys have the 3.5inch version of Omen Help, as well as the 7inch versions too. You can purchase them on Collect & Display HERE and Tenacious Toys HERE. You can also find a code to get money off for both C&D and TT over on our Discount Code page HERE. Every penny counts! Strange Cat Toys have a small number of the Omen Help available too.

As I promised, you can watch Andy’s video review of Coarse Omen Help 3.5inch set! Enjoy!

Whilst we have your attention, we have almost 850 downloads of our TTC Mobile App in the last two months! Phenomenal support from you guys! We’d love to hit 1000 downloads by our 4th Birthday on 28th October, can we do it? Yeah, we can. Only with your support though. If you’re on an iPhone or Google Android phone, hit the images above and download our app! Designer Toy news direct to your smartphone on a daily basis! Beautiful!