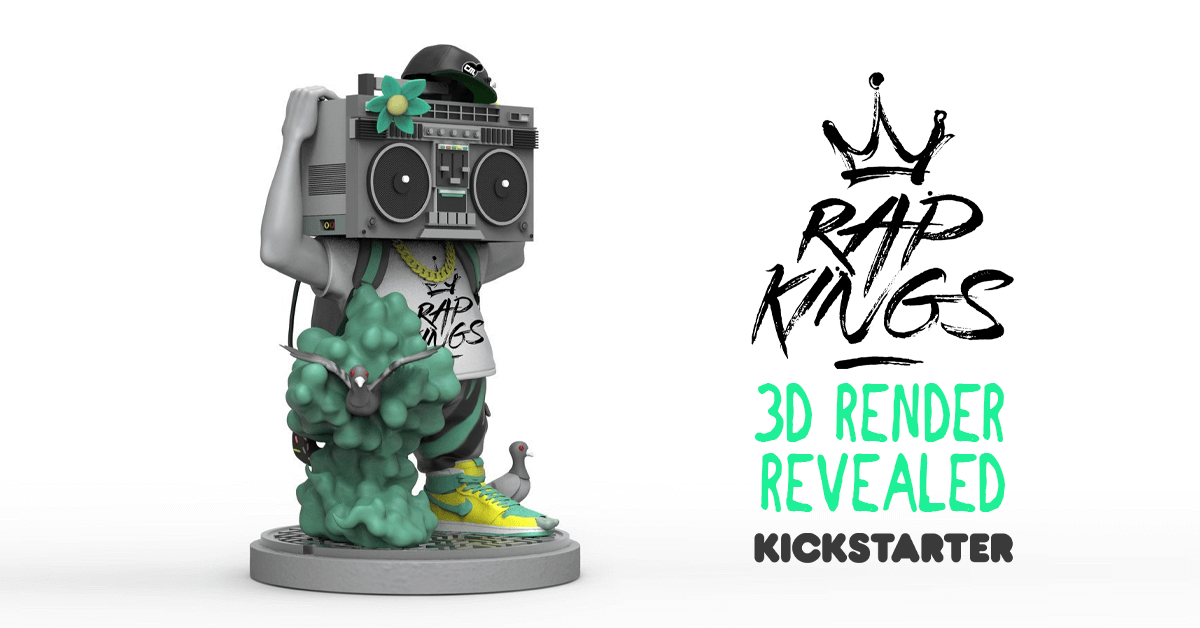 Last month we brought you news of a hip-hop related Kickstarter that we thought would tickle your fancy. From the mind of Chris B. Murray we introduced you to Rap Kings, a limited edition collectible figure that had us purrin’ when we first saw the original designs from Chris. With 21 days left of the Kickstarter campaign, Chris has now revealed the 3D renders AND WE ARE BLOWN AWAY WITH HOW F’N AWESOME THEY ARE!! Check them below!

Scuplted by our friend Concrete Jungle, Rap Kings is a 10inch resin boombox head. We have already backed this Kickstarter as we were thoroughly impressed with just the vectors, but now seeing the 3D renders we implore you to get involved too so that this Kickstarter reaches its goal of $11,500 by 4th October.

BACK RAP KINGS on KICKSTARTER HERE

It is safe to say that Concrete Jungle has really brought to life the Rap Kings concept. We are absolutely enthralled by the design work done by both Chris & Steven @ Concrete Jungle. We really hope that this campaign hits its goal so that we can get our hands on Rap Kings in the early part of 2020! Go back it now!

I’ve been living / working in Philadelphia, PA as a freelance artist since 2008.  I started the RAP KINGS illustrated series in 2017 after deciding to put my love for art, hip-hop music and popular culture to good use.

Since then, I have gained a following and grown the series into something that I’m sincerely proud of.  For years I have been waiting for the right moment to release the first RAP KINGS toy and finally that time is here.

As the campaign carries out, I’ll be continuing to work on the toy itself including the 3D- sculpt, the packaging design / inserts and of course, a much needed name!  All of which I’ll be uploading to the campaign’s feed so that you will get updates at every step of the process.

BACK RAP KINGS on KICKSTARTER HERE