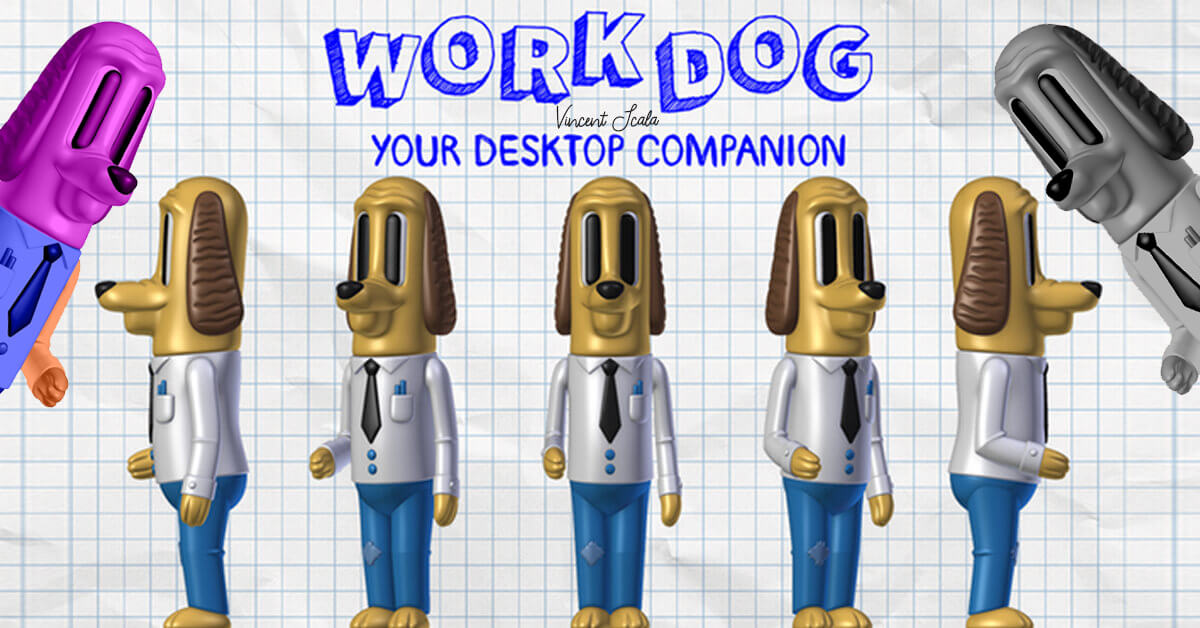 Vincent Scala gives you an UPDATE for his . 40 more backers would put this campaign over the top !! This toy will come with 2 heads – Regular and Angry! All backers will get the accessories as well. Plus the comic and the pin. Here would be the choices available to the backers. All prices and tiers stay the same, the toy also becomes 8″ Killer deal. $35 for ” Soft Vinyl Toy BARGIN.

From the man who brought you two fully funded Kickstarter campaigns, Vincent Scala is back! After bringing us the Mickey Monster Vinyl Toy  and Lucky Cat. he’s turning another of his characters into a vinyl toy. Following the success of his Kickstarter campaigns now It’s time for the 6″ Vinyl Figure Work Dog: Your Desktop Companion.

I have been a professional illustrator for the past 14 years. I have worked for Nickelodeon, Disney, Atlantic Records and Fisher Price. I have also animated and directed music videos, which have had over 2 million viewers as well as shown in galleries throughout the NYC area. I also have a pilot of my own show called “Dia De Los Tacos” on Nickelodeon.

I’ve had the pleasure and honor of having my toys sold in some pretty big toy/gift stores worldwide and have successfully sold out my first run of Mickey Monsters. The designer toy community has welcomed me with open arms and I have made friendships and connections that will last a lifetime. The most important part of all of this is that the world is responding to my toys. I have been following the goal that if they keep selling, I will keep creating them! Enough of me and let’s get to the good stuff. The toy !!! Meet Work Dog !!!

Work Dog started as a simple comic strip that I kept going back to create more of. As a professional designer, my road has not been a glorious box of crayons and unicorns. I have had to put up with piles of corporate [email protected]# as well as office politics and nonsense. I not only created Work Dog, I have lived it, as I am sure many of you out there have as well ! As an artist, I did the best thing I could and that was find a funny way to show these situations. They were not only therapeutic for myself but as I posted more on my Instagram (vincentscala), I realised that there are a-lot of people who have felt the same way and could relate to Work Dog. He is anyone that has either had a tough boss, or a tough job in general. Like “Elf on a Shelf”, Let’s help spread the “Dog on a desk”. – Vincent Scala

At 6″ tall this forcibly smiling dog can be there to make you laugh when you just want to cry or throw some paper. There are 3 points of articulation. Both arms as well as the head. One of his arms is bent for typing/holding a post it, holding a pen, or just reaching out to touch you ! His forced smile is perfect in every way. This amazing 3D model was created by a good friend and very talented artist Vin Diresta (vdiresta13) – give him a follow !
The sculpt is as close to my original drawing as I would have liked. It’s simple yet detailed where it needs to be.

There are a ton of extras included in the tiers, not to mention the base price of the figure ($35/26GPB). For an 8 inch vinyl figure, this is a no brainer.

I want to try and keep the rewards simple. We know what your here for. The toy ! There are always fun extras that I like to add to make it fun and interesting but I want to keep it simple.
Toy, Book, Pin & Stickers for Everyone !!! I will give you all the option of getting them separately or together !
Stretch Goal:
If I cam hit the $7500 Goal l will be creating an App/Game where you can play as Work Dog and swipe papers and smash computers in your own glory !

Check out the campain and to back the Work Dog: Your Desktop Companion click HERE https://www.kickstarter.com/ where you will find the FULL details of the campaign and funding Breakdown. This project will only be funded if it reaches its goal by Fri, March 8 2019 4:15 PM.