Last stop for Unbox Industries “GLOW SHOW”! All aboard Toy Station HK as the shows final resting place back home in Hong Kong. Like we said previously, How does soft vinyl, UV reactive, glow in the dark goodness in all your favourite characters and platforms from Unbox Industries? Good right? Over the past couple of weeks, Unbox has been showcasing all-new new UV series via all their social media platforms and causing pandemonium. Dan from Unbox took the hot seat at Marsham Toy Hour Podcast and gave you all a little hit of this “UNBOX GLOW SHOW” event. Already hit COUNTRIES, UNBOX GLOW show as it reaches home and below is a little tease of what you can expect at the show.

Unbox are thrilled to announce that we are going to cap off the Unbox Glow Show tour with a final event at @toystation88 in HK.

The touring show was a bit of a gamble but the support of @milkboytoys @pakka7 @retroband & @toumbido created some very special moments for both us and the collectors in every country we exhibited.

We already have a couple of interesting show ideas for next year that will once again span the globe. Watch this space! 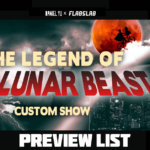