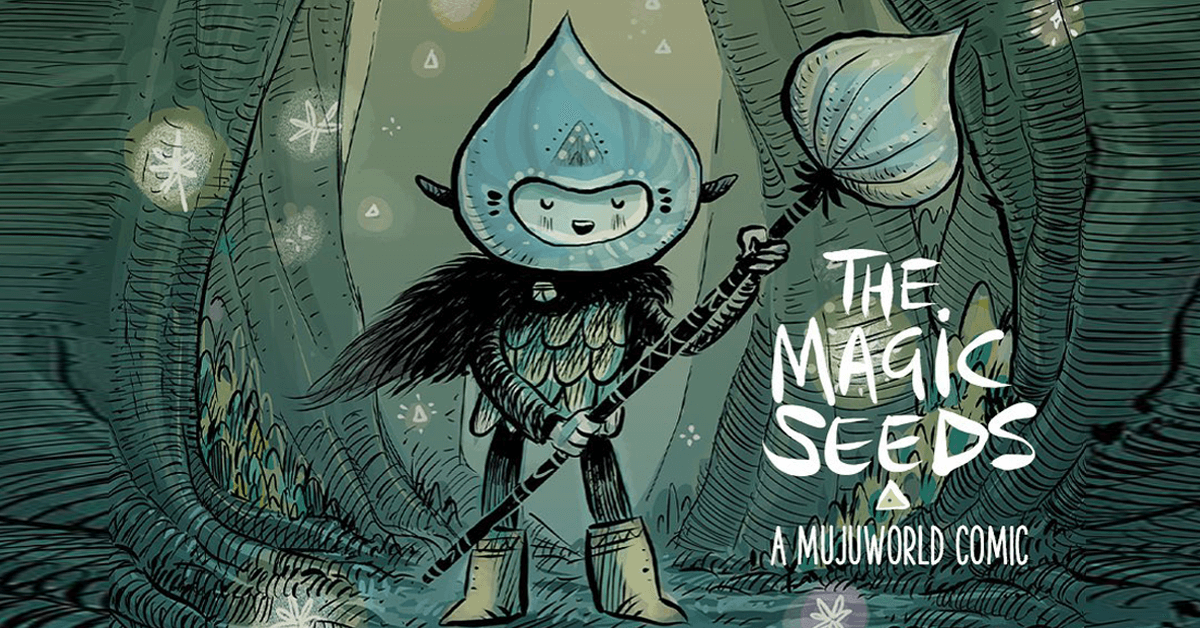 Thanks to Theresa at Marsham Toy Hour (and not IG for their dumb algorithms) for her attempted additional Leak & Sneak Peeks towards the new The Magic Seeds – Mujuworld Comic Kickstarter that launched this past week. The first comic book featuring the spirits of Mujuworld on a magical journey of discovery. Illustrated by Mr Muju!

Go on a whimsical adventure through Mujuworld with Mr Muju and this imaginary dimension where the landscapes are alive and populated by a diverse range of Spirits. The natural environment of Mujuworld is cared for by a wide variety of beings, including Tree Spirits, Leaf Spirits, Ocean Guardians and Cosmic Owls.  You may find them wandering amongst the Happy Hills & Mystic Mountains.

The Kickstarter for The Magic Seeds starts at £25 for the hardcover version of this comic. With several other reward levels that can be backed. The goal was to hit £2500 but October 13th but the goal has been smashed already and heading towards £5000!!! Don’t forget that with Kickstarter, the funds are not taken until the END of the Kickstarter campaign. So as long as you have funds available on October 13th, you can back the campaign today!

I have always wanted to create a Mujuworld Comic for a worldwide audience.  So I started to develop a comic book idea that used images to create a totally visual narrative, a story suitable for all ages no matter what language you speak.

The process of storyboarding this comic has taken many months of development and editing.

I now have the complete book worked out and illustrated.

The inking has been finished and I am now working on the final colour artwork.

There will be over 60 pages of full colour illustrations in the book.

For the resin heads amongst us all, there is a £75 reward that will see you take home the Magic Seeds book & Daydreamer Sculpture. A 3inch resin hand-cast figure made in Muju Studio. This is a Kickstarter Exclusive colourway, and limited to 50 pieces, of which only 26 remain. Go back the Kickstarter HERE.

There was an additional resin 8inch sculpture available – the Magic Seed Collector – but this was limited to 3 piece for Kickstarter (Price: £430). This has since sold out. Boooo! But still go back the other levels of this Kickstarter HERE.