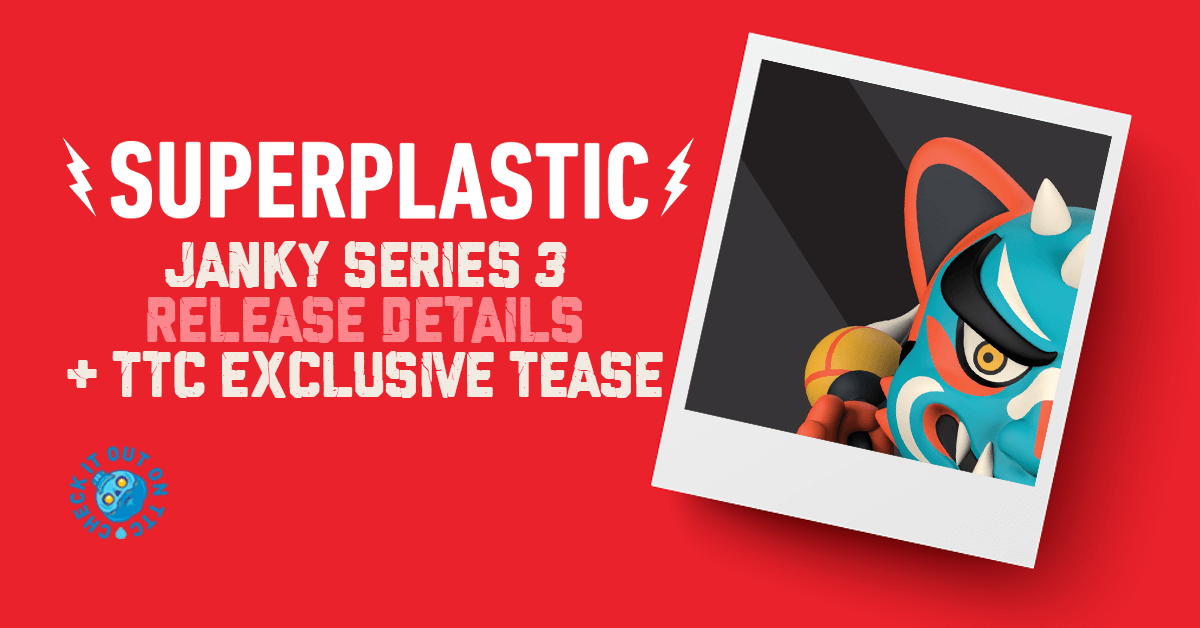 It has been anticipated that Janky Series Three by Superplastic was coming soon, with folks on social media reaching fever pitch with their excitement for this popular worldwide series! We now have the details to reveal, plus an EXCLUSIVE tease of one of the designs for Series Three!

We already knew from previous teases, some of the designs that would make up Janky Series Three, but now we have an idea of who will be in the series, plus the all-important RELEASE DATE too! Let’s first take a re-look at the Janky designs that we knew were going to be making it into this third blind box series with Superplastic! Designs by Anna Cattish, Junko Mizuno and Pete Fowler all whetting the appetite of collectors earlier this ear

Now that we have taken a look at the previous teases, how about a proper look at the new TTC EXCLUSIVE tease that Superplastic sent to us yesterday! It’s only a small tease, but a tease nonetheless! It looks like a mask is coming to play, as you can see the small slither of elastic under the ear of Janky.

As we mentioned above, we know that Pete Fowler, Anna Cattish, Junko Mizuno are part of Janky Series Three, but we also now know that Sentrock & Guggimon will make up five of the FOURTEEN artists that will make up Series Three. We are told there are 20 designs that will be S3, with hundreds of new molds!

Now, we have been holding out on giving you the release date of Janky Series Three, do you think it’s time? Yup!

But good news for those that are in the SuperFam with Superplastic, you’ll get an early release next Wednesday 23rd September, where they will be treated to special incentives and reveals! Woooooooo!

Are we excited for this new Janky series? Who else do you think will be part of this series? We are promised new & old artists to Superplastic, so it is exciting times for Janky collectors! Keep your eyes on TTC as we get more information!