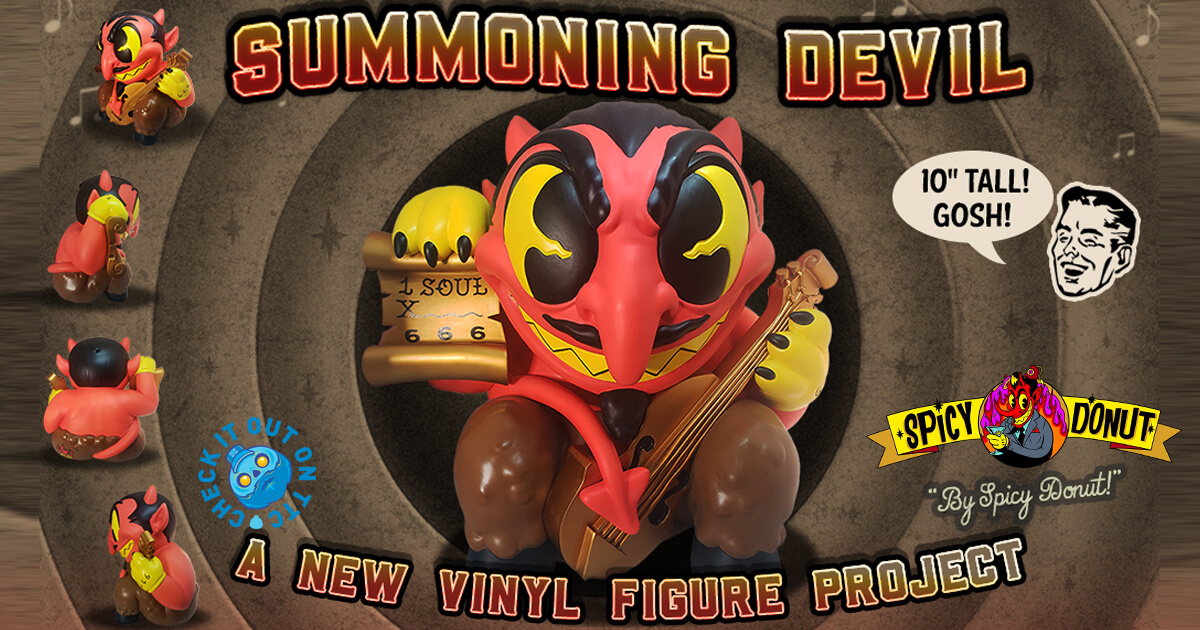 Its been a week since we featured the Summoning Devil – A 10″ Vinyl Figure by Spicy Donut HERE! Now the official crowdfunding campaign has officially started! the huge new vinyl creation from Spicy Donut! The devil is looking for a contest and he’s bringing a shiny fiddle made of gold!

Austin, TX based artist, Spicy Donut is ready to add some HEAT into the scene with Summoning Devil! With the love and flair for classic cartoons plus a dark sense of humor, Spicy Donut most familiar series of horror slashers known as merry murderers or Spicy Donut series of devilish delights enamel pins with a kustom kulture kick takes Spicy Donut art to another dimension!

Spicy Donut has long dreamed of making his own vinyl figure. Collected toys since Spicy Donut was a kid and fell in love with art toys. From painting dunnys and munnys, Spicy Donut gone to trading parties. Even written articles for clutter magazine and other toy blogs. I’ve attended and sold at Designer Con. Fast forward to the present day and finally, Spicy Donut has a chance to put his own work out there! Making a figure is an expensive process and crowdfunding is the only way Spicy Donut can make it happen. Now you can be apart of the project and while you have the chance to be one of the first to own “Spicy Donut “Summoning Devil vinyl designer art collectable!

Spicy Donut is teaming up with Aaron White who has helped Mondo make toys for years!

His attention to detail and quality is top notch!