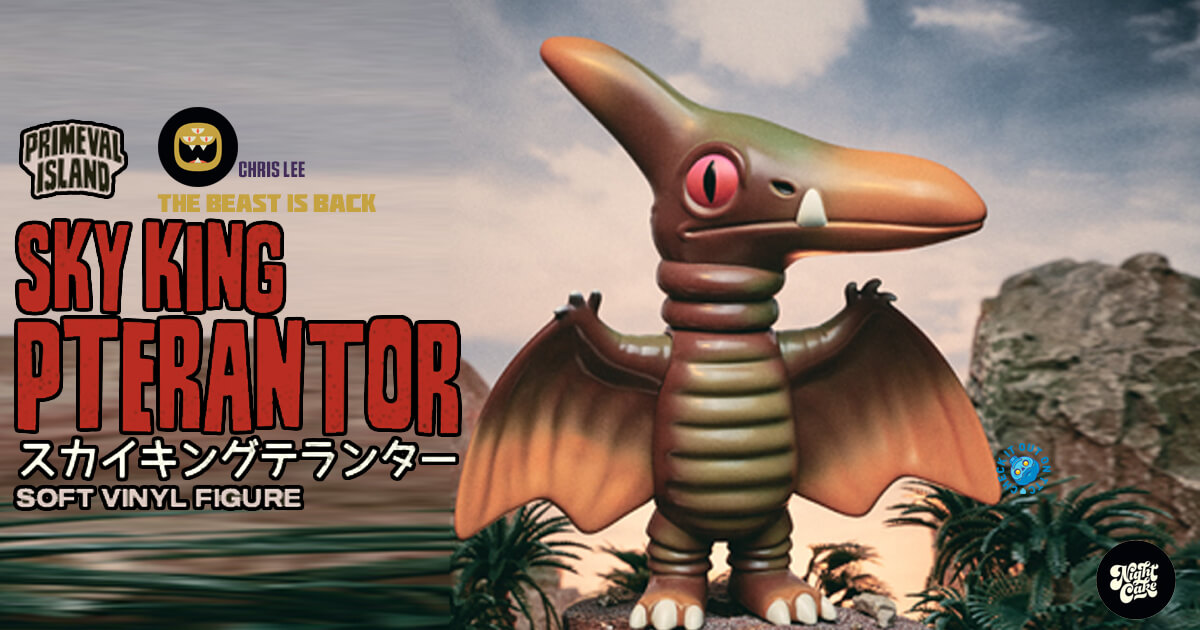 Need proof that dreams do come true? cast your minds back around 11 months ago when the world just started to go crazy, Yesterday we got the heads up that Sky King Pterantor PRIMEVAL ISLAND Series By Chris Lee The Beast is Back, has actually been produced! Close your eyes and picture an overweight yellow boy jumping up and down over the exciting announcement, HA. As much as we love Rhino Beetle, the Los Angeles based illustrator and designer, Chris Lee has his uber cool Rhino Beetle transformed into a resin art figure! Chris landed 2 spots on the already released Kidrobot “City Cryptid” Dunny series with 2 Dunny designs and plenty of other vinyl goodness way back. The Rhino Beetle comes straight out of his Moss Kingdom series and NOW MAKE WAY FOR Sky King Pterantor from PRIMEVAL ISLAND Series! YES, The Beast is Back!

Behold, Pterantor! I think I’ve FINALLY dialled in that name thanks to an assist from @hasunow. So many of you went on this prototype painting journey with me. I appreciate all of the comments and enthusiasm! The next step is to get this reviewed by the factory. Here’s to hoping the figure can get made exactly as it is.

A little about the photo shoot:

I wanted this to feel like something you’d see in an old toy catalog. The fog effects were achieved using my household steamer () and some Atmosphere Aerosol. The Aputure 300d II is using a lantern modifier and is flagged to control the light spill. I realized many of old toy catalog photos have the light focused in one place and I think flagging is the key. I used three Aputure MC lights for the red “lava” accents along with one Philips Hue Bloom shining against the fabric in the back. –Chris Lee The Beast is Back

I tried rough sculpting an idea I had swimming in my head out of some cheap Sculpey bricks. I’m kind of infatuated with pterosaurs and always wanted to make my own kaiju based off one. I’ve never sculpted anything before, so I found video on YT about making a basic armature and dove in. The final result was… serviceable? . What’s important is that it got me more excited about pushing the idea further. I reached out to @danterockford (a super talented sculptor I discovered by chance on iG last year) and asked if he would be interested in taking my rough idea and transforming it into what I wasn’t able to make on my own.

I worked with Dante refining the sculpt over the course of a few weeks and this is the end result! @propsandpop (who I hired to help with my resin Rhino Beetle project) did a very rough print in the size I’m considering for this figure, 7″ (or 18cm), along with the absolutely massive 12″ (or 30cm) jumbo version which I’ll be painting as a one-off for display. I’ll be starting the paint job on the jumbo this weekend and I’ll be posting my progress here so you guys can follow along.  .

The sculpt was built with three points of articulation: the left and right arms, along with the head.

The next step is getting in touch with a few manufacturers that were recommended to me for quotes. I tried to be mindful in my design choices as the soft vinyl process has limitations in terms of how pieces get pulled from moulds. If this can’t be produced due to technical reasons, it’ll be disappointing, but at least I’ll walk away from this project with some cool things for my desk. –Chris Lee The Beast is Back

For us, the bonus has been to see Chris showing the behind the scenes process of making of this little beast!

• Comes bagged with a header card⁠

• Produced in soft vinyl. Made in China

• U.K. shipping is temporarily suspended due to new VAT rules. I hope to resume shipping to the U.K. soon!