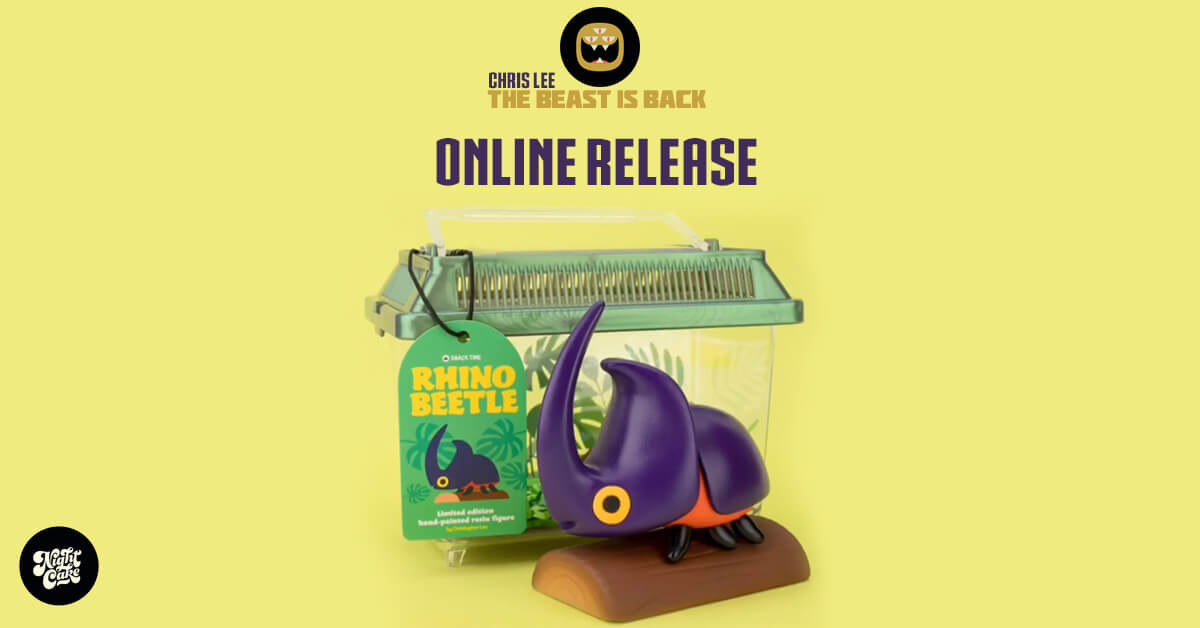 Way back in September 2018  Chris Lee aka The Beast is Back won over our hearts with his uber cool Rhino Beetle.

Like we said previously back in September HERE, Los Angeles based illustrator and designer, Chris Lee has his uber cool Rhino Beetle transformed into a resin art figure! Chris landed 2 spots on the already released Kidrobot “City Cryptid” Dunny series with 2 Dunny designs and plenty of other vinyl goodness way back.

The Rhino Beetle comes straight out of his Moss Kingdom series and we look forward to more to come from the series if its anything like the prints/paintings already done by Christopher Lee. Sculpt and casting are being done by Paul Tanompong of ‘Props and Pop’. As Chris quotes via Twitter “resin figure for DesignerCon” which we got to see in person but sadly we couldn’t fit into our luggage T_T. Today Chris has confirmed a small amount has been finished and ready for an online release!

This isn’t the way I wanted to reveal the packaging, but I literally have to leave to go set up in an hour. Due to multiple deadlines, I almost didn’t pull this project off, but I’m glad everything worked out.
.
When brainstorming for a packaging solution, I came across these mini critter carriers and they were just PERFECT. I had static clings printed so I could make a little foliage backdrop for the figure.

Each carrier comes with a beetle, log, and the sticker patch that inspired this whole project.

Please note some of these are prototype photos.

WHEN: Friday 1st March 10am PST

There will be a third (and final) release with a bunch of custom colourways
and finishes that I’ll be working on in the coming months. This will mark the end of the hand-painted resin version of these little guys.⁣⠀