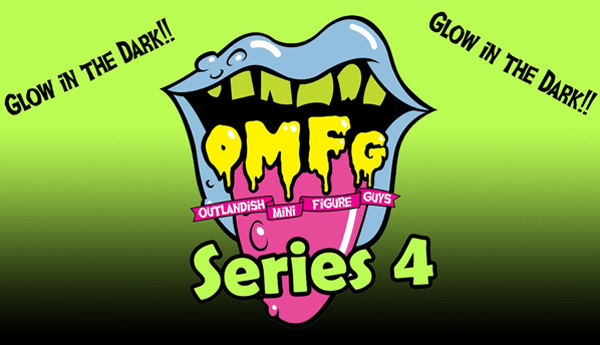 You already know that The Toy Chronicle can’t say no to anything glow-in-the-dark, that’s why we jumped all over the new Kickstarter launched by October Toys this weekend. They’ve taken their OMFG Series 4, and given it the GID treatment. They’ve already hit $2530 of their $3300 target, so well on its way to a success, but if want to receive our GID mini figures, we need you to go pledge now on their Kickstarter page HERE.

1. Fossil Freak designed by Michael Stearns from Washington and sculpted by George Gaspar from California

4. Tree Witched designed by MudMarox and sculpted by GormTransMonster from Italy

October Toys are also including a GID OMFG enamel pin badge too. This is a $10 add-on, but worth it just for the GID action that will be included (although the GID isn’t shown in the pic below, the plan is for the OMFG letters to Glow in the Dark)

So what are you waiting for? Go and pledge your support for this mini-series now on Kickstarter HERE. Pricewise, the series is relatively cheap. You’re looking at $12/£9 for the figures plus shipping. That’s for the five figures PLUS the added bonus of their Brainwave figure too. Nice.