Muju Studio takes on another Kickstarter campaign and already hit their target before we even had the chance to tell you guys. First of all congratulations to the Muju Studio smashing their target of $1,387 and already on $2,019 with 29 day to go! Having met Muju Studio at ToyCon UK 2015 and seen their work in person we are glad the Star Traveller Sculpture being successful and fully deserved. Even though the project has been fully funded they still need your help to get some nice stretch goals in place if they plan that for the project. If not then you will have a chance to get the gorgeous Star Traveller Sculptures.

“There are 10 billion galaxies in the observable universe.
Each time we look up into the stars the same question arises…
Are there other beings out there?

The possibilities of intergalactic travel and the concept of multidimensional reality inspire our creative vision.  It is this fascination that led us on the journey to create the Star Traveller.
It began life as a drawing in a sketchbook, and from there we developed the concept and sculpted it into it’s final 3D form. We then created a mould and cast the sculpture in bio-resin in our studio. The prototype sculptures were then handpainted and varnished.

With your support we hope to release the Muju Star Traveller to a worldwide audience.” This reward is for the Galaxy edition of the Star Traveller sculpture. Each of these sculptures is hand painted in our studio in a dark blue and green iridescent colour with silver face and highlights. This reward is for the Nova edition of the Star Traveller sculpture. Each of these figures are hand painted in a blue colourway with silver highlights.
They stand 6cm / 2.5″ tall and come boxed. The Nebula Star Traveller is cast in a clear tinted bioresin.  Encased in the resin are some glittering particles which catch the light as it shines through the figure.  There are even a few stars floating in there for extra cosmic details.  Each one is unique, as the clear blue colour fade varies with every cast we do.
This figure stands 6cm / 2.5″ tall and comes boxed. “Each Star Traveller sculpture is totally handmade and hand-painted by ourselves, which also requires a big investment of our time.  Pre-order sales through this Kickstarter campaign will enable us to fund a production run of this handmade sculpture.”

http://kck.st/1Thkkuu  for the fill Kickstarter info.

(all images lifted from Muju world ) 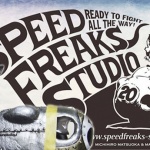 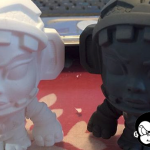