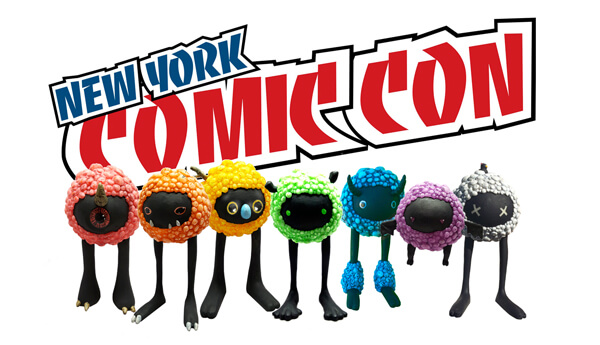 With more teasing then a stripper, Kyle Kirwan finally sheds some light and fully reveals his line of up NYCC 2016 exclusives. Brace yourselves for the NYCC takeover.

“After many hints, allegations, and things left unsaid here are the full details of my Block-Wide New York Comic Con release”

Here’s the rundown of where to find them and how many are available:

Red (10): Arsine will be available through Big Kev’s Geek Stuff at booth #401 Green (10): Chlor is hanging out with MyPlasticHeart over at booth #113 Purple (10): Stibine will be flying around the Clutter Magazine Booth #603 White (5): Florine is the only one that’s going to take some work to find. It’s being released through For The Masses Podcast and you’ll have to follow them on Instagram (@forthemassespodcast) to find out where they’ll be (legitimately) hiding. But the fun doesn’t stop there! Each colorway has a one off variant and there are SIX golden tickets hidden randomly in the boxes. These tickets are good for a secret Bloom colorway that will come out early next year. As always these are part of a larger world. Here’s a little bit of back story on the Cavus Blooms:

One of the things I was most excited about upon entering Manchester proper was a chance to encounter the rare Cavus Bloomus that reside solely within the kingdom. There has never been a proper study of them, so I’ve spent the last few years interviewing anyone who has encountered one of these fascinating subterranean Blooms. From my research I have learned that there are at least six distinct varieties of this subspecies and they are somehow frothy. Nearly every subject has reported that the Cavus Bloomus “smell and bubble.” It is unfortunate that with my breathing apparatus in place I will be unable to verify their odor for myself. I’ve also heard there are marked physical differences between each hue and they are almost nothing like the more common Terra Bloomus that reside in the rest of Dor. My theory is that Cavus Bloomus are mutated Terra, physically changed by years of exposure to the multitude of gasses in the caves. There are tales of fluffy footed Blues and single-eyed Reds. According to some the Purples possess stumpy little legs and fly about. Yellows and Greens are said to be friendly and less wary of the Cave People. No one knows much about the Orange beyond the fact that they definitely exist. I look forward to encountering these creatures myself for a chance to apply the Naturalist Scientific Process to their study.

There are seven GID colorways being released. Each piece measures 5.5 inches and is selling for $30. -Kyle

Don’t cry if you can’t make it to NYCC, Kyle has a few blank 5.5″ Resin Bloom and Bitey Bloom DIY figures at http://kylewkirwan.storenvy.com/