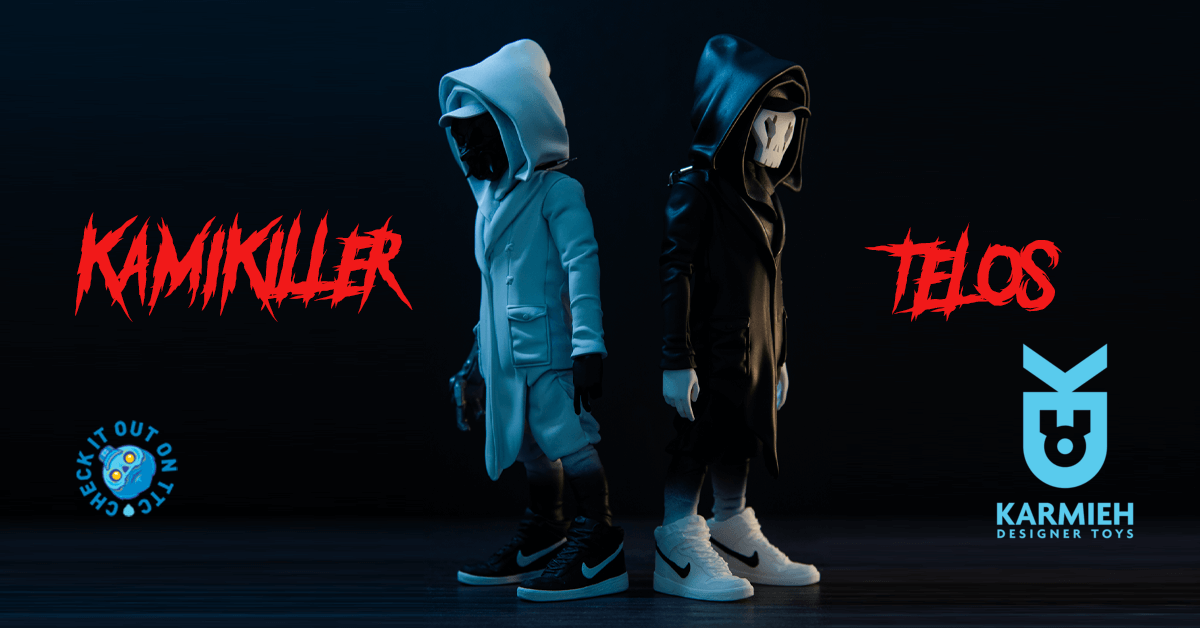 When you are great at making toys come to life for others, it also means you’re f’n good at making your own toys come to life too! That’s exactly what KARMIEH Toy Design has done with this two latest designs! We could wax lyrical about the KamiKiller & Télos Bonum et Malum Edition, or you could just watch the two videos that KARMIEH has produced below…

See, they look f’n aces, right? Want to know more details on how to order these figures? Look beneath, and you shall find…. but first, the backstory…

Created from the ashes of Telos, Kamikiller had one purpose, hunt down and annihilate Telos.

In their first encounter, a battle of epic proportions has ensued. Kamikiller forged from the ashes of Telos, was almost as strong as he, almost but not entirely.

Being trained by the grandmaster Ursos and fighting Lykos for so long has taught Telos a handful of techniques that gave him the upper hand to defeat Kamikiller.

Being a worthy adversary Kamikiller might have lost his arm but not his purpose. After their first clash, injured but not crushed, he fled into the underworld for another chance to fight again.

But this time around Telos is coming after him, and he will be aiming for the head.

KamiKiller, which you can see in the images below, stands at over 8inches tall and made from resin & wood. Each comes with a detachable Coffin and Lykos Sword. Limited to only 20 pieces, KamiKiller is priced at $299. KamiKiller is hand-signed and number, and comes also with limited edition Telos enamel pin, as well as signed & numbered prints of Telos , Lykos, Kugaki, Leonardo, Foxy Latte and Bob Cafea.

Télos, also seen below, stands at over 8inches tall too. With a detachable coffin and scythe rather than sword, Télos comes with the every else that comes with KamiKiller. Also priced at $299, and limited to 20 pieces. You can purchase Télos using the button below!

If you want to support The Toy Chronicle, we have a number of options available to you. We have started to stock a wide range of releases that we think you will enjoy. Ranging from production pieces from Superplastic, Unbox Industries & POP MART, to original pieces from our favourite artists. Purchasing one of our pins also really help. A quick, cheap way to also support the TTC is by making a small donation. These can all be completed below through our online shop. We appreciate all the support! Thanks!