Strap in and get ready to enter the Telos Multiverse! Karmieh Industries makes a return! Some say it’s a rebirth, we class it as the evolution as the next chapter is here. Karmieh’s Telos expand into the Multiverse and draging you with him. Coming in various colourways 7 to choose from all with the signature scythe and machete!

Abandoned when he was just an Infant, he grew up on the streets and survived doing petty crimes to stay alive.

On a freezing night, he died while sleeping on the streets.
But Death saw something in him and decided to bring him back to start training as an apprentice.

Stands over 5 inches tall
Detachable strap and machete
Accessories: scythe and machete
Materials: Resin, Leather, rubber
Hand-painted
Stickers and Telos buttons included
This is not a pre-order, all orders will be shipped out after the order has been placed. 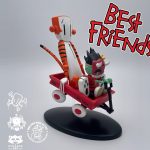