It’s official, after the rumours floating around the internet over the past few months, Instinctoy has just announced a lotto release for Kai Kai & Kiki Blue eye ver Instinctoy edition by Takashi Murakami.

The green-eyed version It debuted at , which was taking place in LA in 2018. The first sale was at the Kaikai ＆Kiki booth! Fast forward to 2019 and Blue eye ver Instinctoy Editon of Kai Kai & Kiki comes into fruition.

World-famous contemporary artist Mr.
Takashi Murakami’s character art vinyl figure
『Kaikai＆Kiki（BLUE eyes ver.）set』will be available at INSTINCTOY as we are the sales coordinator for this edition.

These products were sold out very quickly and in high demand. However, this COMPLEXCON exclusive project was carried out by the manufacturer. Mr Takashi Murakami allowed them to use his design’s licence, but he was not in charge of its production. Thus, it was not a project that he was fully satisfied with.

※ Only winners will receive a prize announcement mail. After getting the mail, if you have any questions regarding the lottery results, please contact us.

We will start shipping from 8th April Japan Time and when the payment has been received. Please be noted there is a possibility that the delivery will be delayed by  1~3 days for certain reasons.

Please understand the【Terms & Conditions】before you enter the lottery. The sale page is shown below.

For English, please use a PC or laptop to make your applications. (It only shows up in Japanese on the cellphone.)

＜Product Details ＞
– Designed by Takashi Murakami
– Size: Kaikai 239mm / Kiki 200mm
– Package Size: 385mm x 290mm x 145mm
As these figures are coated by hand, there may be variations in each figure. We seek your kind understanding in this.

While we have your attention, Look out for the Takashi Murakami × INSTINCTOY SOFUBI Project Launch

http://www.instinctoy.blog for more detailed info for the release. 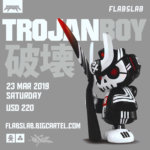 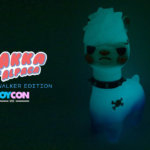